Some of the greatest talents in karting will compete in Finland this weekend for the 2019 FIA Karting World Championship in the OK and OK Junior categories.

Organised by AKK, the Finnish ASN, the Flying Finn Race will take place at the PowerPark circuit at Alahärma near Kauhava. It will be the first time that the prestigious titles have been decided in Finland, a country with a rich history in what is a historic and important area of motorsport.

Many of those competing will have dreams of making it from karting in Formula 1, following in the footsteps of Finnish heroes like Mika Häkkinen, Kimi Räikkönen and Valtteri Bottas. Even top-level Finnish rally drivers Esapekka Lappi and Teemu Suninen honed their skills in international karting competition.

More than 200 drivers, among them some of motorsport’s most exciting young talents, will take part across the two classes this weekend, representing 44 countries and five different continents. Finland is by far the best represented nation at its home event, with almost 50 drivers entered. 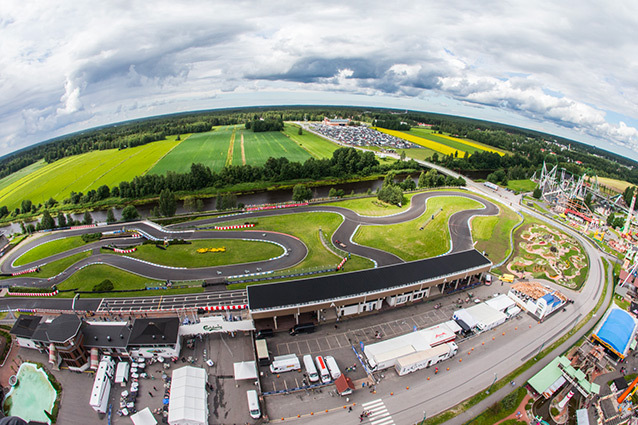 OK: The champion defends his title

After his triumph at Kristianstad in Sweden one year ago, Italian driver Lorenzo Travisanutto returns to the Nordic region to defend his crown. Since that, the Kart Republic driver has also won this year’s FIA Karting European Championship title, which he secured at Le Mans in France in July.

Second to Travisanutto over the four-round European series and tipped to be among the leaders once more is his young compatriot Gabriele Mini, the Parolin driver who has impressed on his step up to senior level after finishing second in last year’s world championship in OK Junior. The favourites also include a pair of British talents, Dexter Patterson and Taylor Barnard, driving Kart Republic equipment under the patronage of the Sauber Junior Team and Rosberg Racing Academy respectively.

The top 10 on the entry list, based on the final standings of the European Championship, also includes two Finnish drivers, Juho Valtanen and Nikolas Pirttilahti. Valtanen (of the local Kohtala Sports team) is looking to improve upon his third-place finish in the same event in Britain two years ago, having won another Finnish national title this season. Pirttilahti – a team-mate of Travisanutto – will hope to continue his strong debut season in the OK class. In all, there are 21 drivers from Finland set to compete in OK.

– Our goal is to get brighter medal this time, after bronze in 2017. It’s very possible, if everything goes well and we have a problem-free weekend. So far everything has gone well. In the rehearsal race weekend, we were quick and got good test kilometres. We know for sure that we have a good package.

The track is very cool: It’s very quick and different compared to many others. I personally like it a lot. There will be many quick drivers for sure: I would guess that the top 10 from the European Championship will also be quick here, Valtanen says.

Other names to look out for include Pedro Hiltbrand, the 2016 champion, the Red Bull junior driver Harry Thompson and Sebastian Montoya, the son of grand prix winner Juan-Pablo.

OK Junior: Taponen takes on Amand and the rest

Having clinched the FIA European Karting Championship title at Le Mans, Franco-Finnish driver Marcus Amand (born in Oulu) will bid for another major triumph on his other home soil. His chances looking good, driving for the same VDK Racing squad that won the title in 2018 with Victor Bernier and 2016 with Victor Martins.

Tuukka Taponen is one of those most likely to stop him. The Kohtala Sports driver won the first round of the European series in Angerville in April and finished fourth overall, as well as claiming the Finnish OK Junior crown. He leads a total of 28 drivers flying the flag of Finland in OK Junior: almost a quarter of the field.

– The rehearsal race weekend showed that the speed is there. Our aim is set high. I have driven here in Alahärmä a lot when I was younger and of course now before this weekend, so I have done plenty of laps here, Taponen says.

Another favourite is the Italian driver Andrea Kimi Antonelli, runner-up in the European champion, driving for Rosberg Racing Academy and already on the books of the Formula 1 champions Mercedes as a junior driver. The Dutch driver Thomas Ten Brinke was third after Le Mans, leading the charge for Ricky Flynn Motorsport.

In addition to the World Championship sports, on Saturday the PowerPark will have an astonishing park closing festival with fireworks and amazing evening party with some of the hottest Finnish artists. And there is even more entertainment on Sunday before the finals as The Finnish Air Force’s aerobatics team, the Midnight Hawks, will make a spectacular display in the sky to celebrate the finals.

Head to Finland for the 2019 World Championship

Mini’ poleman in the OK World Championship in Finland

Lappalainen, Finnish Driver of the Year