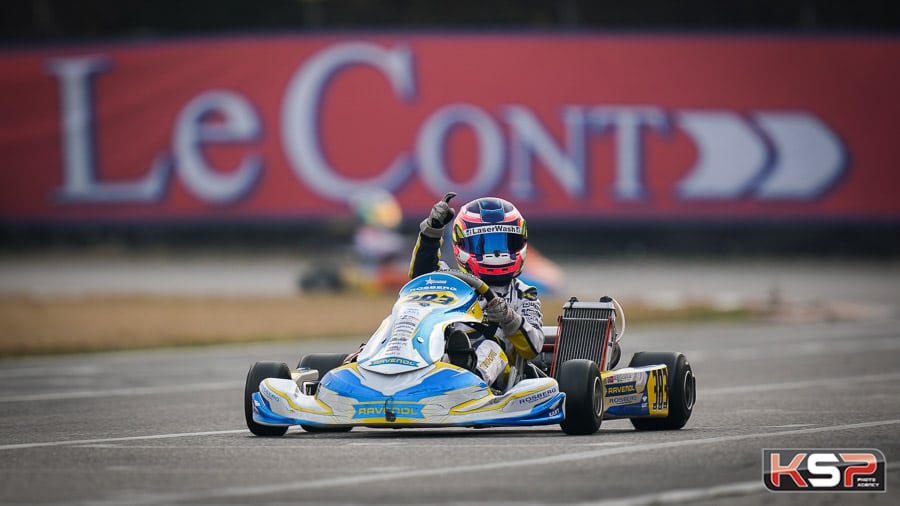 Arvid Lindblad (KR/Iame) and Alex Powell (Energy/TM) took over from Martinius Stenshorne (KR/Iame) at the start of the OK-Junior Winter Cup Final while Tymoteusz Kucharczyk (RK/TM) was relegated to 9th position. Lindblad moved up to 1st position on the fourth of the 18 laps. Powell dropped back, while Karol Paciewicz (Tony Kart/Vortex) was 3rd ahead of Brando Badoer (KR/Iame) and Akshay Bohra (Kosmic/Vortex). Stenshorne responded and regained control. William MacIntyre (Sodi/TM) was in the top 15, while Evan Giltaire (Sodi/TM) fought back after a complicated start.

The battle continued at the front of the race with a group of four drivers neck and neck: Lindblad and Stenshorne swapped 1st place under the watchful eye of Badoer, Pasiewicz and Bohra who had joined them, followed by Kucharczyk. MacIntyre retired after the halfway point. Pasiewicz took the lead while Lindblad dropped to 6th just ahead of Freddie Slater (Kosmic/Vortex). Kucharczyk was very incisive and moved into 3rd place, a second behind Stenshorne. Stenshorne attacked on the last lap and won ahead of Pasiewicz. Pasiewicz was then disqualified for trying to put his spoiler back in place, Badoer took a 3″ penalty for a bad manoeuvre and Slater was 2nd ahead of Lindblad. Kucharczyk was 4th ahead of Bohra after a rough finish. Giltaire took 13th place and Macéo Capietto (KR/Iame) finished 22nd.