There was an exciting day of qualifying heats in mixed weather conditions at the Flying Finn Race on Saturday, as drivers battled to be in contention for the FIA Karting World Championship titles in OK and OK Junior.

On home ground at the PowerPark circuit at Alahärma near Kauhava, in the event organised by AKK, Finnish drivers came to the fore in the OK category. Juho Valtanen won three of his four heats on Saturday and Nikolas Pirttilahti won two, while Rasmus Joutsimies is also among the leading contenders, consistently inside the top four in his heats.

In OK Junior, the going was tougher for some of the local contenders despite some strong performances. The Dutch duo of Thomas ten Brinke and Laurens van Hoepen starred together with the Brazilian driver Rafael Chaves Camara.

On Sunday, the last of the qualifying heats will determine which 34 drivers in each class make it through to the finals, to be held from 15:10 local time. 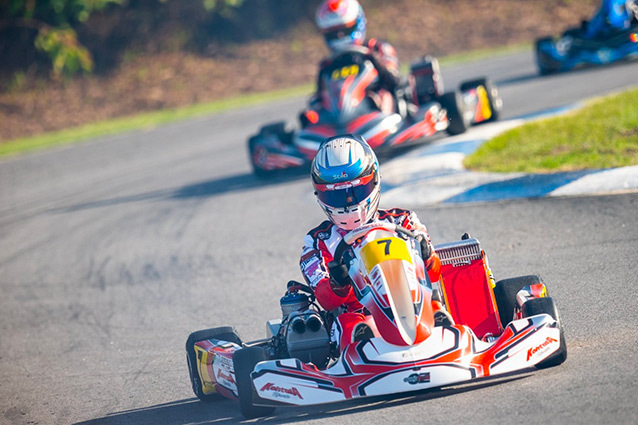 After Friday’s qualifying practice there were two Finnish drivers among the top four, with Juho Valtanen second to Gabriele Mini and Nikolas Pirttilahti in fourth behind Joshua Dufek. Valtanen (Kohtala Sports) promptly won his first heat (in which Pirttilahti had to retire) before taking fifth in his second. In the afternoon, after the heavens opened, the two Finns came into their element, dominating proceedings and taking a pair of wins each.

Valtanen is currently top of the standings with just one more heat to run on Sunday. While Pirttilahti (CV Performance Group) is making up places after his difficult start and is 22nd, Rasmus Joutsimies (Energy Corse) joins Valtanen inside the top six after a second, two third-places and a fourth during the day.

Dufek (Sauber Karting Team) is Valtanen’s closest challenger after a win in his third heat, with reigning World and European champion Lorenzo Travisanutto also in a strong position despite being yet to win. Dilano Vant’hoff (Forza Racing) won a heat and was always in the top four, with the Russian driver Kirill Smal constantly in the top five. Mini (Parolin) suffered an early setback before beating Taylor Barnard to win a particularly exciting heat, contested on slick tyres on a wet track.

“ The whole day has felt good, three wins and one fifth. In both wet and dry conditions, we have been able to win heats, so I’m very happy. I was actually surprised about my speed especially in wet, I was very good. Now I’m the leader in the heat points, and tomorrow we’ll have the last heat. Let’s try to make it as good as possible to get pole position for the final. Then it’s flat out and we’ll see where it will take me eventually; hopefully to a good result, but we’ll see about that tomorrow! ” Said Valtanen.

” It was quite a good day. We had some technical difficulties and I had to start the first race from the pits. After the start I overtook some drivers, but after a good moment I hit another driver. In the second heat I had a good start and I was first but dropped to the fourth place. One driver went off the track and came straight back on in front of me. The last two races were wet: the first one was an easy win, the second was a bit tighter. I have good speed in both weather conditions so it doesn’t matter which one we have. Let’s continue tomorrow from where we ended today”, Pirttilahti adds.

The Dutch drivers flew out of the blocks, with Thomas ten Brinke and Laurens van Hoepen notching up five consecutive heat wins between them for Ricky Flynn Motorsport. They ended the day first and second in the points, ten Brinke finally beaten in his fourth and final heat of the day by the Brazilian Rafael Chaves Camara, who matched his tally of three wins by excelling in the wet.

Second in qualifying practice, the Forza Racing driver took the first of his wins in a race that had to be suspended after two laps due to torrential rain. Andrea Kimi Antonelli also looked good in the rain, ending his day with two wins to finish in the top five along with Josep Marti, winner of his first heat in the morning. Behind them, the American Ugo Ugochukwu, Austrialian James Wharton and the Russian Nikita Bedrin, who had been fastest of all on Friday.

The Finns enjoyed a strong start to the day in OK Junior, with Samuli Mertsalmi and Tuukka Taponen placing second and third in the opening heat. Taponen was fifth and sixth in two of his other heats but had a spin in another in soaking conditions, leaving him 30th in the points at the end of the day. Mertsalmi is the highest Finn in 16th, with Veeti Rajala, Patrick Hakala, Hugo Heinonen and Henri Sääskilahti all currently joining Taponen in the top 30.

FIA Karting World Championship: Mini on pole in OK and Bedrin in Junior