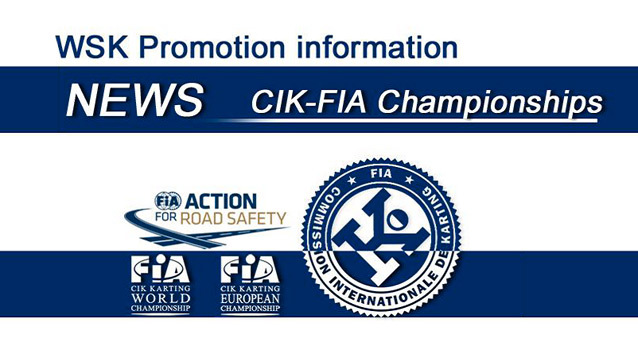 The European CIK-FIA KZ and KZ2 Championship starts next weekend with the first out of three rounds in schedule for the 2015 season. Two other categories, the KF and KF Junior, complete the official CIK-FIA calendar with three more rounds for the European trophy. From 16th to 19th April, the International Circuit Napoli in Sarno (Italy) hosts the season-opener: the remaining rounds will be hosted by the circuits in Zuera (Spain) and Genk (Belgium). The last two rounds will be run together with the first two rounds out of three of the CIK-FIA Karting Academy Trophy. The 1,699 metres of the Italian track will officially open the CIK-FIA season; as usual, the first events in schedule are the European Championships, which will be followed by the World Championships.

A world wide TV promotion.
CIK-FIA and WSK Promotion are at their third season together. WSK promotes the European and World Champioships and its media coverage includes – as usual – the live streaming of the events on the channels available on cikfia.tv and cikfiachampionship.com. The high moment of the live streaming will be on Sunday 19th April, with the final phase of the round, which will be broadcast starting with the drivers’ parade. The following week, the appointment is with the special reports on the TV channel Motors TV.

The protagonists in Sarno.
Two seasons ago, Max Verstappen made his debut in KZ and won the European and World KZ title in 2013: now, he is behind the wheel of a Toro Rosso F.1. Last year the European KZ title went to the Belgian Rick Dreezen, while the Italian Andrea Dalè won in KZ2. Both of them will be taking part in the race of Sarno in KZ, together with the reigning world champion Marco Ardigò. There are 92 entrants to the Championship, with the top class which can boast a long list of big names such as the Belgian Jonathan Thonon, the Dutch Bas Lammers, the French Arnaud Kozlinski, the British Ben Hanley and Jordon Lennox-Lamb, the Italian Davide Forè and Paolo De Conto. The race for the KZ2 title, after Dalè stepped up to KZ, sees 65 talented drivers involved: the first of them in the entry list is the Italian Fabian Federer, third in 2014.