The entry list for the Mondokart.com FIA Karting World Championship – OK & OK-Junior in Sarno is back to the highest levels that were recorded in 2018. More than 200 drivers from 49 nations are registered for this world event, which will take place in Italy from 15th to 18th September to close a brilliant 2022 season. 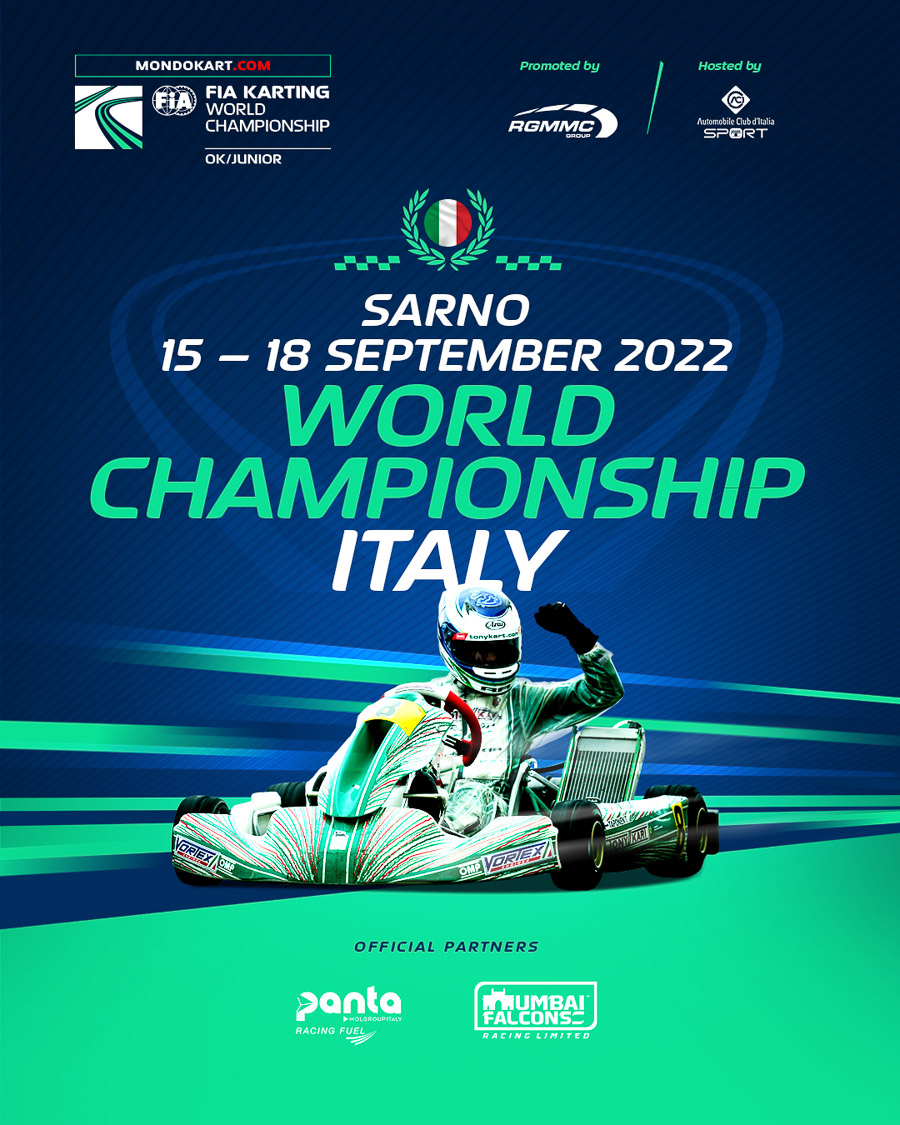 A sign of a return to normality after two seasons impacted by the pandemic, the attendance of this World Championship confirms that interest in the OK and OK-Junior categories is burgeoning in the international karting landscape. The attractiveness of the Circuito Internazionale Napoli has not waned over time and the current version of the Sarno track, 1550 m long, is very challenging.

Under the guidance of FIA Karting Championships Promoter RGMMC and supported by FIA Karting partners Mondokart and Mumbai Falcons Racing, the format of a single world event, accessible to all, has proven its value over the years.

The positive evolution is buoyed by the presence of new countries from all five continents in the competition. The total of 49 nations competing in this World Championship sets a record at this level.

The 2021 OK World Champion, Tuukka Taponen (FIN), will try to double his score this year in Sarno. But the competition will be strong with serious contenders like Kean Nakamura-Berta (JPN), who was crowned European Champion, and Jamaican Alex Powell, runner-up in his first year in the category. Among the other talented rookies, France’s Enzo Deligny, the Latvian Tomass Stolcermanis, Maksim Orlov and the Belgian Ean Eyckmans will challenge strongly. The potential of the young drivers David Walther (DNK), Zachary David (PHL), Freddie Slater (GBR), James Egozi (USA) should not be overlooked. With more experienced drivers like the Britons Joe Turney and Arvid Lindblad, the Italians Luigi Coluccio, Cristian Bertuca, Nicolo Cuman, Paolo Ippolito, Finland’s Juho Valtanen, and the Brazilians Gabriel Gomez, Olin Gali, Matheus Ferreira, the conquest of the world title promises to be competitive.

OK-Junior, a real incubator of talent

The succession of the 2021 OK-Junior World Champion is open as Kean Nakamura-Berta (JPN) is now competing in the higher category. Third last year and European Champion this year, Anatholy Khavalkin represents the rising generation along with the Polish driver Jan Przyrowski and the Britain’s Nathaniel Tye. The list of serious contenders remains long in the 12-14 age group. However, Dmitry Matveev, Enzo Tarnvanichkul (ESP), Guillaume Bouzar (LUX), Zac Drummond (GBR), Rene’ Lammers (NLD), Lewis Wherrell (GBR) and Jules Caranta (FRA) should be mentioned for their presence in the European top 10. The recent winner of the FIA Karting Academy Trophy, Arthur Dorison (FRA) will meet the 2021 winner Maciej Gladysz (POL).

Provisional programme for the Sarno event

The Sarno event can be followed on the official FIA Karting Championship app for mobile devices and on the website www.fiakarting.com.