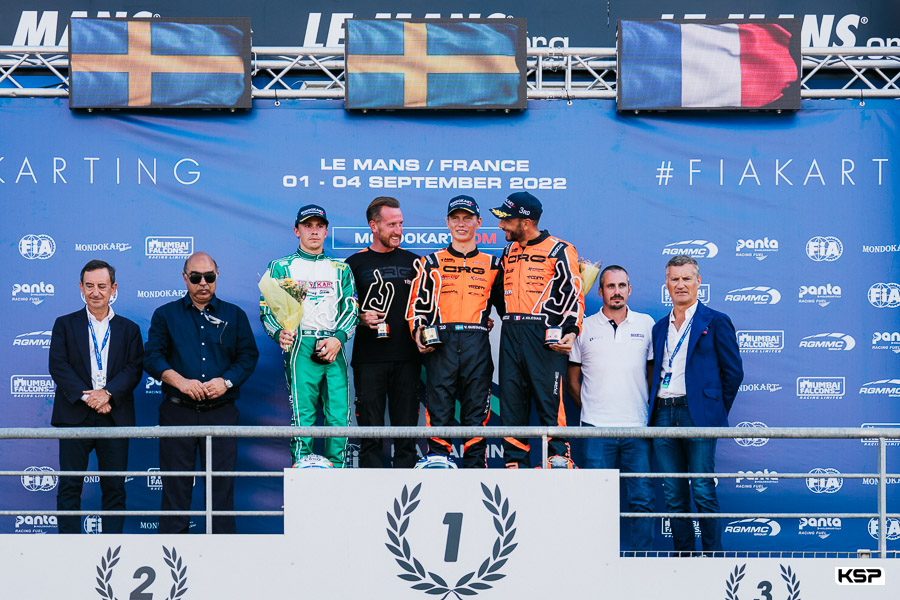 Simo Puhakka (Tony Kart/Vortex) took pole position on the grid for the final race of the FIA Karting World Championship at Le Mans, alongside Viktor Gustafsson (CRG/TM), ahead of Pedro Hiltbrand (Birel ART/TM) and Jérémy Iglesias (CRG/TM). The track had regained a lot of grip after the rain of the day before and the weather remained fine despite some clouds with 25°.

Puhakka started perfectly at lights out, but Gustafsson finished the first lap in the lead, while Iglesias was very incisive in 3rd place. Emilien Denner (Sodi/TM) was soon back in 4th. Riccardo Longhi (Birel ART/TM) had problems and started from 35th place. Puhakka followed Gustafsson, Noah Milell moved up to 4th, Senna van Walstijn (Sodi/TM) moved up to 5th ahead of Denner and Stan Pex (KR/TM) who moved up seven positions. On lap 6, Iglesias attacked Puhakka in the banking followed by Milell. Iglesias was the fastest to get back to Gustafsson, but Milell was right on his tail. The leader was threatened by a three-tenths deficit, but showed with a better lap that he had the resources.

At the halfway point, Gustafsson was 0.367″ ahead of his team-mate Iglesias, followed by Milell at 0.268″. Puhakka followed in 4th place, less than four tenths behind. The 22 laps of the race would put the tyres to the test. Iglesias started an attack at the end of the 16th lap, Milell passed him shortly afterwards while Iglesias repelled an attack from Puhakka. The two Swedes fought an intense and uncertain battle for the title. Gustafsson was very strong in the last laps and won by 0.178″ against Milell to become the 2022 KZ World Champion ahead of the defending champion. Iglesias took a superb 3rd place 7 tenths ahead of Puhakka who had been placed as favourite at the start. Van Walstijn secured a top five ahead of his team mate Denner. Stan Pex finished 7th, Lorenzo Travisanutto (Parolin/TM) 8th, Tuukka Taponen (Tony Kart/Vortex) 9th and Adrien Renaudin (Tony Kart/Vortex) 10th. Anthony Abbasse (Sodi/TM) concluded his annual competition in 13th place.