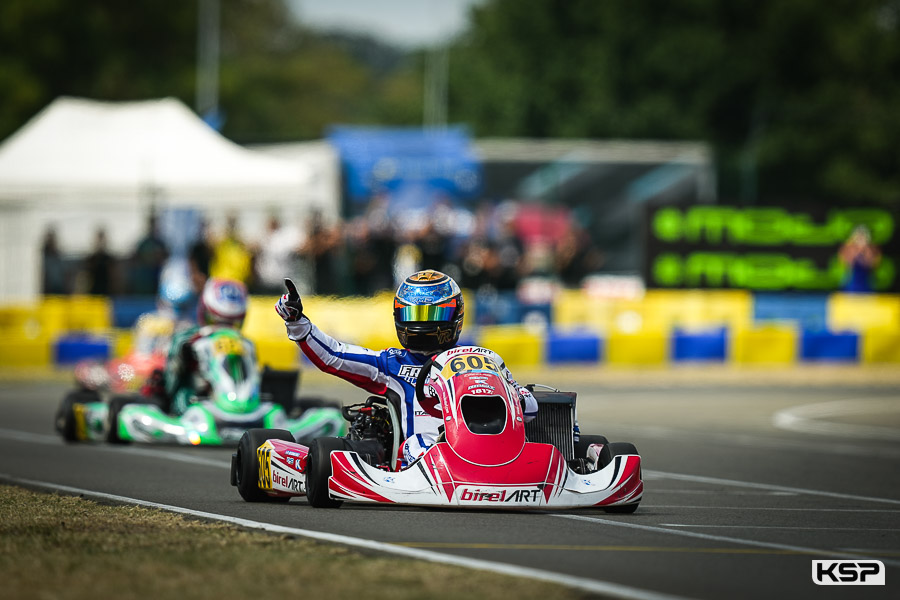 The air temperature was 31° in Le Mans for the DD2 Final of the RMCIT with Antoine Barbaroux (Sodi/Rotax) the favourite after his superb run at the top of the class. The French driver was only 3rd at the end of the first lap, with Maxim Dirickx (Birel ART/Rotax) leading ahead of Mathias Bjerre Jakobsen (Tony Kart/Rotax). Xen De Ruwe (Tony Kart/Rotax) started well and was soon in 3rd place ahead of Kyle Kumaran (Kosmic/Rotax) and Barbaroux in 5th. Bjerre Jakobsen had taken the lead against Dirickx. Paolo Besancenez (Birel ART/Rotax) was back to 6th and Nicolas Picot (Tony Kart/Rotax) 8th with an incredible gain of 18 places. Kylian Guérin (EOS/Rotax) was 3rd after a 13-place gain. Barbaroux was soon back in the top three after five difficult opening laps with Besancenez in his wake. De Ruwe had to retire. The gaps were closing in the top four. Bjerre Jakobsen defended which caused the regrouping of his opponents. Barbaroux lost a few tenths in an attempt to overtake. Besancenez moved up to 2nd with four laps to go while Picot was getting closer to the top five. Barbaroux managed to take 3rd position. Besancenez was the fastest on the track in his pursuit of the leader, whom he passed at the beginning of the last lap. Besancenez moved up 11 places and took a superb victory 5 tenths ahead of Bjerre Jakobsen and Dirickx in 3rd place, while Barbaroux, who was unlucky in the race, moved from 3rd to 8th place due to a broken spoiler. Kumaran was 4th ahead of Picot 5th with 21 positions taken. There was a nice 7th place for Jorden Dolischka (DR/Rotax) with a gain of six places.

Get ready for the RMCGF 2022 : the Rotax Racing family returns to Portugal