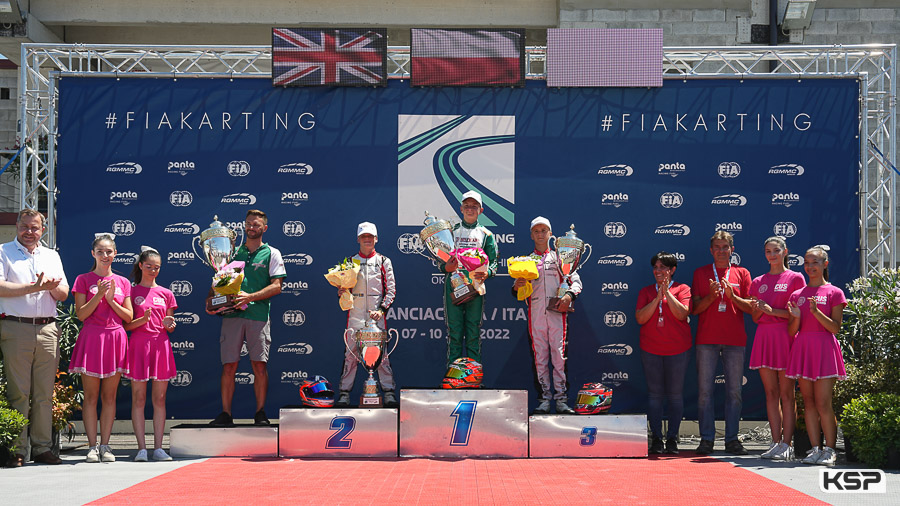 20 laps were scheduled for the last Final of the FIA Karting European Championship – OK-Junior on the Franciacorta track. The thermometer showed 30° and the weather was radiant. Anatholy Khavalkin (Parolin/TM) and Jan Przyrowski (Tony Kart/Vortex) shared the front row, while the title was decided between Khavalkin (70 points) and Nathan Tye (Sodi/TM) with 64 points and 11th on the grid.

After an eventful start, Kirill Kutskov (Birel ART/TM) took the lead on the first lap, Tye was 4th and Khavalkin 5th. On the third lap, Tye took the lead in front of Kutskov, Jimmy Helias (Tony Kart/Vortex), Khavalkin back in 4th in front of Przyrowski, and Guillaume Bouzar (Tony Kart/Vortex). On lap 5, Khavalkin was back in the lead, but Helias replaced him. Tye had fallen back to 8th. Kutskov and Tarnvanichkul had to retire after a collision. Khavalkin was still leading against Przyrowski, Bouzar, Zac Drummond (Parolin/TM) and Tye followed by Helias. Thomas Strauven (Tony Kart/Vortex) started last and was now back in 7th place (+29 pl).

Przyrowski took the lead on the 11th lap, then Bouzar was 2nd ahead of Khavalkin. His team-mate Drummond followed Khavalkin like a guardian angel. Bouzar briefly took the lead before being sent into the barriers. Drummond took the lead, then Przyrowski took over. Tye moved up to 4th and eventually attacked Khavalkin with two laps to go. Tye was then under pressure from Helias who passed him in 3rd place on the last lap. The two drivers clashed and retired. Khavalkin finished 3rd and took the European title. Przyrowski won the race ahead of Drummond. Lewis Wherell (Exprit/TM) and Strauven (+31 pl) completed the top five ahead of Marcus Saeter (Tony Kart/Vortex) who moved up 28 places. Maxens Verbrugge (KR/Iame) finished 10th (+16 pl) while Jules Caranta (Energy/TM) lost part of the benefit of his climb due to a penalty that relegated him to 14th. Half of the field did not reach the finish of this crazy Final.