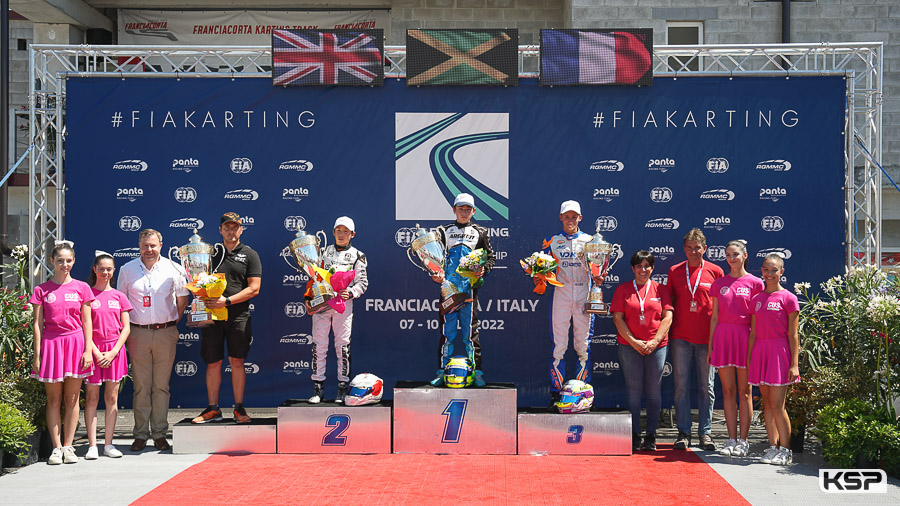 Nicolo Cuman (Exprit/TM) started from pole position for the Final of the FIA Karting European Championship – OK in Franciacorta. But all eyes were also on Kean Nakamura-Berta (KR/Iame) who was aiming for the title, 2nd with 74 points behind Joe Turney (Tony Kart/Vortex) and his 79 points who started only 20th. Enzo Deligny (Parolin/TM) was 3rd on the grid and in the championship with 55 points as was Alex Powell (KR/Iame) 9th on the grid.

Cuman and Deligny got off to a good start, but Powell was 2nd ahead of Evan Giltaure (KR/Iame) and Deligny on the first lap. Powell took 1st place while Turney fell to 34th. Giltaire moved up to 2nd, Deligny was 5th ahead of Nakamura-Berta on lap 3. Cuman dropped back, David Walther (Tony Kart/Vortex) was up to 3rd ahead of Nakamura and Deligny. Powell was more than a second ahead of his rivals on lap 5. While Nakamura was struggling with Walther, Deligny seized the opportunity to come back to 3rd. Nakamura reacted immediately, concentrating his fight for the title. The top three of the virtual ranking, Powell, Turney and Nakamura were each separated by one point.

Nakamura was working hard to catch Giltaire. He put in some very fast laps. Powell was also setting reference times at the front of the race, 1,5” ahead of Giltaire at mid-race. Nakamura had caught up with Giltaire and was looking for the least risky opening in the remaining eight laps. Nakamura reduced the pressure slightly, perhaps to let his tyres cool down. He put the gas back on and Giltaire let him pass with two laps to go. Powell took a bitter victory 2,4” ahead of Nakamura who had secured the title thanks to Giltaire’s move dictated by Dino Chiesa. Walther finished 4th and Deligny 5th. Turney was 21st and 3rd in the Championship.