Portimão: a dramatic turn of events in the final Junior heats 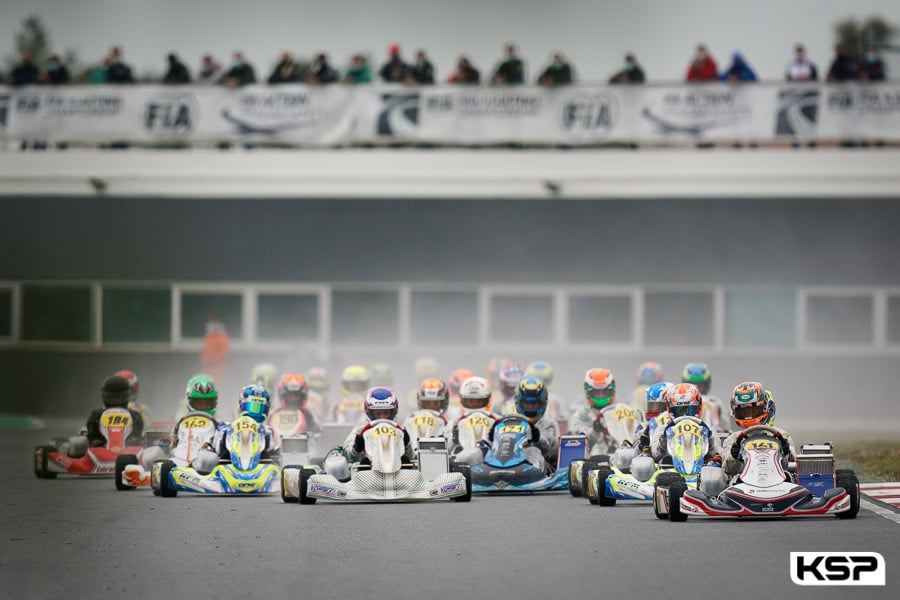 Portimão woke up to rain on Sunday morning. The last Qualifying Heats of the Junior World Championship would therefore be held on a wet or dry track, in any case with rain tyres. For the rest, the Final, the weather remains uncertain.

Christian Ho (KR/Iame) was already 1.5″ ahead of his opponents on the first lap of the E-F heat. Romain Andriolo (Sodi/TM) went off the track and retired on the third lap. Ho was leading a lively race and took the victory with a 6,8” advantage on Freddie Slater (Kosmic/Vortex). Tuukka Taponen (Tony Kart/Vortex) and Irfan Coskun (Kosmic/Vortex) were penalised (spoiler) and Alfio Spina (Tony Kart/Vortex) took 3rd place ahead of Dion Gowda (Kosmic/Vortex). Sonny Smith (Exprit/Vortex) was 8th (+15 pl.) and Emmo Fittipaldi (KR/Iame) 9th (+17 pl.). Antonio Leite (KR/Iame) finished 14th, while Romain Andriolo (Sodi/TM) had to give up.

Maxens Verbrugge (KR/Iame) encountered an astonishing problem in the formation lap of the C-D heat, as he was seen to enter the pits in reverse. He started very late and then retired, very angry. Tymoteusz Kucharczyk (RK/TM) broke away from the pack on the first lap. Macéo Capietto (Kosmic/Vortex) took 2nd place 1,3″ behind the leader, passing Ean Eyckmans (Kosmic/Vortex). Arthur Poulain (Sodi/Iame) went off and retired. Kucharczyk slowed down considerably on the 4th lap, apparently suffering from a technical problem, and Capietto found himself in the lead. The Frenchman took the victory 2,6″ ahead of Markus Luzio (KR/Iame). Bruno Del Pino (Tony Kart/Vortex) passed Eyckmans for 3rd place in the last lap, followed by Matteo De Palo (Tony Kart/Vortex). Augustin Bernier (KR/Iame) finished 11th, and Guillaume Bouzar (Parolin/TM) 19th.

The A-B heat took place under a deluge with reduced visibility. Alexander Gubenko (Kosmic/Vortex) and Brando Badoer (KR/Iame) made contact with each other and crashed out of the lead on the first lap. Alex Powell (KR/Iame) was leading against Nikola Tsolov (KR/Iame). Harry Burgoyne (KR/Iame) was in front of Ugo Ugochukwu (KR/Iame). Evan Giltaire (Sodi/TM) had dropped back to 7th position. Ariel Elkin (KR/Iame) went off the track trying to attack the Frenchman and fell to 12th position. Connor Zilisch (Tony Kart/Vortex) dropped out when he had come back to 4th. Running 6th, Giltaire made a mistake and joined the drop list with two laps to go. Powell spun out on the last lap and Tsolov took the victory in front of Burgoyne and Ugochukwu. Arthur Rogeon (Exprit/Vortex) finished wisely in 6th position.