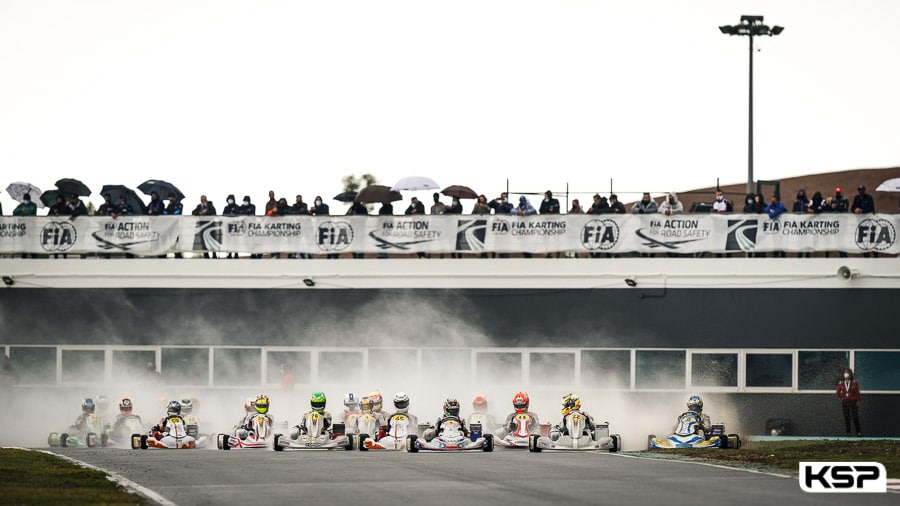 The last two Qualifying Heats of the OK World Championship were held on a wet track in Portimao on Sunday morning, even though the rain had stopped falling. There was no lack of twists and turns in these conditions.

Several drivers were at fault in the formation lap of the A-D heat. Pedro Hiltbrand (Tony Kart/Vortex) emerged at the front of the first lap in front of Matheus Morgatto (Birel ART/TM) and Luigi Coluccio (Kosmic/Vortex). Alexander Hartvig (Tony Kart/TM) and Danny Keirle (KR/Iame) were fighting in the top five. Hiltbrand broke away, whereas Coluccio challenged Morgatto for 2nd place. Hugo Besson (KR/Iame) drove a superb race and climbed up to 7th place. Mattias Salonen (KR/Iame) and Keirle attacked Morgatto. Oliver Gray (Birel ART/TM) dropped out after a spin. Morgatto was also made a mistake and crashed at the back of the pack. Hiltbrand won the race 1,4″ ahead of Coluccio, with Salonen in 3rd, Keirle in 4th and Dilano vant’Hoff (Exprit/TM) in 5th place with a gain of 16 places. Besson finished 10th with a penalty and Florian-Rousseau Ricci (KR/Iame) 22nd.

The B-C heat gathered several seeds on a still very wet track. Taylor Barnard (KR/Iame) was pushed off the track and crashed to 11th behind Lorenzo Travisanutto (Parolin/TM). Callum Bradshaw (Tony Kart/Vortex) took the lead ahead of Andrea Kimi Antonelli (KR/Iame) and Nico Hantke (Tony Kart/Vortex). Marcus Amand (KR/Iame) started the last chance climb. In 4th position, Nikita Bedrin (Tony Kart/Vortex) had moved up six places, whereas Hantke had moved up to 2nd place ahead of Antonelli. The gaps were increasing at the front of the race. Bradshaw took the victory after a good show with an advantage of 1,6″ on Hantke. Antonelli was in 3rd position, Bedrin remained 4th. Before his penalty, Charlie Wurz (Exprit/Vortex) was in front of Barnard who finished 5th and remained leader of the classification. Travisanutto finished 7th, Lola Lovinfosse (Tony Kart/Vortex) 14th (+7 pl.), but Amand didn’t reach the finish line.

Portimão: a dramatic turn of events in the final Junior heats