The rain had stopped on Portimao for the start of the Final of the OK World Championship. The sun was even showing signs of shining between the clouds, but the track was still very wet with a few puddles in places. Taylor Barnard (KR/Iame) and Callum Bradshaw (Tony Kart/Vortex) were on the front row ahead of Lorenzo Travisanutto (Parolin/TM) and Pedro Hiltbrand (Tony Kart/Vortex). Qualified 36th, Florian Rousseau-Ricci (KR/Iame) was the only Frenchman in the race.

Bradshaw took the best start from the outside, followed by his team-mate Hiltbrand, but Barnard was still 3rd ahead of Porter and Keirle. Travisanutto dropped to 23rd place and Andrea Kimi Antonelli (KR/Iame) was no longer on the track. The incident after the start had also eliminated Matheus Morgatto (Birel ART/TM) and Dilano Vant’Hoff (Exprit/TM) among others. The race was interrupted with a red flag and the karts went back to the parc ferme.

The Final was restarted 25 minutes later in the original order. Some damaged karts had been repaired, but Antonelli and Maya Weug (Birel ART/TM) were missing from the second start. This time everything went well. Taylor kept the advantage over Bradshaw and the duel began immediately. Hiltbrand was 3rd in front of Morgan Porter (KR/Iame) and Travisanutto. James Wharton (Parolin/TM) fell to the back of the pack.

Bradshaw took over the lead and quickly set some exceptional lap times. Barnard found himself under pressure from Hiltbrand. Spins and crashes followed each other. Porter and Joe Turney (Tony Kart/Vortex) attacked Travisanutto to take 4th and 5th place, Markus Kajak (Tony Kart/Vortex) followed them shortly after. The rain came back before mid-race, Hiltbrand was 2nd 6″ behind the leader and Turney followed him in 3rd position at 1,2″.

Kajak crashed on lap 13 and lost his top five hopes. Hiltbrand was overtaken by Turney after a small problem that destroyed his gap in 2nd so Turney took 2nd place on the 15th of the 20 laps. Rafael Camara (Exprit/TM) was also dropped. The finish line approached without any suspense in this long race, which didn’t take away anything from the 24 drivers still on the track.

Bradshaw took the victory with the fastest lap, 8,7″ ahead of Turney, himself 2″ ahead of Hiltbrand for a triple podium for the Tony Kart Racing Team. Porter took a superb 4th place in front of Barnard with Travisanutto 6th. Rasmus Joutsimies (CRG/Iame) moved up 19 places to 8th and Ruben Moya (CRG/Iame) regained 22 positions to enter the top 10. Wharton had regained 12 places in 20th position. 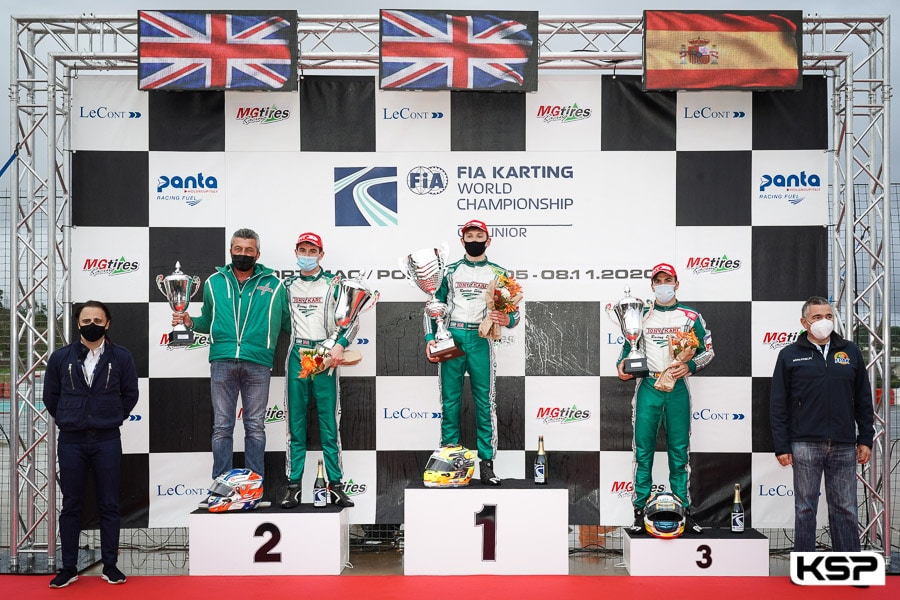