New winners at the second DKM event in Kerpen 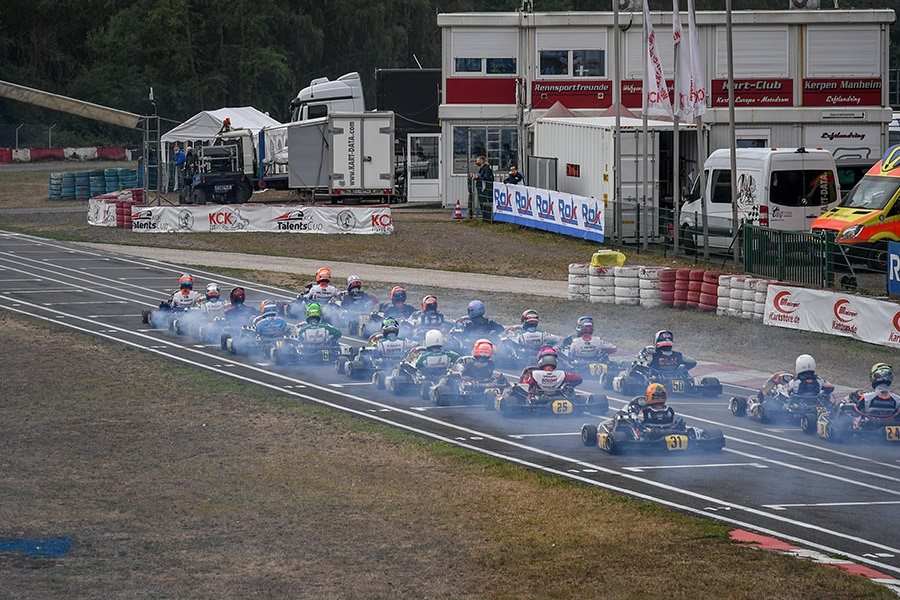 Originally, the German Kart Championship with its five grade series was going to travel to Mülsen for its second event. But a short-term cancelation of the race caused a change in the racing calendar. The Kart-Club Kerpen e.V. offered to host the second event after the successful season kick-off as well. 108 participants followed the invitation and started on the 1.107m long track in Kerpen.

After the red-hot battle at the kick-off, the weather was a lot better this time. The ranked races three and four took place with pleasant temperatures. In the classes, the power balances changed some. Juho Valtanen, Luca Griggs (both DKM), Kris Haanen (DJKM), Stan Pex (DSKM), Tim Tröger (DSKC) as well as Sebastian Kraft and Joel Mesch (both DEKM) finished the races as winners. 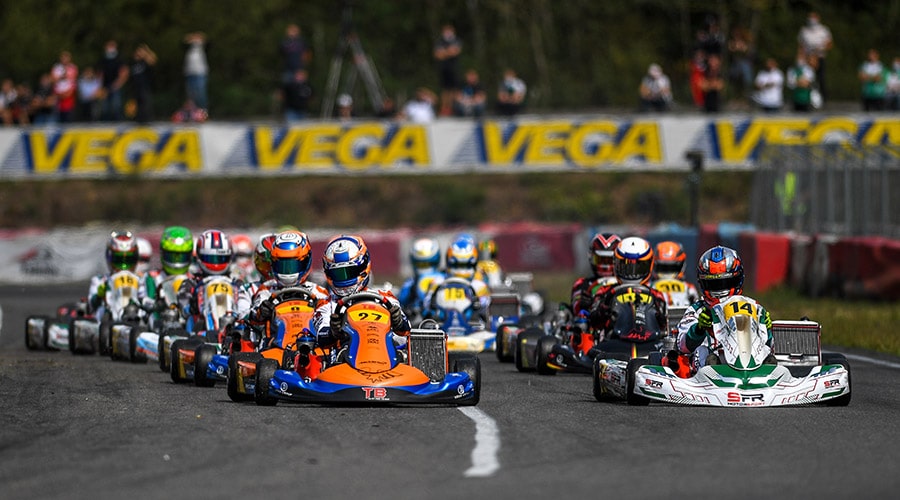 DKM: Victories went to Juho Valtanen and Luca Griggs
Until the second final race, Juho Valtanen (TB Racing Team) dominated the events of the DKM. With a best time during qualifying, he achieved a great start into the second racing weekend and tied in with this due to two heat victories and a success at the first final race. He already showed that he was a bit concerned about the second race during his winner’s interview: “This race was pretty easy. I wanted to spare my tires towards the end of the race. I already started with four new ones, which could be a disadvantage for the second race.” Behind the fast Finn, his team mate Moritz Wiskirchen (TB Racing Team) showed a great catching-up race and caused a double victory for the team by coming in second. Luca Griggs (SFR Motorsport) completed the winners‘ podium on third place. Fourth and fifth winners Vincent Andronaco (Millenium Racing Team) and Ben Dörr (TB Racing Team) received trophies as well.

During the second final race, winner Valtanen had no chance to keep up with the pace at the front of the field. His team mate Ben Dörr took the lead and led the field for a long time. During the second half of the race, Griggs was the fastest driver of the field again and won. Behind him, several dramatic events happened. Dörr and Daniel Gregor (Junior Team75) on third position both had to drop out of the race shortly before the end. New second winner was Niels Tröger (Mach1 Motorsport) in front of Valtanen, Sandro Holzem (SFR Motorsport) and Joel Mesch (TB Racing Team). In his interview, winner Griggs was in a great mood after his success: “Especially in the beginning, this was an interesting race. There was a lot of sand on the track, but I dealt with it really well and spared my tires. Towards the end I was then able to fully attack and take the lead.” 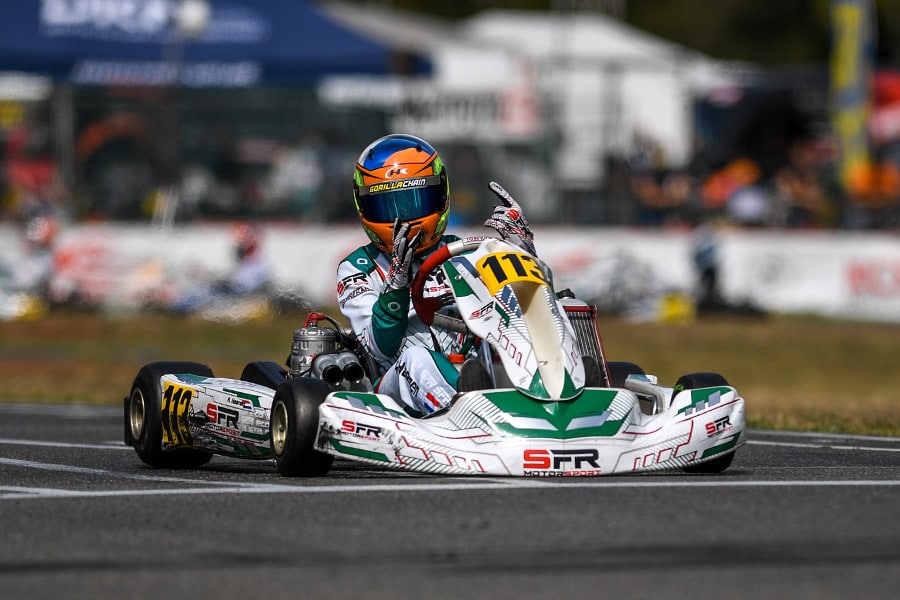 DJKM: Kris Haanen achieves double victory again
With Dutchman Nathan Ottink (SFR Motorsport), a new face led the Junior Championship after qualifying. With two victories, Championship leader Kris Haanen (SFR Motorsport) raced back to the front of the field during the heats though and led it into the first final race on Sunday. The race turned into a real thriller throughout the 18 laps. With Haanen, Maxim Rehm (Rehm Racing) and Herolind Nuredini (KSM Official Racing Team), there were three drivers who temporarily led the championship. The juniors were closely together in the field of pursuers as well. In the end, Nuredini came in first but fell back to ninth position due to a subsequent spoiler penalty. New winner was Haanen, in front of Rehm and Kiano Blum (TB Racing Team). Ottink and Mathias Bjerre Jakobsen (RS Competition) completed the top five.

The starting phase of the second final race was again dominated by lots of changes in positions. Shortly after the start, Blum took the lead and seemed to drive away from the field, but his pursuers stayed close and Jakobsen took the lead. The Dane wasn’t able to strengthen his position though. In the end, Haanen won again. He was already back at the front before the middle of the race and kept his position until the end. Nuredini fought his way forward again to second position. Third place went to Tom Braeken (SP Motorsport) followed by Jakobsen and Marius Kristiansen (HK Motorsport). Double winner Kris Haanen is now leading the championship with a considerable advance after four consecutive victories: „After my double victory three weeks ago I was very confident about being able to win again today. During the first race I lacked a little speed, but everything went perfectly during the second race and I won with a clear advance. I’d really like to thank my entire team.“ 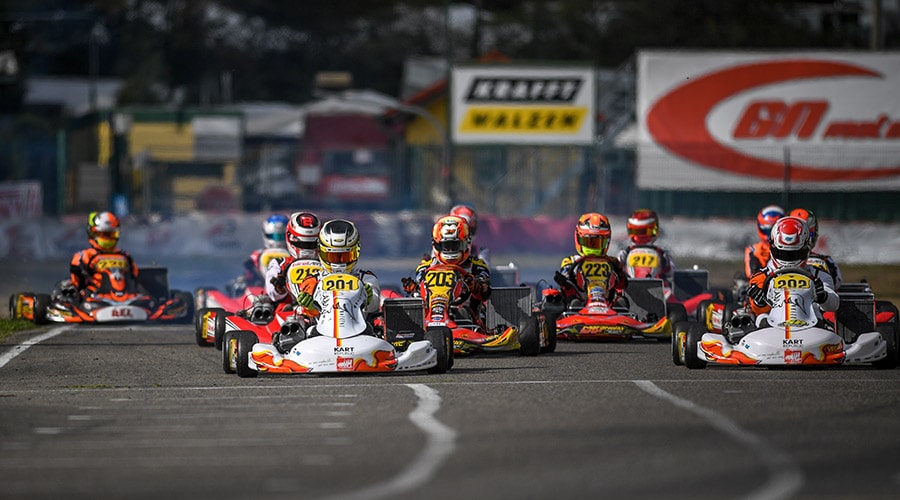 DSKM: Double victory for champion Stan Pex
At the German Shifterkart Championship, the quality of the field of drivers was remarkable again. Four reigning and former champions started and showed kart racing at its highest level. Jorrit Pex (SP Motorsport) finished qualifying as the pole setter, but lost his place to Fabian Federer (SRP Racing Team) during the heats. Both of them belonged to the front drivers of the first final race as well but didn’t win. Reigning champion Stan Pex (SP Motorsport) did. With a perfect start he took the lead and didn’t give it up until the end of the race. His brother Jorrit caused a Pex-double success. Even though he had temporarily fallen back to fifth place, he fought his way forward again and came in second. David Liwinski (BirelART Racing KSW) showed a strong race and celebrated his first place on the DSKM-podium on third place. Fourth and fifth places went to the SRP Racing Team-duo Federer and David Trefilov.

Just like in the first race, Stan Pex was unstoppable during the second. He led the field from the start and rejoiced about his double victory at the finish line: “We had a good speed and therefore achieved the double victory. Being the first one to drive on the track isn’t always easy, because it’s still slippery and doesn’t have a lot of grip.” His brother Jorrit took the role of pursuer after a falling-out by Federer. He was put under pressure by Alexander Schmitz (BirelART Racing KSW) though. The 2015 champion saw his chance at second place but wasn’t able to attack anymore. Towards the end, Guust Specken and Jean Luyet (both CRG Holland) also came close. While Specken fell out of the top five drivers due to a spoiler penalty, Trefilov took his position.

DSKC: Tim Tröger triumphs due to Mach1-triple success
Overall leader Julian Müller (Mach1 Motorsport) tied in with his performance of the last racing weekend during qualifying of the DSKC and drove the best time. During the heats, he had to give up his lead to his team mate Tim Tröger though. With a victory and a fourth place, he took the lead of the interim rankings. Coen Doorn from the Netherlands followed on second place. The duo also took the first starting position for the two respective pre-finals in which both of them drove away from their opponents and won.

The final race began with a thrilling starting phase. The first five drivers were really close together and fought fair fights. Doorn initially led the field. From behind, Tröger fought his way forward again after a bad start. The Saxon took the lead 13 laps before the end of the race and extended it throughout the rest of the race. Despite all this, Julian Müller and Simon Connor Primm (Valier Motorsport) raced through the field after fallings-out during the pre-final. At the finish line, they came in second and third. Primm lost his place on the podium due to a spoiler penalty though. Paul-Jeremy Voegeding (Mach1 Motorsport) took it and thereby made a triple success possible for his team. “Our drivers showed a really strong race and I’m very proud to see three of them on the podium now. Everyone is highly motivated and fully focused on being successful”, said team leader Martin Hetschel contently in the winner’s interview. Doorn came in fourth in front of Luca Walter, who drove forward to fifth place from the last starting row.

After the double events in Kerpen, the DKM is now going to take a break of four weeks. Then, the highest German kart racing series and its grade series are going to travel to Wackersdorf and already start the second half of the season at the Prokart Raceland.