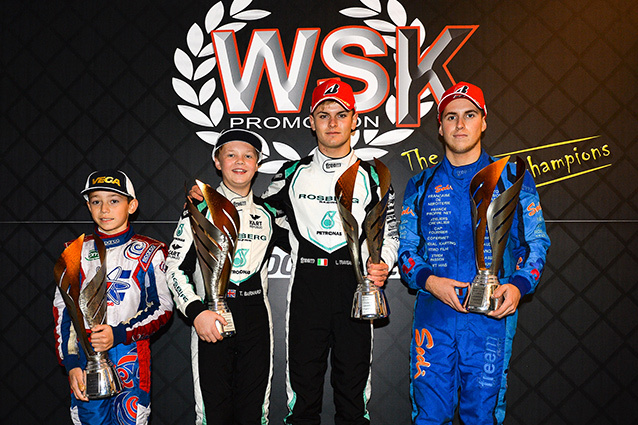 Four promising Motorsport drivers on the podium of WSK Final Cup.
Four young promises got on the podium at the Adria Karting Raceway at the end of the 13th International karting season organized by WSK Promotion. These drivers came up on top of the charts at the end of the four rounds making up the WSK Final Cup. In the three rounds held in Lonato (BS), Castelletto di Branduzzo (PV) and Adria (RO) in the time frame of one month, adaptation skills have been highlighted by the Autumn weather on changing conditions that ranged from dry to wet. The average presence of the series counted 230 drivers on track. In the poto above, from the left, the winners Alex Powell (60 Mini), Taylor Barnard (OK Junior), Lorenzo Travisanutto (OK) and Adrien Renaudin (KZ2).

Lorenzo Travisanutto is the king of OK.
Lorenzo Travisanutto (KR-Parilla-Bridgestone) had a difficult but happy season finale, as he won OK despite being hit by some bad luck. The Italian got the full haul in Lonato, but then he had the upper hand only in heats and Prefinals in the rounds of Castelletto and Adria, where he had to stop early in both Finals, as happened yesterday due to the failure of the drive chain. A total of 203 points earned Travisanutto the classification lead at the end. The title hopes of the Dane Nicklas Nielsen (Praga-Parilla) did not get concrete, as he was also quite unlucky in the Final in Adria. Dexter Patterson (KR-Parilla) won in Castelletto but his hopes did not get converted in the title either. The two closed respectively fourth and fifth and were pipped by the Dutch Kas Haverkort (CRG-TM) and by the Swiss Leandro Anderruti (KR-Parilla). These two ended second and third at 182 and 157 points, after getting on the podium in Adria in the order behind race winner Andrea Rosso (Parolin-TM).

Renaudin taking the win in KZ2.
Class KZ2 has been dominated by the French Adrien Renaudin (SodiKart-TM-Bridgestone), who ruled throughout heats, Prefinals and Finals in the two rounds of Castelletto and Adria, after his teammate from Holland Bas Lammers kicked off to a great start in Lonato. Renaudin secured the win of WSK Final Cup with 243 points, leading fellow-countryman Emilien Denner (KalìKart-TM), who scored a total of 145 points. The Dutch driver Dylan Davies (DR-Modena) was second in Adria behind Renaudin and this allowed him to climb up to P3 of the final classification at 121 points. Lammers followed him, while the French Jean Luyet, also on the podium in Adria, closed his campaign in fifth position.

Taylor Barnard victorious in OK Junior.
The WSK Final Cup crowned the British Taylor Barnard (KR-Parilla-Vega) as the winner of OKJ. Three were the main contenders to the final win in this category. The fair and square victory of Barnard in Lonato, was followed by the win of the Finn Armand Marcus (KR-Parilla) in Castelletto, before Gabriele Minì (Parolin-TM) had the upper hand in the closer of Adria. The constancy of results rewarded Barnard’s campaign and he ended first at 235 points, leading Minì at 194. The third place went to the Russian Kirill Smal (Tony Kart-Vortex), who closed behind Minì in Adria and totalled 172 points. Marcus (140 points) had to settle for P4 and was followed by the promising Andrea Antonelli (KR-Parilla) at 120.

Alex Powell hitting the big target in 60 Mini.
A surprising result was scored by Alex Powell (Energy-TM-Vega, in the photo), who came all the way from Jamaica to Europe to dominate 60 Mini. After the early convincing win in Lonato, Powell confirmed to be on top of the category, despite being challenged by the Belgian Ean Eyckmans (Parolin-TM), who managed to win the Final in Castelletto. The Swede Joel Bergstrom (Parolin-TM) put in a bold performance in Adria, recovering all the way up to the victory in the Final from the problems of qualifying. The final classification is led by Powell, who reached 239 points thanks to the P3 in Adria, while Eyckmans totalled 197 points. The third place went to Bergstrom, who scored 175 points and pipped Brando Badoer. The latter held on to the fourth place and led the Brit Coskun Irfan (both on Parolin-TM): this result could have been better without the tough luck of the closing lap in Adria though.