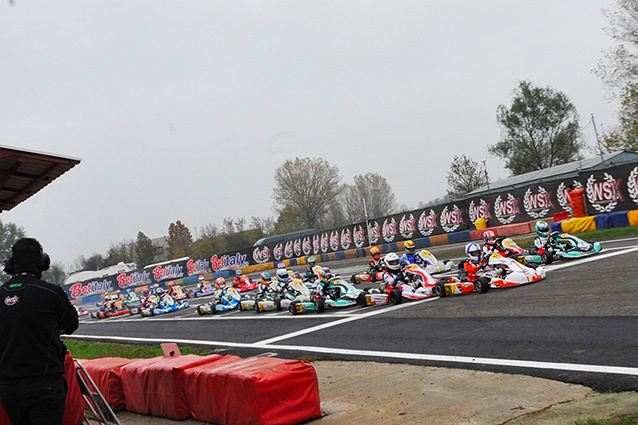 Tactics are being defined ahead of the final charge to the WSK Final Cup.
The attention switched now to classifications eying the closing round that will get the paddock of the Adria Karting Raceway all set up for the International Karting Series organized by WSK Promotion since the middle of next week. Back from Castelletto di Branduzzo (Pavia, Italy), that has staged the second of the three scheduled rounds, drivers that aimed at the victory had to change their plans. In 60 Mini, OK Junior, OK and KZ2 the situation is quite level in the classification: the results on the podium at the circuit 7 Laghi have been quite different from those of Lonato at the end of October. Forecasts on the next race are quite uncertain in terms of points awarded at the end of heats, Prefinals and Finals in Adria (Rovigo, Italy).

Alex Powell still leading 60 Mini.
The revelation of 60 Mini is undoubtedly Alex Powell (Energy-TM-Vega), who is leading the classification at 169 points. Two wins in Prefinal and one in the Final, a first and third place in qualifying are the haul of the Jamaican, but he is not certain of the final victory yet. The Italian Brando Badoer (Parolin-TM) challenged him in the first round, but in Castelletto Powell had to face the challenge of another strong rival like Ean Eyckmans (Parolin-TM): the Belgian won the hard-fought Final, stands at 137 points and is all set to be the main contender in Adria. Badoer has been quite unlucky at the 7 Laghi. After dominating heats he slipped down to the fourth place at 110 points, that is 6 points short of the British driver Coskun Irfan (Parolin-TM). The Swede Joel Bergstrom (Parolin-TM) is fifth at 55 points. The high number of points still up for grabs, 132, keeps every result still possible though.

Taylor Barnard leads OKJ by a small margin.
In Lonato, OKJ was won by the British driver Taylor Barnard, while the French Marcus Amand (both on KR-Parilla-Vega) had the upper hand in Castelletto. The two are virtually equal on points (two wins in Prefinal and one each in the Final: Barnard is leading at 143, but Amand follows only 3 points short. Behind them, the Russian Kirill Smal (Tony Kart-Vortex) is third at 92 points, Gabriele Minì (Parolin-TM) is fourth at 63, both drivers are strong contenders as they already proved they can win. The challenge to the last meter announced in Adria will include also the Italian Andrea Kimi Antonelli (KR-Parilla), who is currently fifth at 59 points.

Renaudin gets the lead of KZ2.
The French Adrien Renaudin (SodiKart-TM-Bridgestone) got the full haul in Castelletto. After dominating the heats, Prefinal and Final he installed himself on top of the KZ2 classification at 111 points. His fellow countryman Emilien Denner (KalìKart-TM) is second 3 points short of the lead after losing the battle in the closing laps of the Final at the 7 Laghi. The Dutch driver Bas Lammers (Sodi Kart-TM), absent in Castelletto, slipped down to P3 at 90 points, but still leads his fellow countryman Dylan Davies (DR-Modena) and Axel Bengtsson (Kosmic-Vortex), that are fourth equal on points at 50.

Travisanutto retains the lead of OK.
Lorenzo Travisanutto (KR-Parilla-Bridgestone) has been quite unlucky in the Final in Castelletto and had to stop. The Italian kept the lead of the classification anyway at 141 points, as he claimed two wins in qualifying heats, two in the Prefinal and one in the Final. The Scottish driver Dexter Patterson (KR-Parilla) closed in and his deserved success at the 7 Laghi circuit made him jump up to P2 at 109 points. A stop in the Final slowed down Kas Haverkort (CRG-TM) in the Final. The Dutch driver hauled only a second place in the Prefinal, which earned him P3 at 102 points. The Dane Nicklas Nielsen (Praga-Vortex) won Prefinal B and recovered up to P4 at 97 points. He is still among the favourites to the victory in Adria, after getting close to it last Sunday. The Swiss Leandro Anderruti (KR-Parilla) had a good progression getting on the podium in Castelletto and being fifth in the classification at 76 points.

Final races at the WSK Final Cup in Castelletto