Fuoco leads to the end 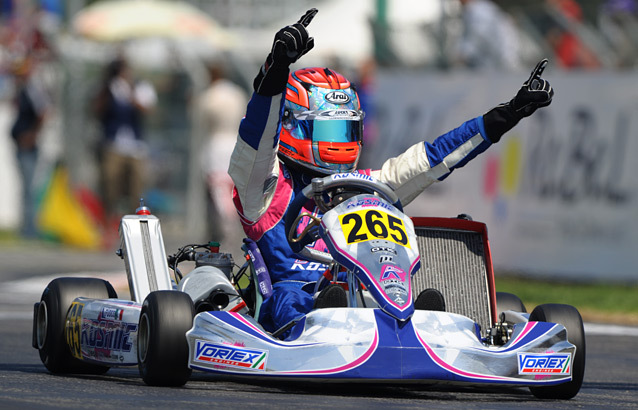 The favorite, Antonio Fuoco (Kosmic / Vortex) did not miss out at the start of the KF2 final, closely followed on the first lap by Flavio Camponeschi (Tony Kart / Vortex), Charles Leclerc (ART GP / Parilla) and Tom Joyner (LH / BMB ). The gap had already been closed by the following Damiano Fioravanti (Tony Kart / Vortex), then Benjamin Barnicoat (ART GP / Parilla), Andrew Tang (Kosmic / TM) and Sam Snell (Energy / Parilla). Fuoco took off, he was the fastest, while Leclerc began to threaten Camponeschi. Max Verstappen (Intrepid / TM) was strong from his 27th place on the grid, and on lap 5, he was already 14th.

Barnicoat got the better of Fioravanti, Marco Maestranzi (PCR / Parilla) successively passed Snell and Tang for seventh place. Fuoco continued his solitary path at the front, setting the fastest laps, and had a 2.5” lead at halfway. Camponeschi controlled Leclerc for now. Back in the top 10, Karol Basz (Birel / BMB) was on the attack to close the gap on Tang. Leclerc found an opportunity to pass Camponeschi on the 13th of 20 laps, and was now 2nd.

Fuoco dropped below 47” in lap times, and Leclerc was only able to follow his rhythm.

Verstappen was ready to move into the top 10, and needed to pass Snell, which happened on the penultimate lap. Fuoco won a major victory to conclude a perfect weekend with his new team, the Kosmic Racing Team of Olivier Maréchal. Superb second place for Charles Leclerc, after tough competition from Camponeschi, Joyner, Maestranzi fifth, Barnicoat sixth… 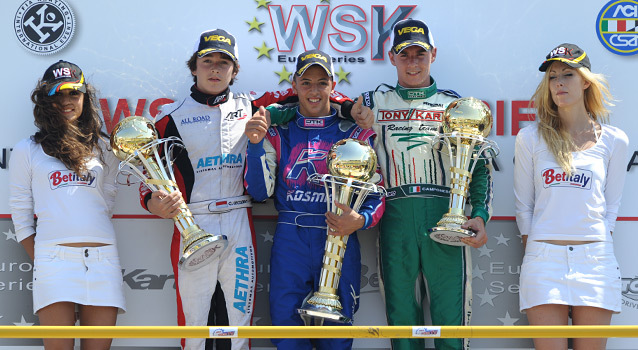