Sodi Racing Team’s brilliant season continues! In the OK-Junior World Championship, several drivers equipped with the very competitive Sodi-TM Racing package fought at the front. In the Final, the honours went to the young Hungarian Adam Hideg, who crossed the finish line in 2nd place. British driver Nathan Tye came close to placing a second Sodi chassis on the podium! 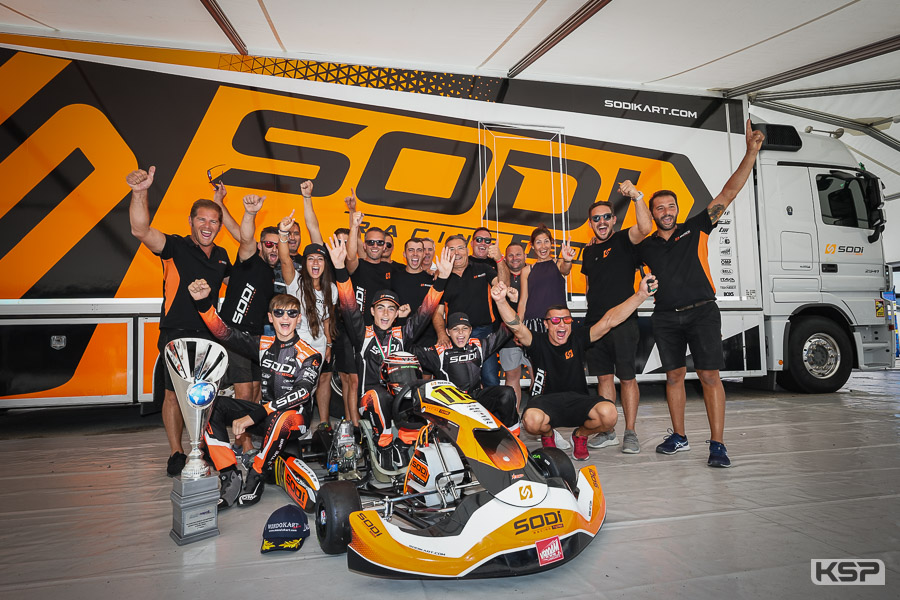 With 109 drivers starting in the OK-Junior category alone, a difficult and bumpy track, and changing weather conditions on the first day of official competition, this FIA Karting World Championship brought together many complex factors, which the Sodi Racing Team managed with method and expertise.

Frenchman Andrea Dupé, a recent addition to the team, finished in the top ten in Timed Practice and was able to fight for the lead in Sarno. However, it was Adam Hideg who proved to be the best of the Sodi Racing Team at the end of the long marathon of Qualifying Heats. A clear run allowed him to start 5th in the Final and the Hungarian quickly gained places. Winner of one heat, but also penalised in another, Nathan Tye had to start 8th, before joining his team-mate at the front.

In the fourth lap of the Final, the two Sodi-TM Racing drivers were even in 2nd and 3rd place, in the direct wake of the leader. Anything was possible at that point, given their high level of performance. The intense duels that followed led to some contact and caused Nathan to lose places. Adam, however, continued to push and finished his Final with a magnificent title of World Vice-Champion! Back in the top five, Nathan Tye was given a penalty and dropped to 10th.

“This is a great result for Sodikart and our Racing Team,” said Mansel Smith, the team manager. “It is only three years since Sodikart started to get involved in international competition in the OK-Junior category. We can be proud of the progress we have made in such a short time. After the win at the European Championship in Spain, the title at the Champions of the Future Euro Series, we are confirming our potential at every event. This is really positive for the future. We have also worked extensively with our other young drivers and their progress has been real. I think of Joel Pohjola, who was just starting in OK-Junior at this level, Andy Consani, Louis Leveau and Emiliano Ortolani. I want to thank the TM Racing factory and the engine builder GFR engines, as well as Jean-Philippe Guignet and his valuable technical team. In both KZ and OK-Junior, the 2022 FIA Karting season will continue to be full of podiums for Sodikart.”

Another international title for Sodikart

Another podium for Sodikart before the World Championship