Home Press releases F4 Academy: Barter and Peugeot in control of the races

Ideal weather conditions, a succession of overtaking manoeuvres and a lot of twists and turns on the magnificent Spa Francorchamps circuit. The Australian Barter and the Frenchman Peugeot won the first two races of the meeting. 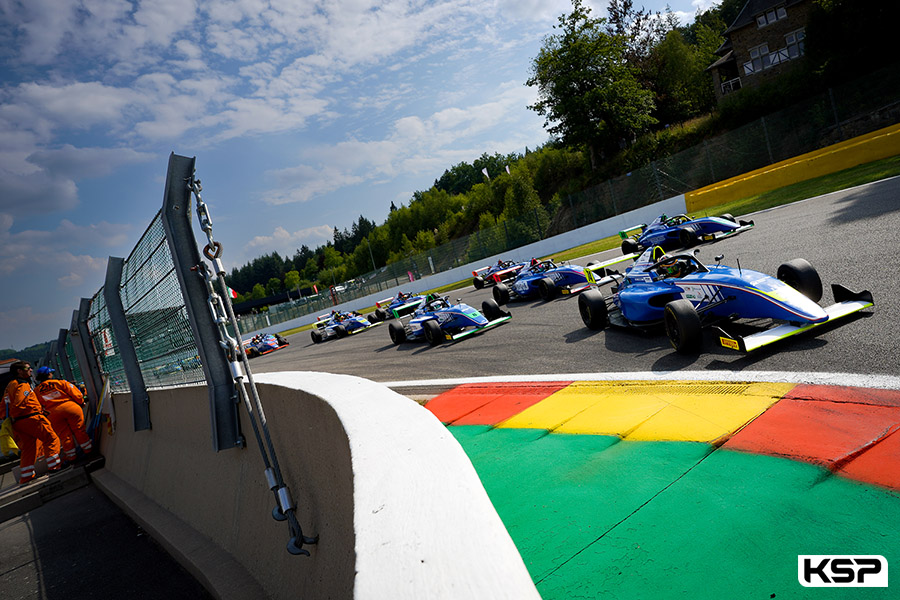 After a break of more than two months, the drivers of the French F4 Championship were longing for the lights to go out for the start of Race 1 and they had a great time on the ever-popular Belgian track. With their Pirelli tyres, the 24 Mygale single-seaters with FIA-standard Renault Turbo engines prepared by the FFSA Academy demonstrated their effectiveness and contributed to sporting fairness of the races.

The only driver to experience Spa Francorchamps in single-seater racing conditions due to his involvement in another Championship, Hugh Barter made the most of his pole position to take the lead at the Source hairpin. Next to him on the grid, Souta Arao missed his start and was overtaken by Alessandro Giusti, Jeronimo Berrio and Elliott Vayron. In the pack, contact led to a collision and a safety car period. Pierre-Alexandre Provost was eliminated in the incident, while Swiss driver Dario Cabanelas started late. Although he made a good start, Ecuadorian Mateo Villagomez was forced to retire shortly afterwards.

At the restart, Barter resumed his lead, while Louis Pelet and Enzo Peugeot took the opportunity to overtake Japanese driver Yuto Nomura who lost his 6th place. These duels for the podium and the places of honour allowed the Australian Barter to widen the gap and to run away to the solo victory. After a lot of overtaking, there was a final twist at the end of the race. Berrio was penalised 30 seconds for getting the better of Giusti under yellow flag conditions on the last lap and dropped to the bottom of the standings. Barter will not score any points in the Championship during this meeting, but Giusti did best out of the day by scoring the winner’s points. Vayron completed the podium by holding off the Japanese driver Arao.

Peugeot made a great move on Pelet and took 5th place ahead of its rival, with Nomura looking on. Romain Andriolo, Belgian Lorens Lecertua and Edgar Pierre. Enzo Geraci, who was already well up, gained two more places after a collision between German Max Reis and Panamanian Valentino Mini.

Race 2: First win for Peugeot in spite of Andriolo’s efforts

The top ten finishers from the Qualifying session were on the starting grid for Race 2 in the reverse order of the first. Enzo Peugeot got off to a perfect start and took control of the race at the expense of poleman Romain Andriolo. Andriolo was struggling to resist the pressure of his pursuers, but held on. Mateo Villagomez kept his 3rd place in front of Jeronimo Berrio, who started like a cannonball to get rid of Yuto Nomura, Elliott Vayron and Louis Pelet. The beginning of the race had claimed a victim in the form of Edgar Pierre.

Valentino Mini was again involved in a collision, this time with Luciano Morano. The retirement of both drivers forced the Race Director to bring out the safety car and the pack to regroup. Once the green flag was waved by the stewards, incredible fights followed at all levels of the field. With their lead reduced to nothing, Peugeot had to use all his strategies to contain Andriolo, who was himself worried by Villagomez. After a rather good start, Barter made his move, passed Arao and tried to get into the intense duel between Berrio, Nomura, Vayron and Giusti.

It was not until the last metres of the race that the positions were fixed. Despite a late scare, Enzo Peugeot won his very first F4 race ahead of Romain Andriolo and Jeronimo Berrio. This trio crossed the finish line within 5 tenths of each other. Villagomez was 4th and achieved his best result. Souta Arao finally settled down at the head of a pack fighting for 5th place, in which Hugh Barter, Elliott Vayron, Dario Cabanelas, recovered from his misadventure in Race 1, Alessandro Giusti, Yuto Nomura and Max Reis were present.

F4 Academy: Summer resumption as a curtain raiser to the 24 Hours of Spa