The final stages of the 11th WSK Final Cup has been spectacular and eventful in Lonato. The closing event of the season came one week after the opener of the series held last week in Sarno. On the occasion, a total of 304 drivers from 48 countries gathered at the South Garda Karting to fight for the MINI, OKJ, OK and KZ2 titles. 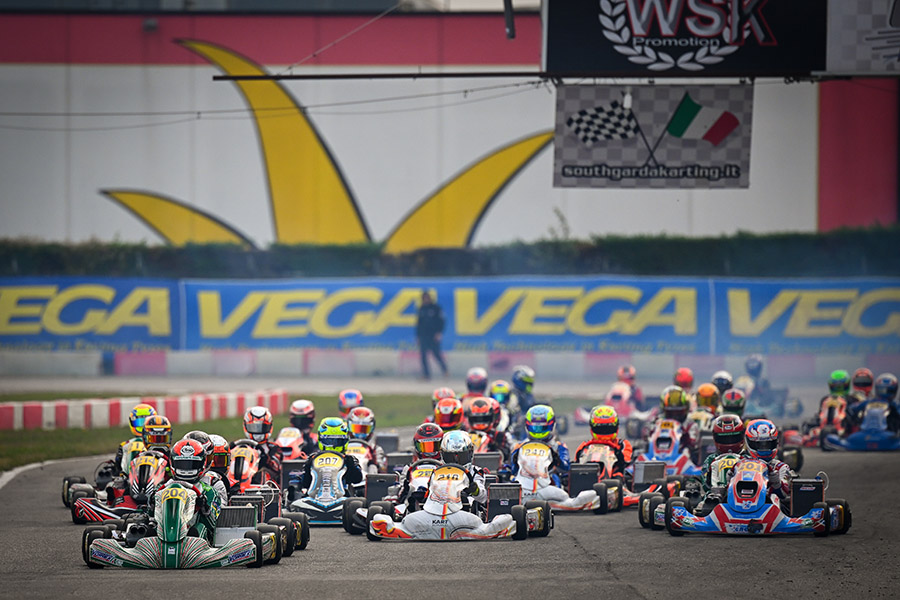 The nice weather that characterized the weekend of Lonato highlighted the speed of a lot of young emerging talents of international karting that could show their best in all the stages of the event. After the first two days that included 43 qualifying heats, which were challenging but necessary to define the finalists of this round, the program of the final stages on Sunday scheduled the usual Prefinals (that awarded useful points) and the Finals which handed the remaining crucial points for defining the WSK Final Cup 2022 Champions of each category.

THE PREFINALS
MINI. Prefinal-A ended in slow regime due to an incident. The victory went to the Dutch Dean Hoogendoorn (Alonso Kart by Kidix/Alonso-Iame-Vega), who led the Romanian Bogdan Cosma Cristofor (BabyRace Driver Academy/Parolin-Iame) and the Australian William Calleja (Parolin Motorsport/Parolin-TM Racing). The winner of the first round of Sarno, Panama’s Gianmatteo Rousseau (Alonso Kart by Kidix/Alonso-Iame), was fourth instead.
Prefinal-B was dominated by the Turkish driver Iskender Zulfikari (BabyRace Driver Academy/Parolin-Iame). He was followed by his teammate from Switzerland Riven Esteves, while the sprint for the third place was won by the Brit Noah Baglin (Ikart/KR-Iame), who proceeded the Italian Filippo Sala (Team Driver/KR-Iame).

OKJ. Prefinal-A lived on a great duel between the Belgian Thibaut Ramaekers (VDK Racing/KR-Iame-Vega) and the Colombian Salim Hanna Hernandez (Ricky Flynn/LN-Vortex). The Spanish driver Christian Costoya (Parolin Motorsport/Parolin-TM Racing) slid in the fight too. Ramaekers managed to keep the lead until the flag and was followed by Costoya and his teammate from Scotland Zac Drummond (who was second in the round of Sarno), while Hanna Hernandez was fourth.
Prefinal-B was dominated by the Italian Emanuele Olivieri (IPK Official Racing Team/IPK-TM Racing), who already won the opening race in Sarno. Olivieri led the Thai Enzo Tarnvanichkul (Tony Kart Racing Team/Tony Kart-Vortex) and the Brazilian Miguel Costa (Sauber Academy/KR-Iame).

KZ2. The Dutch driver Senna Van Walstijn (Sodikart/Sodikart-TM Racing-Vega), who already won the opener in Sarno, recovered well and won Prefinal-A leading the French Thomas Imbourg (CPB Sport/Sodikart-TM Racing). The Italian Alex Maragliano (Maranello SRP/Maranello-TM Racing) installed himself on top of the race early on but eventually lost also P3 to Tom Leuillet (Tony Kart Racing Team/Tony Kart-Vortex).
The epilogue of Prefinal-B has been quite surprising and the victory went to the Swede Noah Milell (Tony Kart Racing Team/Tony Kart-Vortex), who led Giuseppe Palomba (BirelART Racing/BirelART-TM Racing), while his teammate Cristian Bertuca, who was on top for most of the race, eventually finished third. The fourth place went to Matteo Viganò (Leclerc by Lennox/BirelART-TM Racing). Two big names like the French Emilien Denner (Sodikart/Sodikart-TM Racing) and the German Alexander Schmitz (Tony Kart-Vortex) had to retire from the race when fighting for the top instead.

THE FINALS
MINI – The Turk Zulfikari claims the victory of the final and the title.
The epilogue of MINI has been particularly exciting. Initially, the Romanian Bogdan Cosma Cristofor (BabyRace Driver Academy/Parolin-Iame-Vega) seemed to dominate the race, but his teammate from Turkey Iskender Zulfikari, eventually took the lead fending off the attacks of the Dutch Dean Hoogendoorn (Alonso Kart by Kidix/Alonso-Iame) and of the Italian Filippo Sala (Team Driver/KR-Iame) all the way to the flag. The fourth place went to the Italian Lorenzo D’Amico (IPK Official Racing Team/IPK-TM Racing), who recovered ten places. He closed his effort ahead of Vladimir Ivannikov (Gamoto/EKS-TM Racing), who recovered 8 places. Bogdan Cosma Cristofor was seventh and proceeded Augustus Toniolo (Team DriverKR-Iame).
Thanks to the victory in the Final, Iskender Zulfikari secured the title and proceeded Dean Hoogendoorn and Filippo Sala in the order.
MINI Final
Iskender Zulfikari (TUR)
Dean Hoogendoorn (NLD)
Filippo Sala (ITA)
MINI, WSK Final Cup final standings
Iskender Zulfikari (TUR) points 194
Dean Hoogendoorn (NLD) points 151
Filippo Sala (ITA) points 128.

OKJ – Tarnvanichkul wins the final, but Olivieri takes the title.
The Final of OK-Junior has been quite hard-fought, especially on top of the race. There were a lot of position exchanges between the Italian Emanuele Olivieri (IPK Official Racing Team/IPK-TM Racing-Vega) and the Thai Enzo Tarnvanichkul (Tony Kart Racing Team/Tony Kart-Vortex). Tarnvanichkul had the upper hand from the mid part of the race and the attention was then shifted to the duel for the other podium places. These involved the Belgian Thibaut Ramaekers (VDK Racing/KR-Iame), who managed to overtake Olivieri, who was third. The Scot Zac Drummond (Parolin Motorsport/Parolin-TM Racing) recovered several places and ended fourth leading Zhenrui Chi (Beyond Racing Team/KR-TM Racing) and the Brazilian Miguel Costa (Sauber Academy/KR-Iame). Thanks to the victory in Sarno and the third position in Lonato, Olivieri could celebrate the victory of the championship. The second and third place respectively went to Enzo Tarnvanichkul and Zac Drummond.
OKJ Final
Enzo Tarnvanichkul (THA)
Thibaut Ramaekers (BEL)
Emanuele Olivieri (ITA)
OKJ, WSK Final Cup final standings
Emanuele Olivieri (ITA) points 191
Enzo Tarnvanichkul (THA) points 153
Zac Drummond (SCO) points 150

OK – Matveev wins the Final, Turney the Championship.
The British driver Joe Turney (Tony Kart Racing Team/Tony Kart-Vortex-LeCont) pushed hard since the beginning of the Final trying to win the race, but the young Dmitry Matveev (KR Motorsport/KR-Iame), despite being at his first experiences in the category, was very determined and took the lead keeping it all the way to the flag. Thanks to the second place, Turney won the championship though. The third place in the Final went to the French Evan Giltaire (KR Motorsport/KR-Iame) at the end of a battle involving the Brit Nathan Tye (Sodikart/Sodikart-TM Racing) and the Swede Oscar Pedersen (Ward Racing/Tony Kart-Vortex). Matveev and Khavalkin closed behind Turney in the final standings of the championship.
OK Final
Dmitry Matveev
Joe Turney (GBR)
Evan Giltaire (FRA)
OK, WSK Final Cup final standings
Joe Turney (GBR) points 179
Dmitry Matveev points 139
Anatoly Khavalkin points 110

KZ2 – Maragliano dominates the final, but Van Walstijn wins the championship.
The Final of KZ2 has been quite chaotic, not particularly regarding the top positions, where the Italian Alex Maragliano (Maranello SRP/Maranello-TM Racing-Vega) pulled away since the beginning and was chased by the Czech Marek Skrivan (Sumako IPK Racing/IPK-TM Racing), but the fight for the other places has been quite intense. Eventually, the Italian William Lanzeni (EKS-TM Racing) managed to have the best of Giuseppe Palomba (BirelART Racing/BirelART-TM Racing), who was later on handed a 5s time penalty for the dropped front fairing and therefore relegated to P9. The fourth place went to the Romanian driver Daniel Vasile (DR/DR-Modena), who led the French Emilien Denner (Sodikart/Sodikart-TM Racing). The Frenchman completed a great recovery race. Cristian Bertuca (BirelART Racing/BirelART-TM Racing) had to retire instead after starting from the pole position. The victory of the championship went to the Dutch Senna Van Walstijn (Sodikart/Sodikart-TM Racing-Vega) despite he ended only 11th in the Final. This result was possible thanks to the victory scored in Sarno and the points collected in the Prefinal. The podium of the championship was rounded off by Noah Milell (Tony Kart Racing Team/Tony Kart-Vortex) in P2 and Alex Maragliano in P3.
KZ2 Final
Alex Maragliano (ITA)
Marek Skrivan (CZE)
William Lanzeni (ITA)
KZ2, WSK Final Cup final standings
Senna Van Walstijn (NLD) points 149
Noah Milell (SWE) points 134
Alex Maragliano (ITA) points 123