All the premises for a good sporting event got concrete and the 50th Trofeo delle Industrie, race organized by Parma Motorsport at the South Garda Karting circuit of Lonato, finished with a good success and a record presence of over 280 drivers from 46 different nations among the fields of the main and most qualified international teams.

The mark of the five Champions of the 50th Trofeo delle Industrie
The competition has been tough in all categories and some results have been surprising, like in the case of the smallest category, MINI Gr.3, where the victory went to an excellent Filippo Sala (Team Driver/KR-Iame-Vega), or in the powerful KZ2, where the exciting duel for the win went Alex Maragliano’s ways (Maranello SRP/Maranello-TM Racing-Vega). In OK-Junior the Colombian Salim Hanna Hernandez (Ricky Flynn Motorsport/LN-Vortex-Vega) secured a nice victory in the hard-fought closing laps. X30 Junior rewarded the efforts put in by Antonio Apicella (Team Driver/Kosmic-Iame-Komet) not only with the victory of the category, but also with the second Memorial Carlo Fabi for his domination in all stages of the weekend. A young emerging talent like Sebastiano Pavan (Team Driver/Tony Kart-Iame-Komet) came to the fore in X30 Senior dominating the final stages of the event.
The most numerous team was Team Driver Racing Kart which fielded 20 drivers, while the most represented nation was Sweden with 13. 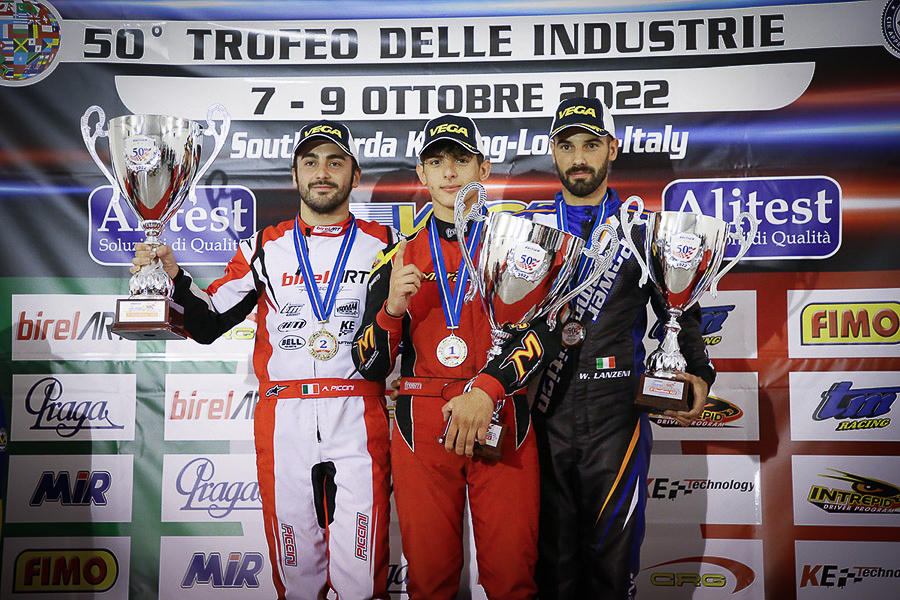 Alex Maragliano takes the victory in the KZ2 final.
Among the many protagonists of KZ2, two actors displayed a higher level. Their duel ended with the victory going to Alex Maragliano (Maranello SRP/Maranello-TM Racing-Vega). Giuseppe Palomba (BirelART Racing KSW/BirelART-TM Racing) had crossed the finish line on top, but his overtaking move on Maragliano was judged too aggressive and the driver from Naples was therefore handed a 5s time penalty. Giuseppe Palomba was therefore relegated to P5 after setting the pace for the whole weekend.
The final podium of KZ2 saw a combative Alessio Piccini (TribeOne/BirelART-TM Racing) in second place and William Lanzeni (Lanzeni/EKS-TM Racing) in third, while the fourth place went to Marco Tormen (Tormen/Parolin-TM Racing).

Surprising epilogue in MINI as the victory goes to Filippo Sala.
In MINI Gr.3 Filippo Sala (Team Driver/KR-Iame-Vega) has been the great interpreter of the final when he managed to avoid getting stuck in the incident that involved the top three drivers that were fighting a nice duel. These were the Dutch of team Alonso Kart by Kidix Dean Hoogendoorn and the two BabyRace’s teammates, the Turkish Iskender Zulfikari and the Romanian Bogdan Cosma-Cristofor. Filippo Sala managed therefore to fly to the victory followed by his teammate from Brazil Augustus Toniolo and the Australian William Calleja (Parolin Motorsport/Parolin-TM Racing). The fourth and fifth place went to the Pole Juliuz Ociepa (Gold Kart Racing/Righetti Ridolfi-TM Racing) and the Spanish Bosco Arias (DPK/Alonso Kart-Iame).
MINI Final standings.
1. Filippo Sala (ITA)
2. Augustus Toniolo (BRA)
3. William Calleja (AUS)
4. Juliuz Ociepa (POL)
5. Bosco Arias (ESP) 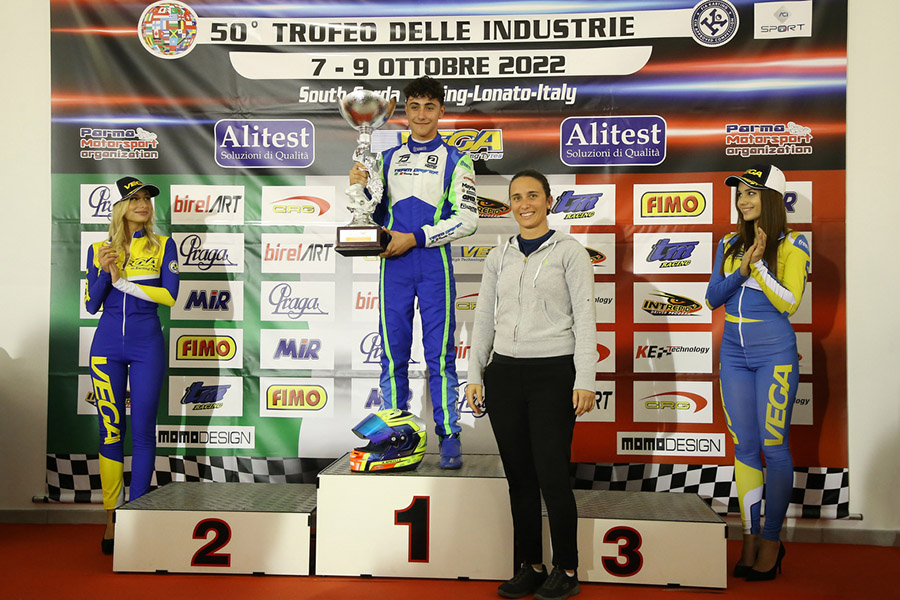 Antonio Apicella wins it all in X30 Junior, including the Memorial Carlo Fabi.
Antonio Apicella (Team Driver/Kosmic-Iame-Komet) has been the undisputed dominator of X30 Junior. He won all the stages of the weekend, from the pole position and the heats to the Prefinal and the Final. He therefore claimed also the Memorial Carlo Fabi, the award that he won for the second time in a row. The final laps of the race ended in “slow” regime following an off of 9 drivers due to the water leak of a kart. Behind Apicella, Riccardo Leone Cirelli (Autoeuropeo/Tony Kart-Iame) was second and Giacomo Maman (TB Kart/TB Kart-Iame) was third after a penalty handed to Davide Bottaro for the dropped front fairing. The fourth place went to Riccardo Ferrari, also of Team Driver, and the fifth to Filippo Tornaghi (Zanchi Motorsport/Tony Kart-Iame).
X30 Junior Final standings.
1. Antonio Apicella (ITA)
2. Riccardo Leone Cirelli (ITA)
3. Giacomo Maman (ITA)
4. Riccardo Ferrari (ITA)
5. Filippo Tornaghi (ITA)

Sebastiano Pavan dominates X30 Senior.
The final stages of X30 Senior have been dominated by Sebastiano Pavan (Team Driver/Tony Kart-Iame-Komet), who secured an impeccable win in Prefinal and then in the Final building a good margin on his rivals. The Norwegian Marcus Saeter (Ward Racing/Tony Kart-Iame) and Danny Carenini, also of Team Driver and winner of the previous two editions of the Trofeo delle Industrie, finished in the order. Edoardo Ludovico Villa (TB Kart Racing Team/TB Kart-Iame) completed a great recovery ending fourth after gaining 30 places due to the retirement in the Prefinal when he had an incident. The fifth place went to Federico Albanese (Modena Kart/Tony Kart-Iame).
X30 Senior Final standings.
1. Sebastiano Pavan (ITA)
2. Marcus Saeter (NOR)
3. Danny Carenini (ITA)
4. Edoardo Ludovico Villa (ITA)
5. Federico Albanese (ITA)

Complete results are available at: www.trofeodelleindustrie.it