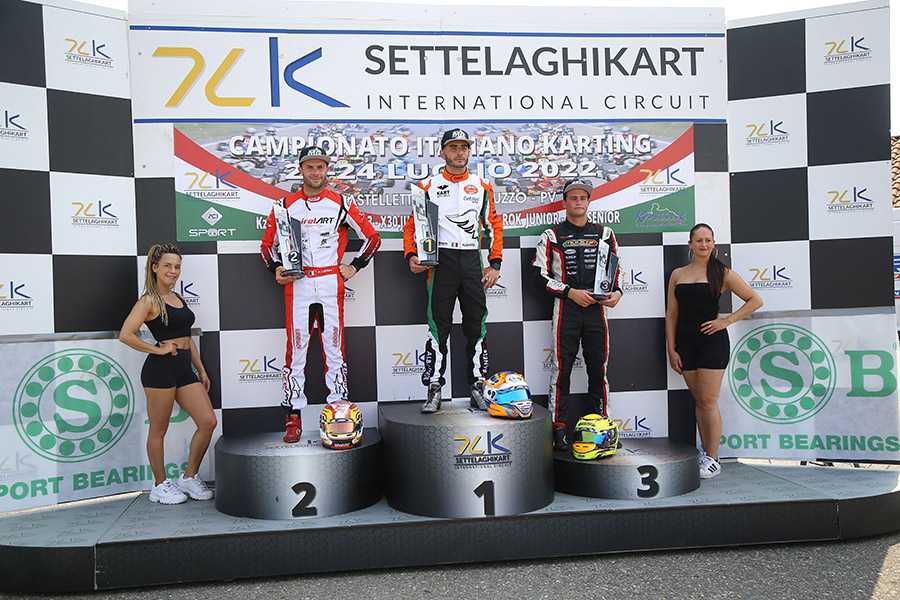 The hot temperatures at the International Circuit 7 Laghi Kart of Castelletto di Branduzzo challenged the protagonists of the third round of the Italian ACI Karting Championship, but the spectacle on track did not suffer for this. A lot of exciting races were run in all categories, from the smallest 60 Minikart and MINI Gr.3, to the most powerful KZ2 and the single makes Iame X30 and Rok.

The participation has been quite exceptional also in this third round of the season, after the openers in Franciacorta (record of 335 drivers on the track) and Ugento (246 drivers). In Castelletto more than 300 drivers were present, exactly 308 from 37 different countries.

The President of the Karting Commission of ACI Sport Raffaele Giammaria was present, who took the chance to have a meeting with the representatives of some teams and to discuss with them season 2023 as the Commission is working to prepare for the coming season.

60 Mini – Girardello and Coco share the success.
In 60 Mini, Gioele Girardello (Girardello/IPK-TM Racing-MG) won race-1 leading the protagonist of the first part of the weekend Edoardo Mario Sulpizio (TK Driver Academy/EKS-TM), who was second overall and first of the Under 10. The third place went to Patrick Bissa (Bissa/EKS-TM Racing), the fourth to Michele Orlando (Orlando/IPK-TM Racing), who proceeded Riccardo Brangero (Brangero/Parolin-TM Racing). The victory of the second final went to Domenico Coco (Modena Kart/Energy Corse-TM Racing), who also won Under 10. The second place went to Gioele Girardello at the end of a good comeback due to the grid inversion, Pietro Lilli (LGK Racing/BirelART-TM Racing) was third.

X30 Junior – Cathal surprising all in race-1, Apicella wins race-2.
The Brit Clark Cathal (Victory Lane/Red Speed-Iame-Komet) claimed a surprising win in race one of X30 Junior. He recovered a lot of places and claimed the win. Behind Cathal, Riccardo Leone Cirelli (Autoeuropeo/Tony Kart-Iame) was second, while the French Jules Caranta (Moni/Exprit-Iame-Komet) had a great pace in the heats but had to settle for P3. The fourth place went to Giacomo Maman (TB Kart Racing Team/TB Kart-Iame), the fifth to the Portuguese Noah Monteiro (Victory Lane/Red Speed-Iame), the sixth to Antonio Apicella (Team Driver/Kosmic-Iame), who recovered 13 places. Antonio Apicella kept his momentum in the second final: he got the lead early on and kept it until the chequered flag, leading Jules Caranta and Giacomo Maman (TB Kart Racing Team/TB Kart-Iame).

Complete results are available at https://www.acisport.it/it/CIK/home

LA GAZZETTA DELLO SPORT. A special page on the event of the Italian ACI Sport Karting Championship at the International Circuit 7 Laghi Kart of Castelletto di Branduzzo will be published on Wednesday, July 27 by the sports magazine La Gazzetta dello Sport.

ACI Sport Karting, important meeting with the Manufacturers in view of the 2023 season