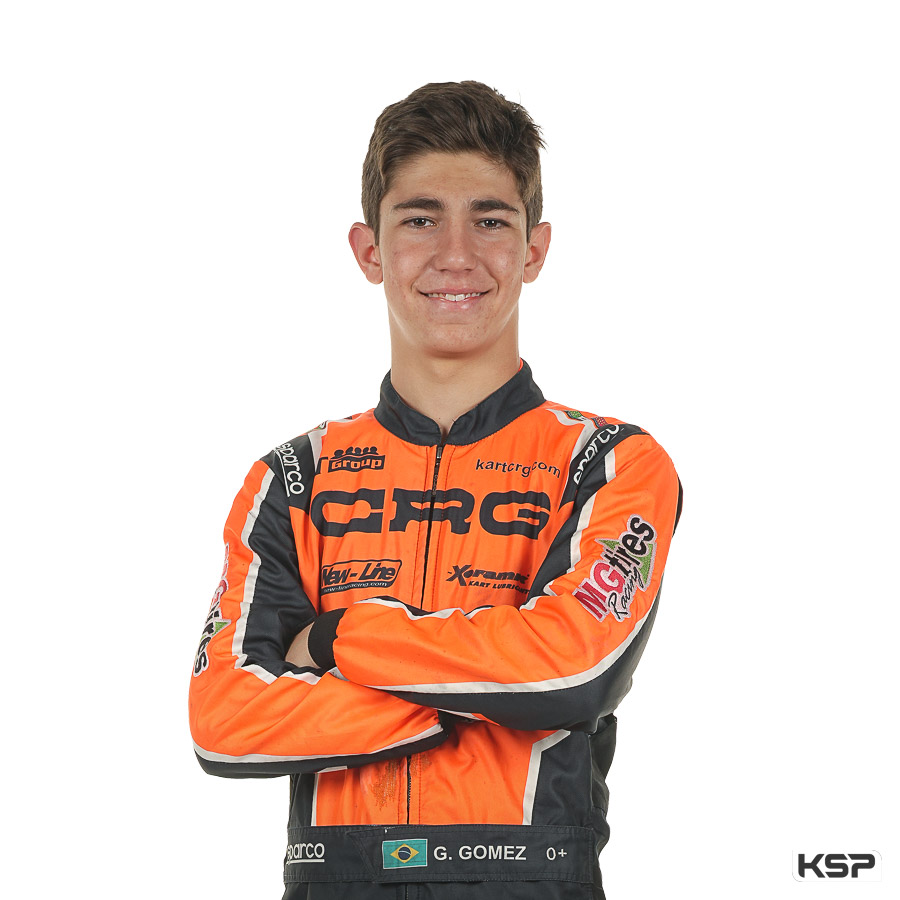 “My birthday falls on the day of the 2022 FIA Karting World Championship!”

On his second appearance at an FIA Karting event, which was also his second trip to Europe, Brazilian Gabriel Gomez managed to achieve pole position at the 2021 OK World Championship in Campillos, Spain. A podium contender, Gomez was disappointed in the rainy Final, but his performance did not go unnoticed. He has been offered the possibility to race a full season in OK. His goal is to shine in Sarno on 18th September, his 16th birthday!

Can you introduce yourself?

I was born in Brazil in Fioranopolis in 2006. Today I live in the Sao Paulo region, where we have three beautiful karting circuits. This is the place to be if you want to break into motorsport! I was already driving a baby kart when I was three years old. In Brazil, you can start racing at the age of five and that’s what I did! My father is a former racing driver and he passed on his passion to me. He manages a karting team, which has always made it easier for me to progress. If it hadn’t been for that, I’m not sure we would have had enough money to race at a high level in another team. We use CRG equipment and we race in all categories with many drivers, including OK in the Brazilian Championship.

What is your record in Brazil?

Why did you want to race in Europe?

With my team, we wanted a new experience and be able to compete at a higher level. That’s why I took part in the 2020 FIA Karting World Championship in OK-Junior in Portimao, Portugal. Then we came back to Europe a year later for the OK World Championship in Campillos. I had an incredible time there, taking pole position. On that occasion I was using an engine from my Brazilian engine builder. I was still in third place after the heats, before I crashed in the rain in the Final. The CRG factory saw my potential on that occasion and wanted to incorporate me into their team in 2022 with a big programme.

That must have been a big change in your life?

Yes, I moved into the flat on the CRG premises and had to continue with Brazilian school on the internet, which is not easy. But it is a fantastic and motivating experience. I will have the opportunity to go back to Brazil in August, before coming back to prepare for the World Championship, one of my big objectives for the season.

How is your collaboration with CRG going?

It’s going very well! CRG has recently experienced a less favourable period than usual. But the factory has worked in the right direction and we now have very efficient equipment. This season, our IAME engines from BM Engines have contributed to this competitiveness. I try to be worthy of it, without putting too much pressure on myself, because CRG counts on me to get good results. I have achieved several top ten finishes, including a fifth place in the FIA Karting European Championship event at Kristianstad in Sweden. In the factory and on the track, the work is constant to progress further. It’s interesting and motivating.

In 2021, the World Championship could not be held in Brazil. Was this a disappointment?

Birigui is a very beautiful circuit, with great infrastructure. Of course I would have liked to race in the World Championship there. We had done several tests and it would have been interesting to see how the European drivers would have performed compared to the locals.

Did you find it difficult to adapt to racing in Europe?

The race format is different. In Brazil we don’t have as many Qualifying Heats as in a European Championship event in OK. However, the Final lasts much longer. So we don’t need to be too aggressive at the beginning of the race. We have a lot of laps and we try to build a strategy. Sometimes drivers help each other, without trying to overtake, to try to catch up with another group or to escape from the group we are in.

In Europe, the drivers are much more incisive, even aggressive, as soon as the lights go out! Everyone is looking to gain places very quickly and they don’t hesitate to close the doors in the first few corners. When I arrived in Europe, I had to get used to it.

How do you see your future?

I don’t really know yet what I’m going to do in 2023. At the moment I’m focused on this season. At the moment my agreement with CRG is only for 2022. I would like to find a solution to continue in Europe next year. For the following years, we will see…

Who are your favourite drivers and circuits?

I have a lot of admiration for the career of Niki Lauda. At the moment I am impressed by Max Verstappen. In Europe, my favourite circuits are Campillos in Spain and Franciacorta in Italy.

ACI Sport Karting, important meeting with the Manufacturers in view of the 2023 season