In the day dedicated to qualifying heats at the South Garda Karting Circuit in Lonato, the sun of the morning has been replaced by rain in the afternoon, which shuffled the cards further at the 32nd Andrea Margutti Trophy. The race organized by Parma Motorsport has been continuously run since 1990 to remember the young Andrea Margutti that prematurely passed away in 1989. The final stages on Sunday, May 2nd, will begin at 13:30 and will enjoy live streaming coverage from the websites trofeomaurgutti.com and southgardakarting.it. 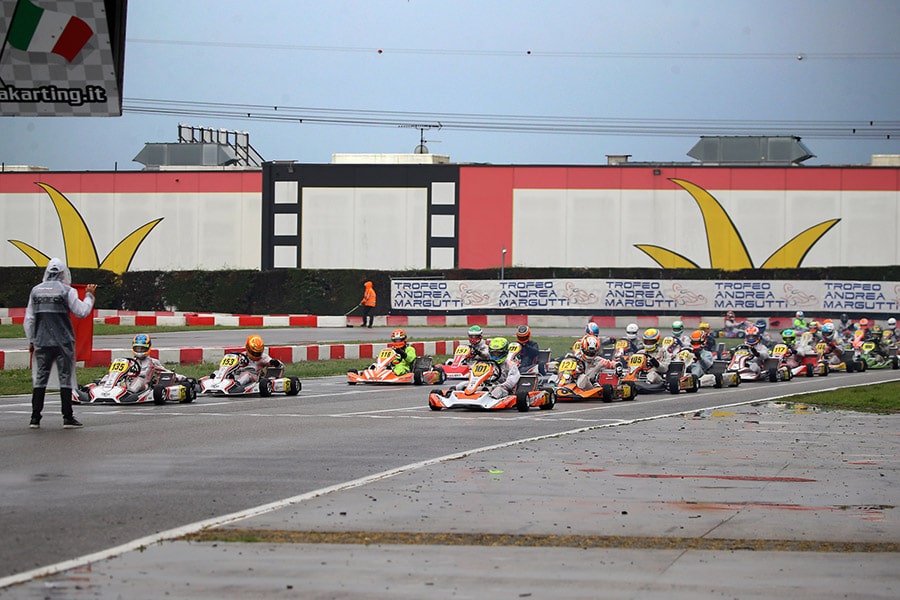 In KZ2 three drivers among all: Van Walstijn, Nomblot and Denner.
In KZ2, three drivers have been winning the heats held on Saturday: the French Emilien Denner (Intrepid Driver Program/Intrepid-TM Racing) won the first on the dry, while the French Jean Nomblot (CPB Sport/Sodi-TM Racing) won the second on the wet after claiming the pole position in qualifying on similar conditions. The Dutch Senna Van Walstijn (CPB Sport/Sodi-TM Racing) won the third heat instead. Classification-wise, Van Walstijn, who has won the past edition of the trophy, is in the best position after the heats and therefore will start the Prefinal on Sunday, May 2nd, from the pole position.
KZ2 classification after the heats: 1. Van Walstijn; 2. Nomblot; 3. Denner; 4. Van Hoepen; 5. Lundberg. 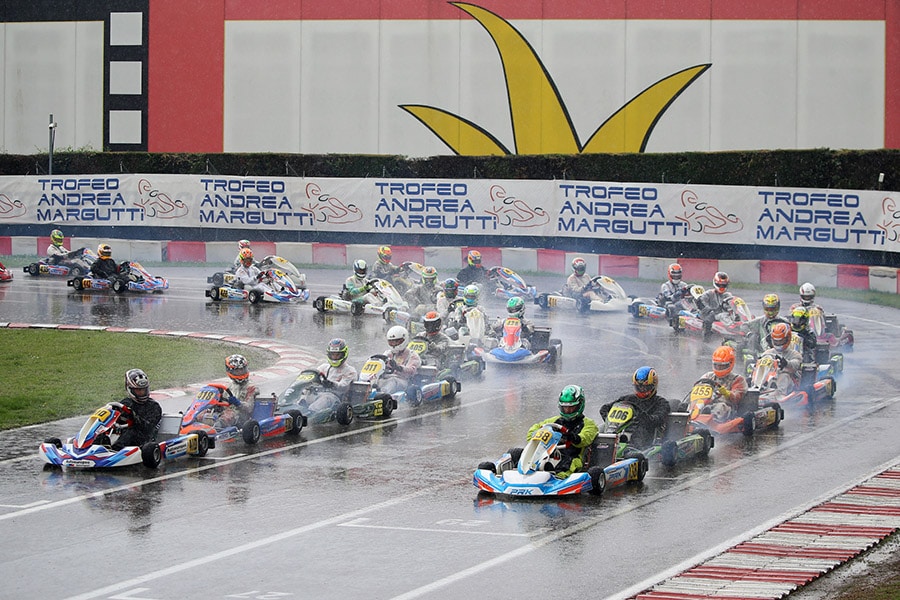 Comanducci unstoppable in X30 Senior.
Cristian Comanducci (PRK/Tony Kart-Iame) claimed one win on the dry and one on the wet. He also was second behind Danny Carenini (Autoeuropeo Motorsport/Tony Kart-Iame) – also on the wet – and is the provisional leader of X30 Senior. The pole sitter, the French Sacha Maguet (BirelART-Iame) was confirmed among the quickest with great results but had to settle for P5 after the heats. The other heat winners were, Valentino Baracco (Novalux/Luxor-Iame), David Locatelli (Zanchi Motorsport/Tony Kart-Iame) and Andorra’s Alex Machado (Valtex/Tony Kart-Iame).
X30 Senior classification after the heats: 1. Comanducci; 2. Baracco; 3. Malizia; 4. Machado; 5. Maguet. 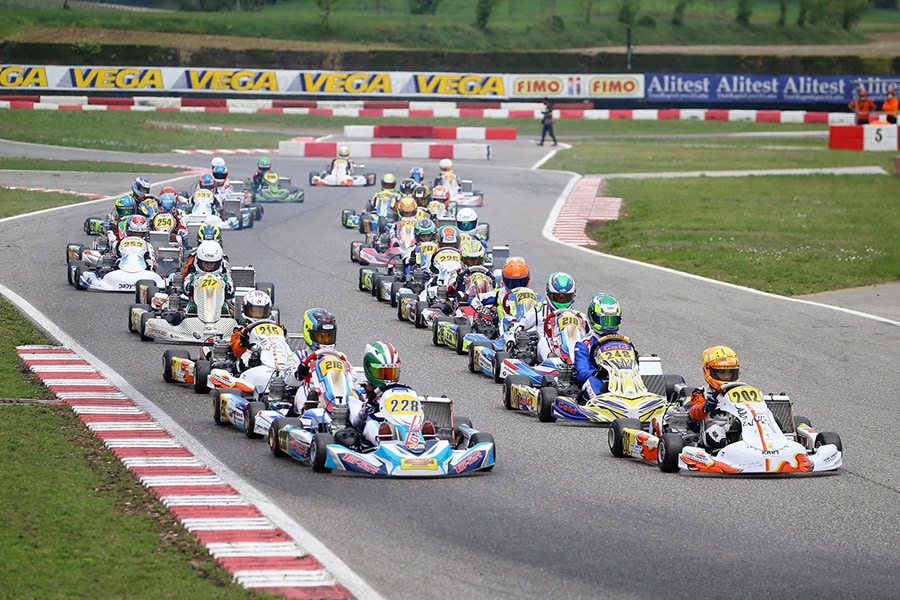 Pavan is the provisional leader of X30 Junior.
In X30 Junior, Sebastiano Pavan (Team Driver/KR-Iame) is the favourite after topping the charts in qualifying and claiming a win and a second place in the heats. The other heat winners were Samuele Leopardi (Zanchi Motorsport/Tony kart-Iame) and Riccardo Leone Cirelli (Autoeuropeo/Tony Kart-Iame). Francesco Marenghi (Team Driver/KR-Iame) and Giulio Olivieri (Righetti Ridolfi-Iame) also put in very good performances and were always among the front runners.
X30 Junior classification after the heats: 1. 1. Pavan; 2. Marenghi; 3. Olivieri; 4. Leopardi; 5. Paul Alberto. 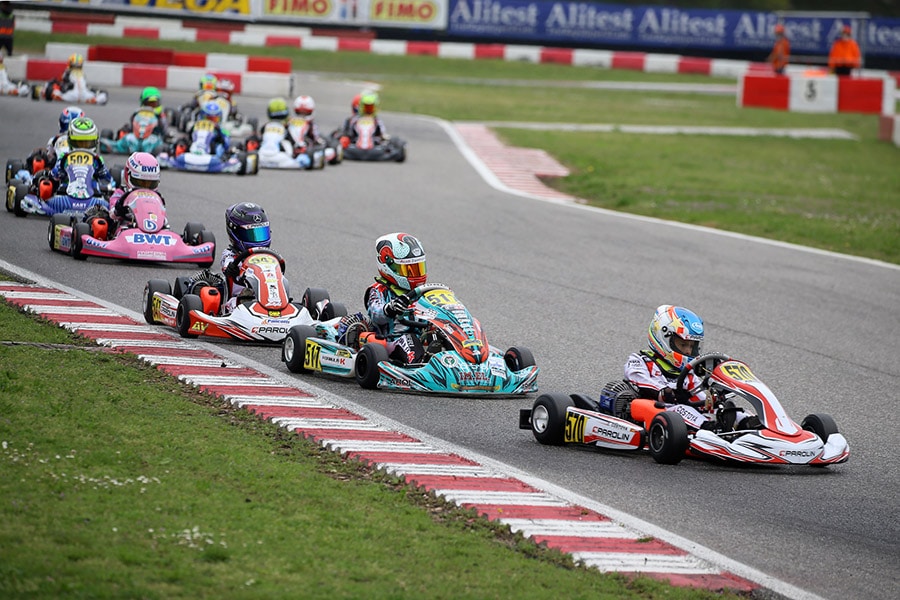 The program.
Sunday, May 2nd: Second chance races at 11:10. Prefinals will follow at 13:30, Finals at 15:00 with Live Streaming at www.trofeomargutti.com.