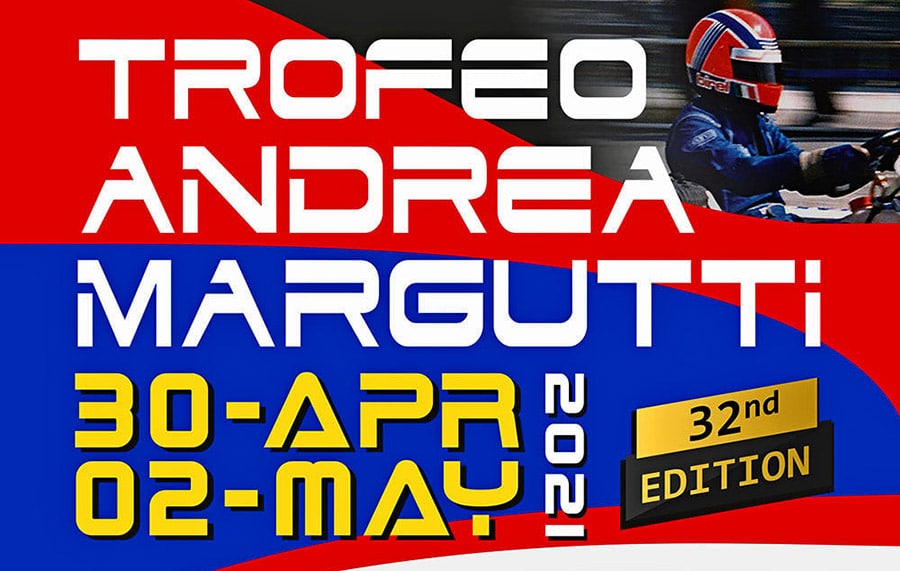 The 32nd Andrea Margutti Trophy – race organized by Parma Motorsport and scheduled for April 30th – May 2nd at the South Garda Karting circuit – counts 260 entered drivers. Among them a lot of excellent names will contest categories KZ2, MINI Gr.3, IAME X30 Junior and X30 Senior. A total of 32 different countries will be represented in the event and France is going to be the most represented foreign country with 37 drivers, while the team fielding the highest number of drivers, 17, is Team Driver Racing Kart.

KZ2. Category KZ2 has 54 entered drivers. These are led by 2019 World Champion Emilien Denner, who will be racing for Intrepid Driver Program. He recently won the WSK Super Master Series in Lonato and won the Andrea Margutti Trophy back in 2019. Among the strongest drivers, the Dutch Senna Van Walstijn will compete on Sodikart run by CBP Sport. He won the Andrea Margutti Trophy in 2020. Jean Nomblot will be his teammate. Marco Tormen of Modena Kart on BirelART, Lorenzo Giannoni at the debut with CRG Racing Team, Massimo Dante with Maranello Kart, William Lanzeni on Righetti-Ridolfi, Christopher Zani with BRM Racing and Andrea Dalè on CRG are expected to put in a strong performance.

MINI. MINI Gr.3 will get underway with 81 entered drivers. Among these, some very young drivers are very competitive as the Thai Enzo Tarnvanichkul and the Australian Griffin Peebles of Team Driver, the Czech Jindrich Pesl of Baby Race, Emanuele Olivieri of Formula K Serafini, the Dutch Dean Hoogendoorn of Kidix, the Austrian Niklas Schaufler of Emme Racing, the Romanian David Cosma-Cristofor of Gulstar Racing, the Spaniards Christian Costoya and Matias Orrjuela of Parolin Motorsport, the Slovenian Matic Presa of Leclerc by Lennox Racing and a lot of other drivers are ready to shine.

X30 JUNIOR. IAME X30 Junior counts 53 entered drivers. The young Dutch René Lammers, fresh MINI champion in WSK Super Master Series and winner of the Andrea Margutti Trophy of 2020 will be at the start. Among the most competitive interpreters of X30 Junior, that are leading the IAME Series Italy and the Italian Championship, Sebastiano Pavan and Francesco Marenghi will be at the start with Team Driver, Samuele Leopardi with Zanchi Motorsport, Riccardo Leone Cirelli and the Bulgarian Kaloyan Verbitzaliev with Autoeuropeo, Alessandro Minetto with Gamoto, Andrea Pirovano with Feroce Motorsport and Giulio Oliveri with Righetti-Ridolfi.

X30 SENIOR. The entry list of IAME X30 Senior includes 72 drivers. These are led by the 2017 winner of the Andrea Margutti Trophy, Vittorio Maria Russo, on TB Kart. Among the most competitive, David Locatelli and Mattia Ingolfo will compete for Zanchi Motorsport, the 2020 Italian Champion Danny Carenini, Arnaud Malizia and Andrea Moretti for Autoeuropeo, Valentino Baracco for Novalux, Manuel Scognamiglio for Gamoto, the Swiss Tanja Muller for New Technology, Federico Rossi and Cristian Comanducci for PRK. The participation of Ward Racing’s drivers will also be good. Brandon Maisano will compete on Intrepid. He won the 2009 Andrea Margutti Trophy in KF2 and the F4 Trophy of the Italian Formula 4 Championship in 2010.

Complete information are available at www.trofeomargutti.com.