After 42 qualifying heats run on Friday and Saturday, the fourth and closing round of WSK Super Master Series at the South Garda Karting circuit of Lonato named the finalists that will challenge each other on Sunday for the title in MINI, OKJ, OK and KZ2, in the event that involved 316 drivers coming from 44 countries. 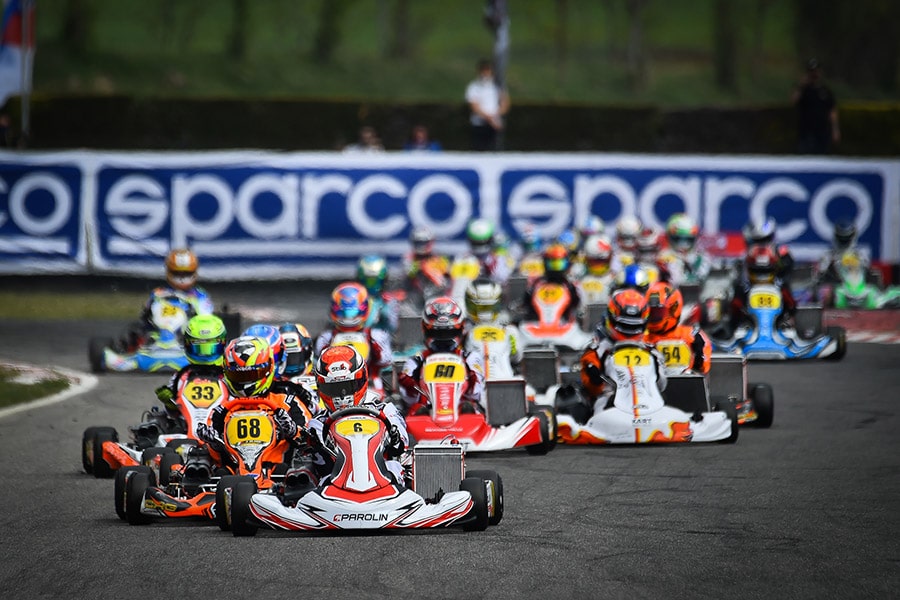 The grand finale will take place on Sunday, April 25th, and the live streaming coverage will start at 10:40 with the two Prefinals of each category followed by the four Finals: at 14:20 the OK Final, at 14:50 MINI’s, at 15:20 KZ2’s and at 15:50 OKJ’s. A total of 140 points will be awarded to the winners of the Prefinal (from 60 to the winner down to the others) and of the Final (from 80 points downwards), which keeps a lot of drivers in the challenge for the titles.

Denner and Celenta set the pace in KZ2.
In KZ2 the French Emilien Denner (Intrepid Driver Program/Intrepid-TM Racing) secured the pole position and then claimed two wins in the heats, but the rivals are ready to challenge him starting from his main rival, the Italian Francesco Celenta (Parolin Motorsport/Parolin-TM Racing), who also claimed two wins. The Italian Alex Irlando (CRG Racing Team/CRG-TM Racing), the Dutch Marijn Kremers (BirelART Racing/BirelART-TM Racing), the Swede Viktor Gustavsson (Leclerc by Lennox/BirelART-TM Racing) and the Spanish driver Pedro Hiltbrand also displayed a great shape, the latter being very competitive since the debut with the Team Leclerc by Lennox Racing. Current classification leader from Finland Juho Valtanen (KR Motorsport/KR-Iame) accused a bit of delay and is currently only 12th at the end of the heats.
KZ2 classification after the heats: 1. Denner; 2. Celenta; 3. Irlando; 4. Kremers; 5. Gustavsson; 6. Hiltbrand; 7. Renaudin; 8. Palomba; 9. Iglesias; 10. Van Walstijn.

Camara dominates OK.
The Brazilian Rafael Camara (KR Motorsport/KR-Iame) is leading the championship and displayed a great shape here too winning three heats that keep him on top of the charts. The Italian Luigi Coluccio (Kosmic Racing/Kosmic-Vortex) had a solid weekend so far and won one heat, as Camara’s teammates Arvid Lindblad, Andrea Kimi Antonelli, who is second in the championship, and the American Ugo Ugochukwu.
OK classification after the heats: 1. Camara; 2. Coluccio; 3. Ugochukwu; 4. Antonelli; 5. Turney; 6. Kucharczyk; 7. Severiukhin; 8. Tsolov; 9. Morgatto; 10. Andreasson.

Four wins for Al Dhaheri in OKJ.
In OK-Junior the driver from United Arab Emirates Rashid Al Dhaheri (Parolin Motorsport/Parolin-TM Racing) came to the fore at the debut in the championship after skipping the two rounds in La Conca and Sarno. Al Dhaheri won the four heats but also among the quickest were the Brazilian Matheus Ferreira (KR Motorsport/KR-Iame) and his teammate from Belgium Douwe Dedecker, that both claimed three wins, and the Japanese Kean Nakamura-Berta (Forza Racing/Exprit-TM Racing) that set the pole position in qualifying practice. Provisional classification leader from Jamaica Alex Powell (KR Motorsport/KR-Iame) started recovering some ground after an unlucky qualifying practice.
OKJ classification after the heats: 1. Al Dhaheri; 2. Ferreira; 3. Dedecker; 4. Nakamura-Berta; 5. Slater; 6. Bohra; 7. Deligny; 8. Macintyre; 9. Gubenko; 10. Kutskov.

Great battles in MINI.
The situation in MINI still seems to be quite open to all results after 15 qualifying heats . The duel for the top includes the two leaders Christian Costoya (Parolin Motorsport/Parolin-TM Racing) and René Lammers (Baby Race/Parolin-Iame), with the Dutch finding his way past the rival by one point after the heats. Costoya lost a few places, but he is ready to bounce back. The Russian Gerasim Skulanov (CRG Racing Team/CRG-TM Racing), the Thai Enzo Tarnvanichkul (Team Driver/KR-Iame), the Italian Emanuele Olivieri (Formula K Serafini/IPK-TM Racing), the Belgian Dries Van Langendonck (BirelART Racing/BirelART-TM racing) and the Colombian Matias Orjuela (Parolin Motorsport/Parolin-TM Racing) put in strong performances so far though.
MINI classification after the heats: 1. Lammers; 2. Tarnvanichkul; 3. Skulanov; 4. Costoya; 5. Olivieri; 6. Orjuela; 7. Van Langendonck; 8. Cosma-Cristofor; 9. Ivannikov; 10. Peebles.