The fourth and closing weekend of the WSK Super Master Series has kicked off in Lonato as 316 karting drivers coming from 44 different countries made it onto the track. These important figures show that this international karting series is one of the most participated in the world.

Qualifying heats in the morning started defining the favourites to the win, but there is still a long way to go as the overall path will include 42 heats, 8 Prefinals and 4 Finals, one each for the categories KZ2, OK, OKJ and MINI. 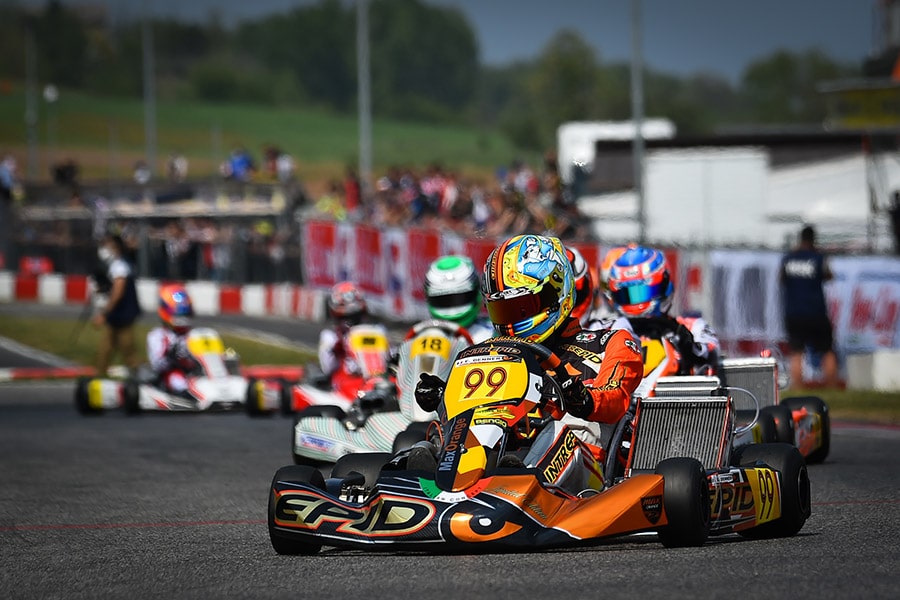 Denner on top in qualifying of KZ2.
In KZ2 the French driver Emilien Denner on Intrepid-TM Racing run by Intrepid Driver Program, set the pace in KZ2’s qualifying posting the best time overall and of Series-1 in 45.220s, while the fastest time of Series-2 was set by the Italian Francesco Celenta of Parolin Motorsport on Parolin-TM Racing in 45.394s. The Swedish driver Viktor Gustavsson (Leclerc by Lennox/BirelART-TM Racing), the Italian Alex Irlando (CRG Racing Team/CRG-TM Racing) and current classification leader from Finland Juho Valtanen (KR Motorsport/KR-TM Racing) were also among the quickest.

OKJ speaks Japanese with Nakamura.
In the three Series run in OK-Junior, the Japanese Kean Nakamura-Berta (Forza Racing/Exprit-TM Racing) posted the fastest time overall in Series-2 (47.508s), while the Brazilian Matheus Ferreira (KR Motorsport/KR-Iame) was the quickest of Series-3 in 47.539s and his teammate from Belgium Douwe Dedecker was the fastest of Series-1 in 45.578s. Classification leader Alex Powell (KR Motorsport/KR-Iame) had a more troubled session instead.

Classification leader Costoya sets the quickest time in MINI.
In MINI the quickest time overall was set in Series-4 by classification leader Christian Costoya (Parolin Motorsport/Parolin-TM Racing) who completed his best loop after 52.719s, while the Swiss Kilian Josseron (Team Driver/KR-Iame) was the fastest of Series-3 in 52.869s, the Turkish driver Alp Aksoy (Baby Race/Parolin-Iame) led Series-2 in 52.873s and the Slovenian Matic Presa (Leclerc by Lennox/BireART-TM Racing) did the same in Series-1 with a best time of 53.026s.

Follow the progress of the WSK Super Master heats in Lonato