In the big pool of the World Championship

In Portimao at the FIA Karting World Championship -Junior, Aurélia and Ethan Nobels did not go unnoticed! Apart from being the only brother and sister to compete in the same category, Aurelia was also the only female driver among the 89 participants in this Competition, while Ethan was the youngest driver in the field, having not yet reached his 12th birthday. Originally from Belgium, but living in Brazil for several years, they did not hesitate to cross the Atlantic to explore the top level despite having much less experience than their rivals. 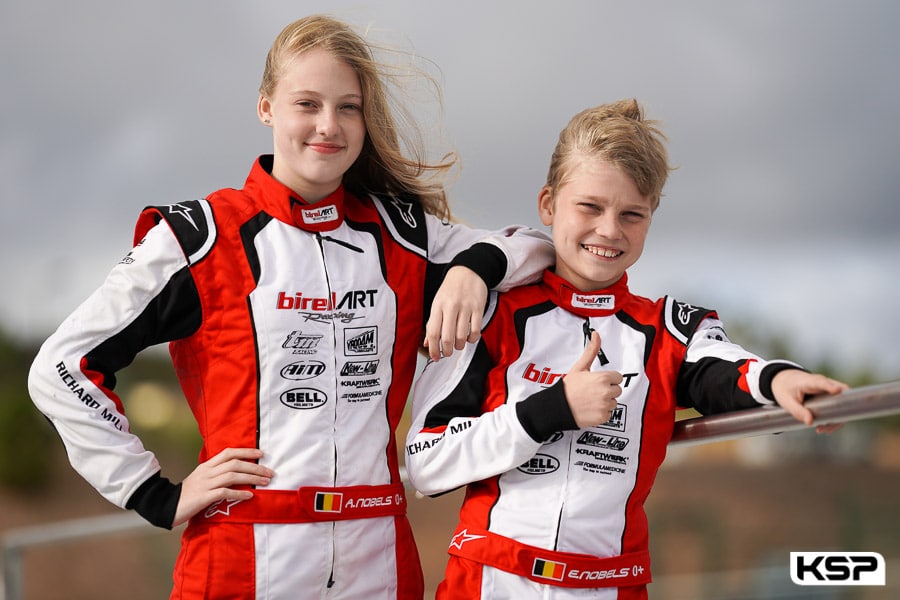 How did youdiscover karting?
Ethan: With my sister, we had the opportunity to have fun karting on an indoor circuit. We really liked it and, during the sessions, we got into the game by trying to improve our times and to beat each other’s time. We then carried out a test a competition kart on a real circuit. As we liked it, we started in 2018.

Is the standard in Brazil high?
Aurélia: Yes, there are a lot of good drivers. Brazilians who compete in karting and motor racing are passionate; they give their all to perform to the best of their ability. I try to improve with each race. For the moment, my best result is a 2nd place. My brother has already won and I hope to do the same soon.

What difficulties did you face when you arrived in Portimao?
Ethan: We had a lot of things to learn; the official Birel ART team, the circuit which is very different from those in Brazil, the grip of the tyres, the intensity of the races and, for my part, the power of the engine. In my country I race in a lower category than my sister because of my age. For us, it was really beneficial to do the Champions of the Future series race in Portimao a week before the World Championship.

What did you expect in terms of results?
Aurélia: Honestly, I knew it would be difficult. I often had the opportunity to watch videos of the FIA Karting Championships. I even said to myself, “Wow, you’re going to race with the best Juniors in the world!”. This type of competition is much more professional than what we usually experience. From the first to the last, there are no really average drivers. Everyone is part of a very well organised team, everyone is competitive! We knew that it would be almost impossible to make it to the final. But it was an unforgettable experience and we learned a lot in a very short time.

What will your programme be in 2021?
Aurélia: Along with Ethan, I’m going to continue racing in Brazil, with the aim of preparing as best we can for the Junior World Championship to be held in our country, in Birigui. We live in Sao Paulo, which is about five hours by car from the circuit. Maybe we will try to come and race in Europe if it is possible, in order to perfect our testing for this great FIA Karting meeting. For my part, I will follow the setting up of the next “Girls on Track” initiative with interest, in which I would like to participate.

“Our common goal is to prepare for the 2021 World Championship in Brazil.”