The WSK Open Cup in Adria successfully ended season 2020 despite all the difficulties connected with the Covid-19 emergency. The double round of this closing event highlighted once again the quality and competitiveness of a lot of young champions. 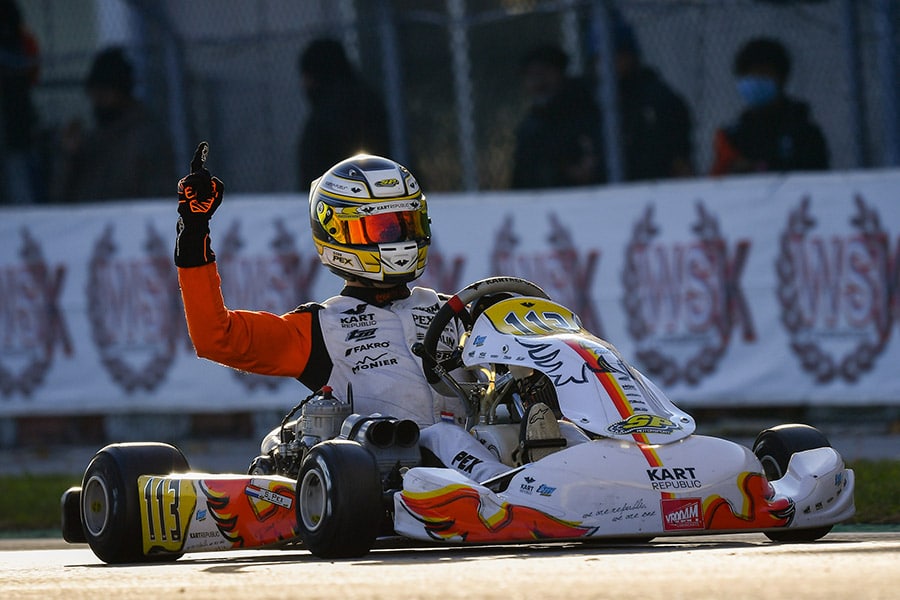 The victories of the KZ2 finals go to Albanese and Pex, the title to Pex.
The Italian Danilo Albanese (KR Motorsport/KR-Iame-Vega) won the first of the two finals after a good duel with the teammate from Holland Stan Pex (KR Motorsport/KR-TM Racing), who led his fellow country-man Senna Van Walstijn (CPB/Sodikart/TM Racing), as the latter crossed the finish line in third place after leading the first part of the race. The Swede Viktor Gustafsson (Leclerc by Lennox/BirelART-TM Racing) has been slowed down by an early contact and eventually finished the race only in eighth place. Stan Pex took the lead of the second Final early on and kept it all the way to the flag. He led Senna Van Walstijn and the Finn Juho Valtanen (KR Motorsport/KR-TM Racing) who took P3 from Danilo Albanese. The fifth place went to the Italian Leonardo Marseglia (BirelART-TM Racing).

Barnard dominates OK.
Category OK was dominated by the Brit Taylor Barnard (Rosberg Racing Academy/KR-Iame-Bridgestone), who claimed the full haul in the Prefinals and in the Finals of Round 1 and Round 2. Taylor Barnard proceeded the French Marcus Amand (VDK/KR-Iame) in the first final, as the latter gained three positions, while the third place went to the Swede Norton Andreasson (Ward Racing/Tony Kart-Vortex), who was followed by the Finn Niklas Pirttilahti (Forza Racing/Exprit-TM Racing). Barnard ran a solitary second final leading it from lights to flag. The second place went to Norton Andreasson, who won the battle with the Finn Tuukka Taponen (Tony Kart Racing Team/Tony Kart-Vortex). The Bulgarian Nikola Tsolov (DPK/KR-Iame) ended within the top positions in P4 and led the Austrian Charlie Wurtz (Exprit Racing Team/Exprit-Vortex) and Cristian Bertuca (BirelART Racing/BirelART-TM Racing). Marcus Amand was seventh due to a 5s time penalty.

Slater wins the final Round 1 and the title, Stenshorne the second final.
The Brit Freddie Slater (Ricky Flynn/Kosmic-Vortex-Vega) had the upper hand in OKJ in the closing meters when, together with the two Poles Tymoteus Kucharczyk (BirelART Racing/RK-TM Racing) and Karol Pasiewicz (BirelART Racing/BirelART-TM Racing), he managed to find his way past the British driver Arvid Lindblad (KR Motorsport/KR-Iame), who took the lead in the initial laps. The fight for the victory of the second final was won by the Norwegian Martinius Stenshorne (Leclerc by Lennox/BirelART-TM Racing-Vega). He proceeded the Brit Maxwell Oliver Dodds (Energy Corse/Energy-TM Racing), who led the race early on. The third step of the podium went to Arvid Lindblad, while the Pole Karol Pasiewicz (BirelART Racing-BirelART-TM Racing) was fourth and Freddie Slater fifth but with the Open Cup title already in his bag. 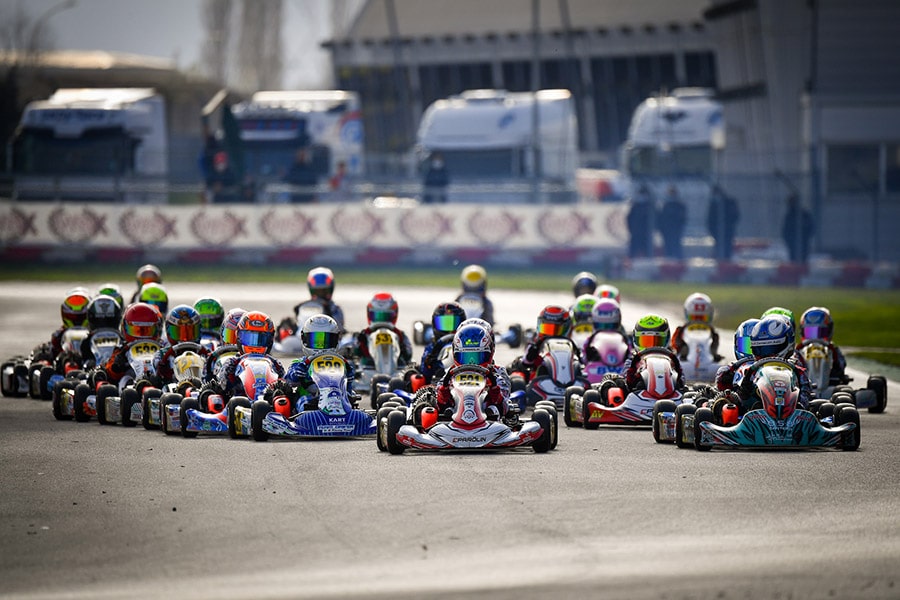 Gladysz and Monza get one victory each in MINI, as the title goes to Gladysz.
Incredible fights have taken place in MINI and the title fight was only decided in at the end of the second final. The victory of the first final was claimed by the Pole Maciej Gladysz (Parolin Racing/Parolin-TM Racing-Vega) a result that offered him a good option to the title, thanks also to a penalty handed to the Russian Gerasim Skulanov (Formula K Serafini/IPK-TM Racing), who had crossed the finish line on top. The Dutch René Lammers (Baby Race/Parolin-Iame) inherited the second position in Round 1 after leading the second part of the race. The third place went to the Asian Tiziano Monza (Sauber Karting/KR-Iame), while Emanuele Olivieri (Formula K Serafini/IPK-TM Racing) was fourth and Davide Bottaro (AV Racing/Parolin-TM Racing) fifth. In the second final Lammers initially got the lead, but then he had to concede it to the Pole Jan Przyrowsky (AV Racing/Parolin-TM Racing) and then to Tiziano Monza, who eventually claimed the win ahead of Przyrowsky and the Slovenian Aleksandar Bogunovin (Gamoto/Tony Kart-TM Racing), while Lammers was fourth and Gladysz fifth but he took the title nevertheless.