Home News International Event The protagonists of qualifying for Round 2 of WSK Euro Series came to the fore in Lonato.

The protagonists of qualifying for Round 2 of WSK Euro Series came to the fore in Lonato. 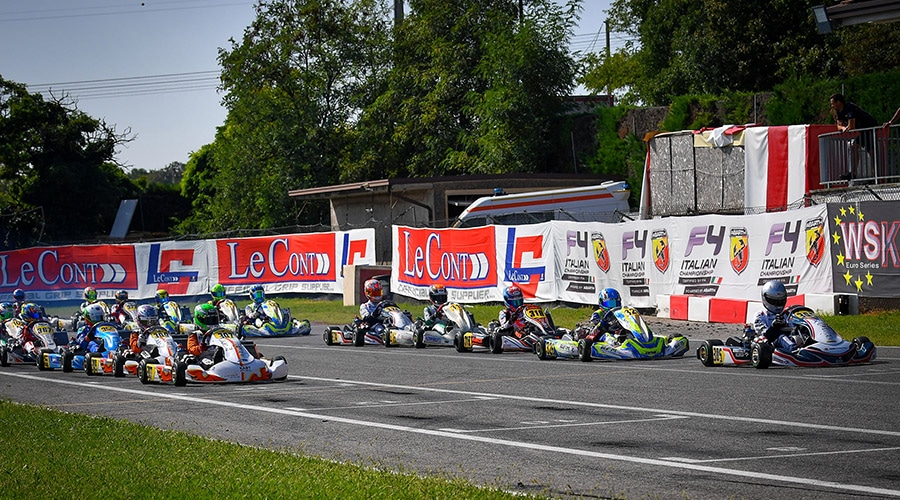 The closing stages of the WSK Euro Series 2020 are shaping up at the South Garda Karting circuit that is staging a great double event for Rounds 2&3. Heats will define the finalists among the 226 drivers that came from 34 different countries to battle out the titles of categories KZ2, OK, OKJ and MINI. The two categories OK and OKJ will also contest the Italian ACI Sport Championship.

The long marathon in Lonato has awarded the first points of Round 2 on Thursday, September 17th, to the best classified drivers at the end of the heats run on Wednesday and Thursday. Heats of Round 3, to be run from Friday to Saturday, will give some further points. The Finalists will run Prefinals on Saturday, while the grand finale will get underway on Sunday, September 20th.

Longhi leading KZ2.
Riccardo Longhi (BirelART/BirelART-TM Racing-Vega) had the upper hand so far in the second round of the WSK Euro Series 2020 as he won all 4 heats he competed in. Marijn Kremers on Ricciardo Kart-TM Racing of Team BirelART and Paolo Ippolito (CRG/CRG-TM Racing) claimed two wins, but the latter unfortunately scored also a DNF. One win went also to Matteo Viganò (Leclerc by Lennox/BirelART-TM Racing) and Giuseppe Palomba (BirelART/BirelART-TM Racing), who climbed the classification up thanks to his constancy of results. The provisional classification lead is held by Longhi, who is followed by Kremers and Palomba. The fourth place is occupied by Stan Pex (KR Motorsport/KR-TM Racing) and the fifth by Viganò.
KZ2 Qualifying Heats Rd2: 1. Longhi; 2. Kremers; 3. Palomba; 4. Pex Stan; 5. Viganò; 6. Iglesias; 7. Albanese; 8. Torsellini; 9. Denner; 10. Pex Jorrit.

Turney on top in OK, but keep an eye on Wharton.
An initial DNF penalizes a lot the classification of the Australian driver James Wharton (Parolin Racing/Parolin-TM Racing-LeCont) in the heats of OK, but he then claimed two wins despite being 11th in the provisional standings. The current leader is the poleman Joe Turney (Tony Kart Racing Team/Tony Kart-Vortex) who secured one win. He is followed by Juho Michael Valtanen (Pantano Team/KR-Iame), who also claimed one win, and Rafa Camara (Forza Racing/Exprit-TM Racing). Andrea Kimi Antonelli (KR Motorsport/KR-Iame) won one heat too and is fourth. Matheus Morgatto (BirelART/BirelArt-TM Racing) is currently fifth instead.
OK Qualifying Heats Rd2: 1. Turney; 2. Valtanen; 3. Camara; 4. Antonelli; 5. Morgatto; 6. Van Hoepen; 7. Revesz; 8. Wurz; 9. Paparo; 10. Bedrin.