The long challenge of WSK Euro Series has started in Lonato 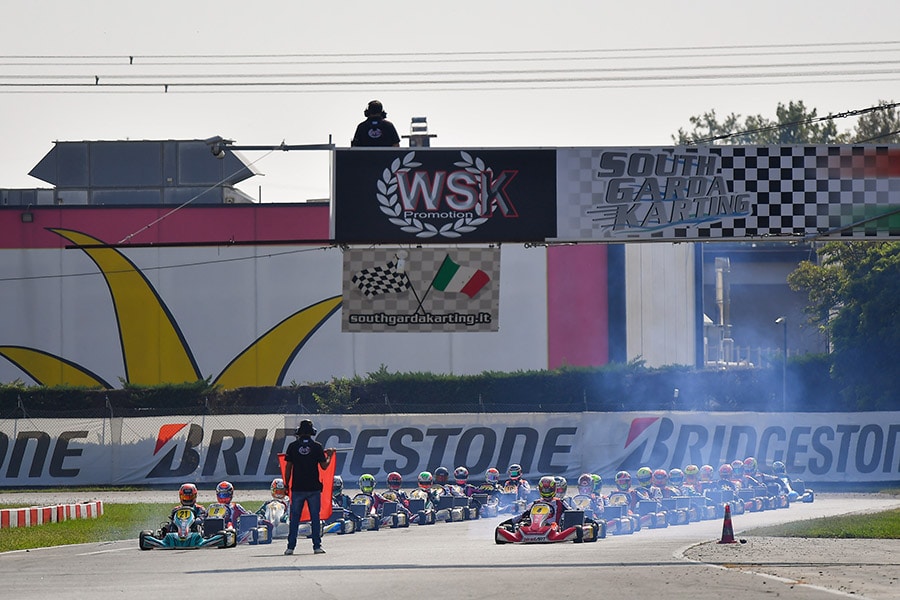 In the tenth year of WSK Euro Series, the championship will be decided by the double appointment of Round 2 and Round 3 for KZ2, OK, OKJ and MINI. Qualifying practice and the initial heats named the first protagonists for the titles hunt. The long final stages of the WSK Euro Series has kicked off at the South Garda Karting. The series will name the winners of the categories KZ2, OK, OKJ and MINI on Sunday, September 20th. The finals of Round 2 on Sunday morning will also award the ACI Sport Italian title for OK and OKJ. A total of 226 drivers successfully completed sporting and technical scrutineering in Lonato. Among these, an exceptional set of International Karting champions that will put in a splendid battle for the titles in the tenth year of the WSK Euro Series.

The pole positions in KZ2 to Kremers (Rd.2) and Albanese (Rd.3).
In KZ2 the Dutch Marijn Kremers of Team BirelART on Ricciardo Kart-TM Racing-Vega posted the pole position time in 45.638s and was followed by Riccardo Longhi (BirelART/BirelART-TM Racing) at 0.007s and by Giuseppe Palomba, who posted the quickest time in the second session in 45.687s. Danilo Albanese (KR Motorsport/KR-Iame) went quickest of round 3 in 45.694s and was followed again by Palomba in 45.712s, while Jeremy Iglesias (Formula K/Formula K-TM Racing) was the fastest of the second session in 45.791s. Mirko Torsellini (KR Motorsport/KR-Iame) was also among the quickest and completed his best lap in 45.725s.

Badoer and Ugochukwu to the fore in OK-Junior.
In OKJ the fastest of Round 2 was Brando Badoer (KR Motorsport/KR-Iame-Vega) in 47.594s, while Ugo Ugochukwu (Sauber Karting/KR-Iame) posted the best time of Round 3 in 47.688s. Harley Keeble (Tony Kart Racing Team/Tony Kart-Vortex) was also very fast in Round 2 as he completed his best loop in 47.666s and Arvid Lindblad (KR Motorsport/KA-Iame) in Round 3 (47.754s).

Bitter-sweet MINI for Nakamura in Round 2. Costoya strong in Round 3.
In the category reserved to the youngest drivers, Kean Nakamura-Berta (Team Driver/KA-Iame-Vega) turned out to be the quickest of Round 2 for MINI in 52.941s, but he could not repeat this result in qualifying of Round 3 and posted the 18th time. In this occasion, Christian Costoya Sanabria (CRG/CRG-TM Racing) posted the fastest time in 52.991s. Andres Cardenas (Energy Corse/Energy-TM Racing) was also very quick in Round 2 as he led the second session in 53.020s. Mark Kastelic (Team Driver/KR-Iame) went quickest in the second session of round 3 in 53.155s.

The initial qualifying heats.
After qualifying practice the program continued with the initial qualifying heats valid for Round 2 and some more will follow for the whole day on Thursday, September 17th.
The KZ2 victories went to Longhi (two wins), Ippolito and Kremers. In OK Tutney, Bedrin and Valtanen had the upper hand instead. Badoer (two wins) and Rinicella did the same in OKJ. The first wins of MINI went to Kastelic (two), Costoya and Nakamura.