Red-hot battle at the DKM kick-off in Kerpen

After a long wait, the German Kart Championship finally started again in Kerpen and a highlight was waiting right at the start. The traditional Erftlandring was the location of the first event of the season in an unusual season. The worldwide Corona-pandemic posed new challenges to the DKM and its grade series.

Start in compliance with security and hygiene-concept
The whole organizational team as well as the people responsible at the Kart-Club Kerpen e.V. in the ADAC put a lot of effort into getting the permit for the racing event during the past months and presented an extensive security- and hygiene-concept in Kerpen. Drivers and teams adjusted to it and therefore made the race a success. “We had a lot of discussions beforehand and tried to keep the processes as simple as possible. Looking back I can say that everything worked perfectly. A huge thank you goes to the organizers and the DKM team, who have put a lot of time and work into the success of this event. But I’d also like to thank the drivers and teams because everyone acted highly responsible and made for a great event”, DKM-series coordinator Stefan Wagner praised everyone involved.

In addition to the sportive challenges, the weather also pushed man and machine to their limits. Temperatures of almost 40°C called for high physical fitness. The only small cooling was provided on Sunday afternoon due to a small rain shower. The race winners Kris Haanen (DJKM), Kas Haverkort (DKM), Jorrit Pex, Fabian Federer (both DSKM) and Julian Müller (DSKC) coped with the conditions the best. 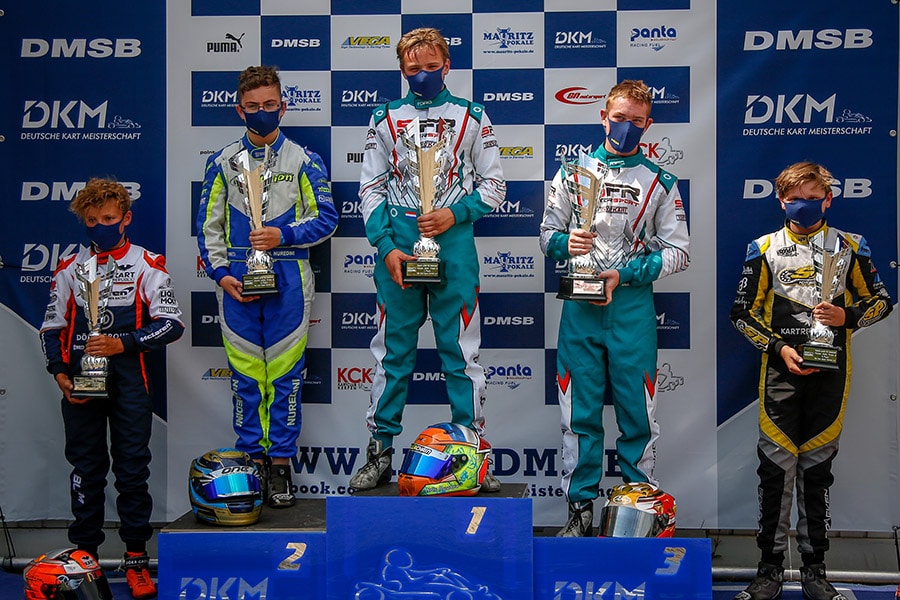 DJKM: Dutchman Kris Haanen wins twice
The racing Saturday was dominated by Herolind Nuredini (KSM Official Racing Team). In his first full season of the German Junior Kart Championship, the driver from Lower Saxony secured pole position for both heats. He was unstoppable during these as well: He achieved both victories and thereby the best starting position for the first final race on Sunday. He lost his top position early on during the race over 18 laps though. Kris Haanen (SFR Motorsport) drove past him and kept his pursuers at bay until the finish line. Behind the leading duo there was a narrow fight for the remaining places on the podium until the end of the race though. In the end, Daniel Guinchard (SFR Motorsport) came in third in front of Mathias Bjerre Jakobsen (RS Competition) and Kiano Blum (TB Racing Team). The latter was on third place for a long time, but lost two positions during the last laps.

After his victory at the first race, Haanen aimed for the double victory in the second final. But things didn’t go easy for him. In the beginning, he kept switching positions with his team mate Guinchard. In the end, he took back the lead and benefited from a duel of his opponents. “Our goal was to win here and it’s great that we’ve now done that. It wasn’t easy in both races, so I’d really like to thank my team who are a huge part of my success”, rejoiced the winner in his interview. Behind him, German Nuredini came out on top against Guinchard and came in second again. Fourth winner Kiano Blum experienced a lonely race. He gained his position early on and ended up in the cup ranks again. Things were a lot narrower in the fight for fifth place: Seven juniors fought for the position. In the end, Tom Braeken (SP Motorsport) came out on top. 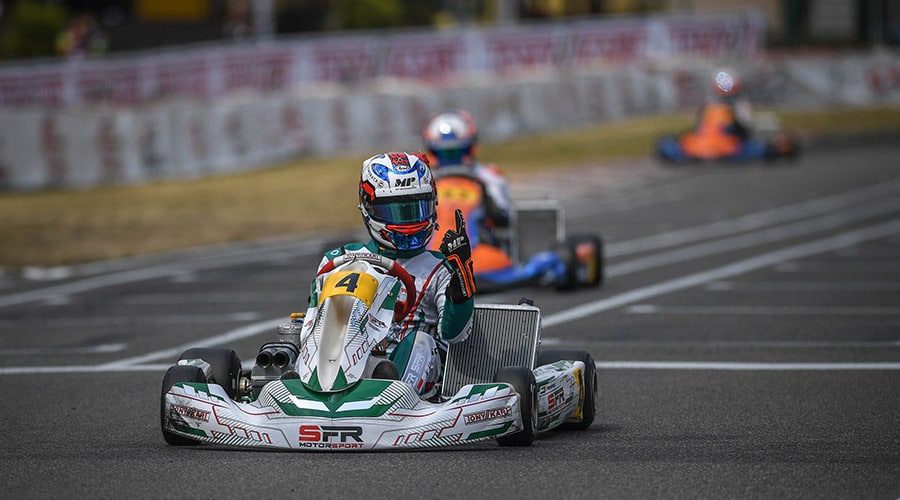 DKM: double victory for Kas Haverkort
Moritz Wiskirchen (TB Racing Team) caused the first surprise of the year on his home track. He kept all opponents at bay during qualifying and the heats and secured pole position for the race on Sunday morning. He highlighted that his success the previous day was not just a flash in the pan during the first final race. He set the pace at the front of the field until shortly before the end of the race. He didn’t win though. The Junior Champion 2017 Kas Haverkort (SFR Motorsport) found a way past him and won in front of Wiskirchen. The best rookie Daniel Gregor (Junior Team75 Bernhard) followed on third place. Another junior rookie took fourth place: Fabio Rauer (KSM Official Racing Team). A spoiler penalty threw him back in the end though. New fourth driver was Emil Tanggard (HK Motorsport) in front of Luca Griggs (SFR Motorsport). Unlucky drivers of the race were Juliano Holzem (SFR Motorsport) and Niels Tröger (Mach1 Motorsport). Both of them had to end the race prematurely on a top three position.

Haverkort set the pace from pole position during the second race. Throughout the entire race he kept a safe distance to his opponents and rejoiced about his well-deserved double victory in the winner’s interview: “I was asked by my team if I wanted to start quite late and therefore only had a few tests. I’m very happy that things went so well and I won.” Behind the Tony Kart driver things were quite dramatic. Numerous drivers had to forfeit the race due to technical defects, among them fastest driver of qualifying Wiskirchen. TB Racing-duo Juho Valtanen and Ben Dörr drove the races very securely though. Both fought their ways forward after bad luck on Saturday and completed the top three. Just like in the first race, Gregor and Griggs ended up in the cup ranks. 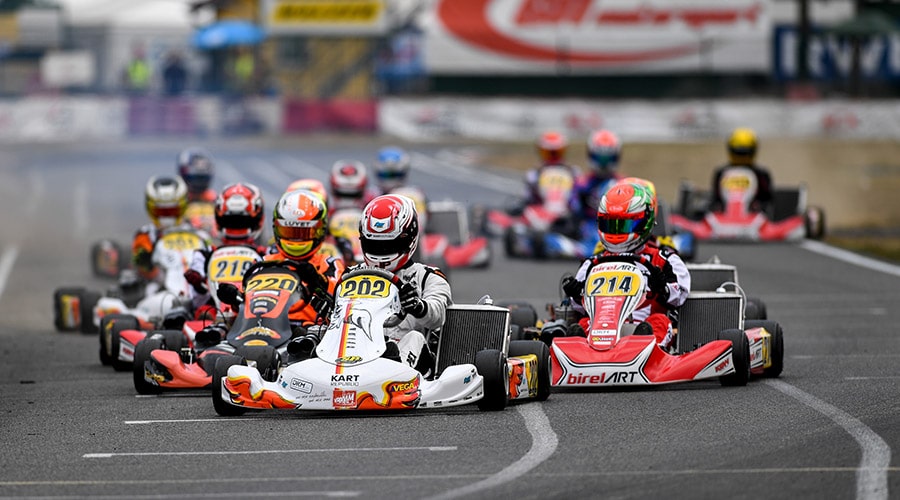 DSKM: Former champions Pex and Federer successful
At the German Shifterkart Championship, this year’s motto is quality over quantity. Even though only 13 drivers are starting, the list of participants reads like a who-is-who of shifterkart racing. With Jorrit and Stan Pex (both SP Motorsport), Fabian Federer (SRP Racing Team) and Alexander Schmitz (BirelART Racing KSW), four DSKM-champions are participating. The first best time of the year went to one of these drivers: Federer. During the following heats, Jorrit Pex took the lead though. The Dutchman and six-time DSKM-champion led the field during the first final from the start. In the end, his Swiss pursuer Lean Luyet (CRG Holland) came close, but couldn’t find a way to attack. DSKC-winner David Trefilov (SRP Racing Team) achieved a perfect entry by coming in third. A subsequent spoiler penalty lost him two places though. New third winner was Valentino Fritsch (BirelART Racing KSW) in front of reigning champion Stan Pex.

There was a new balance of power during the second race then. Stan Pex got off to a fast start and raced to the front of the field. From the field of pursuers, Federer worked his way forward and took the lead after only five laps. He kept it until the end of the race. Behind him, Stan Pex had to drop out of the race shortly before the end and gave his second place to his brother Jorrit. Closely behind the Dutchman was Schmitz, who achieved the jump onto the podium after a falling out during the first race. The fight for fourth place was narrow: Numerous drivers were closely together. While Luyet and Fritsch drove into the top five, Trefilov was the victim – he had to drop out of the race due to a collision in the last bend. Winner Federer is now looking forward to the upcoming races after his bad luck during the first race: “Things can go on like they did during the second race. We had a lot of bad luck during the weekend as well though, otherwise more would’ve been possible. We always work hard as a team to have an advantage in this narrow field.”

DSKC: Julian Müller achieves German victory
At the DMSB Shifterkart-Cup, the cards were dealt completely anew. The top five of last year rose to the DSKM and made way for new favorites. One of these was Coen Doorn (A.K. Doorn) – the Dutchman was fastest driver of qualifying. But Julian Müller (Mach1 Motorsport) made himself known again during the heats. He took the lead on his home track on Saturday evening.

The field was split into two groups again for the pre-final. The victories went to Müller and rookie Simon Connor Primm (Valier Motorsport) – they therefore made up the front row of the final race. Just like in the previous races, Müller won the start and didn’t give the competition any chance to attack. He wasn’t fazed by rain during the race either and achieved a safe victory. “This was not an easy race. As the leading driver it was difficult to find the right brake point in the light rain. You had no clue. After the narrowly missed title in 2017, I want to achieve my goal this year”, the Rhinelander summed up his kick-off.

Behind the Cologne resident, the drivers were very closely together and there were a lot of position changes up until the end of the race. Toni Greif (Solgat Motorsport) passed by Primm and came in second. But both of them received a penalty due to false starts and fell back. Another newcomer ended up on second place: Jonas Ried (Solgat Motorsport). Third place went to Karl Lukaschewsky (SRP Racing Team), followed by Doorn and Jesse Smeets.