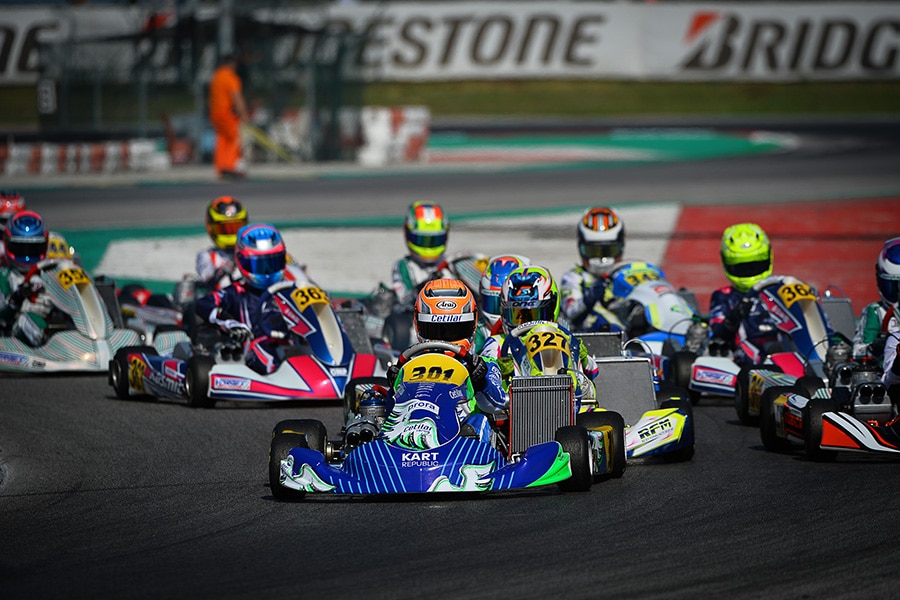 After the first two qualifying days, the third round of WSK Super Master Series completed its qualifying at the Adria Karting Raceway. The program of this long karting week in Adria will continue on Thursday and Friday with the qualifying of round four, while on Saturday round three will run its finals and the first series by WSK Promotion will reach its conclusion on Sunday with the finals of round four.
More than 180 drivers reached Adria for this double event open to categories KZ2, OK, OKJ and MINI.

Badoer, the ruler of OKJ
In OK Junior, the category reserved to the young emerging talents, Brando Badoer (KR Motorsport/KR-Iame-Vega), the son of former F1 driver Luca Badoer, came to the fore in qualifying before rounding his result off in the heats claiming four wins in four races. His main rival so far has been teammate from Britain Arvid Lindblad, who is the current classification leader. The Pole Karol Pasiewicz (Tony Kart Racing Team/Tony Kart-Vortex-Vega) and the other Badoer’s teammate Ugo Ugochukwu also put in a strong qualifying but were both penalized by a contact in the closing heat. The other Pole Tymoteusz Kucharczyk (BirelArt Racing/RK-TM Racing-Vega) also showed a good pace.
OKJ classification after heats: 1. Badoer; 2. Pasiewicz; 3. Kucharczyk; 4. Rinicella; 5. Irfan; 6. Lindblad; 7. Ugochukwu; 8. Cepil; 9. Dodds; 10. Gubenko.

Mini quite open
A great spectacle has been put on by the MINI drivers once again. The Russian Dmitry Matveev (Energy Corse/Energy-TM Racing-Vega) secured three wins as the Japanese Kean Nakamura Berta (Team Driver Racing Kart/KR-Iame-Vega), who completed some good comebacks but was penalized by an incident with the other protagonist from Poland Jan Przyrowsky (AV Racing/Parolin-TM Racing-Vega) – who also claimed two wins – when the two were fighting for the win. The Australian Griffin Peebles (AV Racing/Parolin-TM racing-Vega) was also among the quickest on track.
MINI classification after heats: 1. Matveev; 2. Peebles; 3. Lammers; 4. Kastelic; 5. Nijs; 6. Gladysz; 7. Prztrowsky; 8. Josseron; 9. Nakamura; 10. Monza.

The program will continue on Thursday, July 2nd with qualifying practice and heats of Round 4.

Find out the impact of Covid-19 on the nervous system