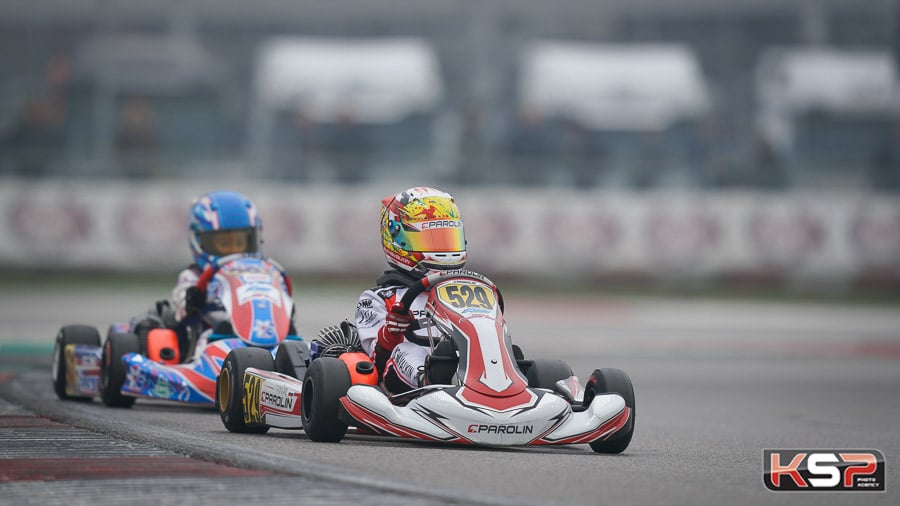 The weather was foggy but dry at Adria for the WSK Super Master Series Mini Prefinals.

Kean Berta Nakamura (KR/Iame) made the best at the start of Prefinal A, but German Foteev (Energy/TM) took the lead before Gerasim Skulanov (IPK/TM) passed him. Rashid Al Dhaheri (Parolin/TM) was back in 4th position ahead of Jimmy Helias (Tony Kart/Vortex). Guillaume Bouzar (Parolin/TM) lost ground in the top 10 after running 4th, Jules Caranta (Tony Kart/Vortex) was fighting in the top 20 while Thomas Quincé (Parolin/TM) closed the gap. The battle raged in the top three of Skulanov, Foteev and Nakamura. However, it was the driver Japanese Nakamura who narrowly defeated Skulanov and Foteev. Al Dhaheri finished 4th, Helias 5th. Caranta was unable to qualify with his 18th position and Quincé remained in 32nd place after Bouzar’s retirement on the penultimate lap.

Anatoly Khavalkin (Parolin/TM) kept the advantage at the start of Prefinal B while Dmitry Matveev (Energy/TM) was in second place ahead of Marcus Saeter (Energy/TM), Kai Sorensen (Tony Kart/Vortex) and Jindrish Pesl (Parolin/TM). Clément Outran (Energy/TM) dropped eight places to 18th. Jan Przyrowsky (Parolin/TM) retired, while Matveev took 1st place in front of Khavalkin. Pesl was 3rd by 1.5”, now followed by Yampu Cui (Tony Kart/TM). Outran quickly recovered his starting position in the top 10. Khavalkin did not let go of the leader and attacked on the last lap. Matveev replied, then tackled Khavalkin to cross the finish line as the winner, but he was penalised and finished 4th. Victory went to Khavalkin alone with Pesl far ahead of Saeter. Sorensen finished 5th and Outran qualified 10th.