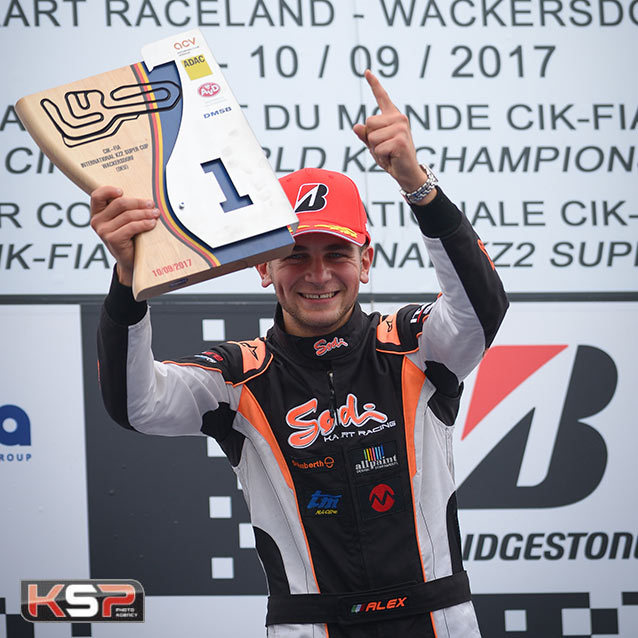 The Driver who called himself “Alex” after his karting debut completed a magnificent season in KZ2 in 2017. Recruited by the Sodikart factory as an Official Driver, Alessandro Irlando has shown his talents very convincingly in various situations. Already on the podium of the CIK-FIA European Championship at just 17 years old, he was awarded the top prize by winning the CIK-FIA International Super Cup at Wackersdorf (DEU). Two weeks later, he participated in the Le Mans 24 Hours Karting and actively contributed to the 3rd place for his team in the CIK-FIA Endurance Championship.

Alessandro, how did your story start in Karting?

– My father is a Hillclimb Driver, in Italy and at the European level. He passed on his passion and allowed me to drive a kart at the age of three. I took part in my first Competition at seven years old. I then raced in 60 Mini, then I competed in two full seasons in KF-Junior. One of my best memories is my victory in the Rotax Max Challenge Grand Finals at Portimao in 2015 in Senior Max. I then went straight into KZ2.

– I was able to race in good conditions thanks to the Sodikart factory. The European Championship had started well and I still had every chance of winning the title in Sweden, but the very complex conditions of the Final on slick tyres in the rain meant I had to settle for the podium. For the International Super Cup, everything was in place. I could have taken five wins in the six Qualifying Heats if I hadn’t a penalty in the last one. The Final was tough, but I was able to climb quickly from 6th to 2nd position. I stayed in the leader’s wheeltracks for a long time because overtaking is difficult on the Wackersdorf track. I tried everything at the last corner, the manoeuvre was successful and I won by 49 thousandths of a second!

– It’s endurance, the WEC, that makes me dream more than Formula 1, because this beautiful discipline seems to be more accessible. I do not know how long I will continue in Karting, but I would be very happy to be able to race in KZ next year. It must be an incredible experience.