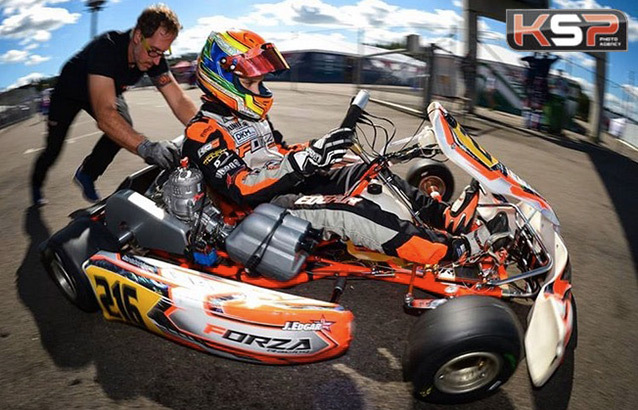 The 2017 CIK-FIA European Junior Champion is a young 13-year-old British Driver this year competing in his first international season. Jonny Edgar was immersed in passion for Karting thanks to an incredible family, competing for three generations. The undisputed leader in OK-Junior, Jonny has revealed a fighting spirit whose perseverance is not his least quality. Very mature for his age, he also has an amazing understanding of race strategy. The true revelation of the season, Jonny will be a Driver to follow in the years to come.

Jonny, can you explain your attraction to Karting?

– My family has been passionate about Karting for a very long time. My grandfather and my grandmother were already racing, my uncle, my father, my mother, and my cousins ??too. At home, karting is part of everyday life. I started at the age of three on a Bambino and I won races in my area from eight years old. I raced a lot in different British Championships and won several titles.

How did you first experience International Competition?

– It was my first year in OK-Junior. I wanted to stay with a British team, because I know and appreciate this way of approaching racing. The choice was Forza Racing: on the one hand Jamie Croxford used to race with my father and on the other hand the preparation of TM Racing engines by GFR was an important element. The first races in Italy were not easy, while I was adapting to my new category. From the first round of the European Championship, everything started to work for me.

How did the winning of the European title take place?

– I got my first win at Sarno (ITA), which was a good sign. I was still in the lead at Oviedo (ESP), but a front fairing penalty dropped me down. I was on the podium at Le Mans (FRA) and I won again at Alalhärmä (FIN). Despite difficult conditions, I finished 2nd at Kristianstad (SWE) and won my first European Championship. So yes, I can say that I had a good season!

Do you have specific ambitions?

– Like many young Drivers, I am thinking of cars, but I still have time. I will be able to stay in Karting a little longer and move to the next category, OK, next year. It will be a new and very interesting challenge.