The Winter Cup of Lonato climbing up to 330 drivers

Remarkable numbers have been scored by KZ2 that will count around 100 drivers! The other categories are quite packed too: OK will have 70 drivers at the start, OK-Junior 90 and Rok Mini 72. OK-Junior and Mini Rok reached their maximum limit of drivers, and in these categories a lot of drivers are unfortunately in the waiting lists. The 326 drivers currently entered in the Winter Cup are on the second place in the history of the race that started back in 1996. The absolute presence record was set in 2000 with 368 entered drivers. 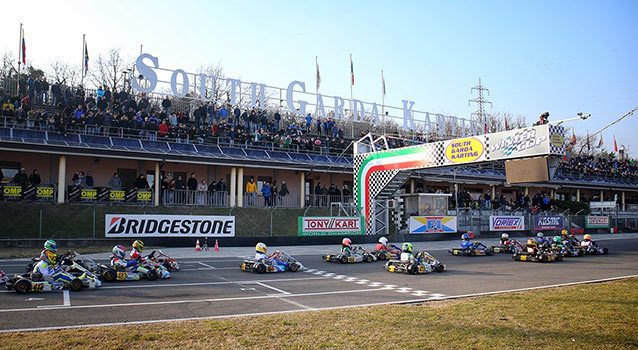 The champions present in OK will be led by 2016 World Champion Pedro Hiltbrand (CRG-Tm), 2013 World Champion Tom Joyner (Sodi-Tm) and by Forza Racing’s new World Champion of Junior Dexter Patterson and European Champion of Junior Jonny Edgar. A lot of other drivers will get to the start with good chances too, as David Vidales (Tony Kart-Vortex), Hannes Janker (KR-Parilla), Lorenzo Travisanutto (KR-Parilla), Callum Bradshaw (CRG-Tm) and Nicklas Nielsen (Tony Kart-Vortex). They are all very quick and can definitely aim to the victory.

Eyes on emerging talents of Junior
OK-Junior will bring a lot of emerging youngsters to the Winter Cup. Among these, Vice-European Champion of Junior Harry Thompson (FA-Vortex), team Ward Racing’s drivers led by Kiril Smal (Tony Kart-Vortex), Gabriel Bortoleto (CRG-Tm), and the surprising Gabriele Minì (Parolin-Iame), who is already up there ready to fight for the win in his maiden year in Junior. Among the main protagonists, team Ricky Flinn’s drivers Paul Aron and Zak O’Sullivan will both compete on FA-Vortex. Some sons of famous drivers will also be present as Enzo Trulli (son of former F1 driver Jarno Trulli) on CRG-Tm and Sebastian Montoya (son of F1 driver Juan Pablo Montoya) on Tony Kart-Vortex.

Mini Rok full of promising youngsters
Mini Rok is the category reserved to the very young drivers. The challenge to the victory here is more open than elsewhere and the win is often decided by a photo-finish sprint to the line. Among the 72 young drivers entered in the Winter Cup of Lonato, Martinius Stenshorne (Parolin-Tm) has good chances, but also Brando Badoer (son of former F1 driver Luca Badoer) and Andrea Kimi Antonelli (son of former driver and current team manager Marco Antonelli).

“Super Heats” are back!

The 23rd Winter Cup confirms what tested last year. The final stages of Sunday February 18th will feature Super Heats, two races for each category (max 34 drivers per heat) that will give additional points after qualifying heats to define the 34 drivers that will take part in each Final.

All categories will employ Bridgestone tyres. Tyres check will be done through barcode tagging and scanning. The fuel used will be Tamoil 100% octanes.