Every year, the FIA Women in Motor Sport Commission supports the participation of a young female in this Trophy. In 2017, the 12-year-old Colombian Valeria Vargas Garcia was chosen because of her motivation and the promising results of her career in karting which had started six years ago. Very comfortable to communicate and always able to be positive, Valeria summarises the results of her season. 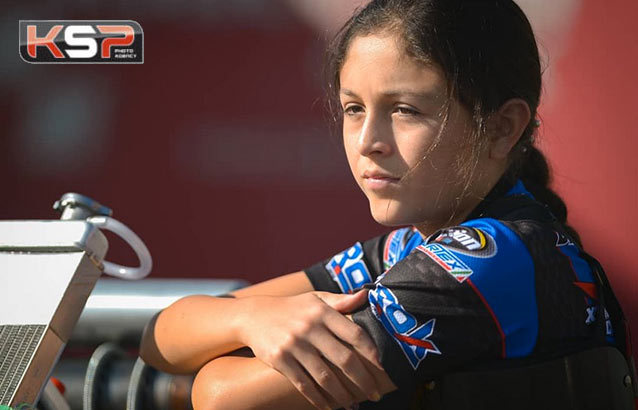 “It has been a great opportunity for me to be chosen by the Women in Motor Sport Commission and to represent my country, Colombia. I am aware of how lucky I was to compete in the 2017 CIK-FIA Karting Academy Trophy. The Competition has always been very well-organised and the karts available to us were excellent. The combination of the efficiency of the Exprit chassis, the power of the Vortex DDJ engine and the grip of the Bridgestone tyre allowed me to discover another world.

“The Competition was very tough at the three circuits of the Trophy. I had to try to be fast to get back into the race, without crashing and without being penalised, especially for the front fairing, which was not always the case. I achieved my best performance in Qualifying Practice at Genk (BEL) with 23rd out of the 49 Drivers. I managed two beautiful races out of the three, but I moved my front fairing each time. I was out of the running during the Le Mans Qualifying (FRA), but I gained ground in two of the three Heats. I also came back at Alahärmä (FIN) before having to give up in the third Heat.

I did not think the standard was too high. Everything is very different from what I have known in Colombia: circuits, equipment and also competitors. In any case, this season in Academy was a very rewarding experience for me and I learned a lot during this first year in Europe. I hope I can use all of this in the near future. I would very much like, with the support of my family, to be able to compete for the entire European Junior Championship next year, because I am convinced that this is where you need to be to become a good Driver.”