The Adria track had dried up well, but there were still wet areas off the line for a few laps when the OKs came on the scene. 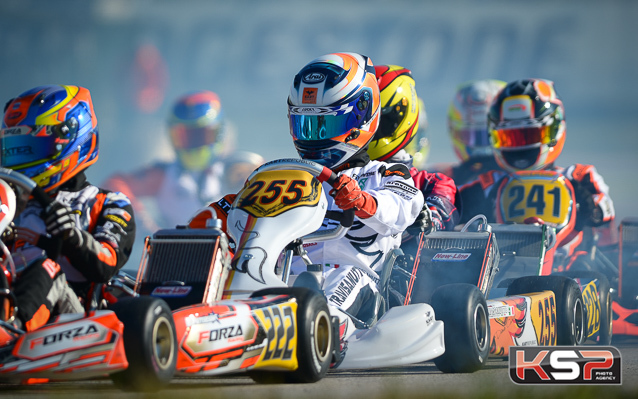 David Vidales Ajenjo (Tony Kart / Vortex) and Noah Milell (Tony Kart / Vortex) started at the head of Prefinal B, Lorenzo Travisanutto (KR / Parilla) dropped to 3rd position ahead of Dexter Patterson (Exprit / Vortex). The Briton then lost places over the laps. Milell got the better of Vidales in the lead of the race, Travisanutto seized 2nd position ahead of the Spaniard soon after. After an excellent start to the race, Pedro Hiltbrand (CRG / TM) came 3rd to Vidales, but let Roman Stanek (Kosmic / Vortex) pass. Tom Joyner (Sodi / TM) accelerated after the halfway mark and reached 6th position, while Andrea Rosso (CRG / Parilla) gave up. Travisanutto started the last lap in 1st position and won against Milell, Vidales finished 3rd ahead of Stanek and Hiltbrand. Leonardo Marseglia, 6th, was ahead of Joyner on the line.