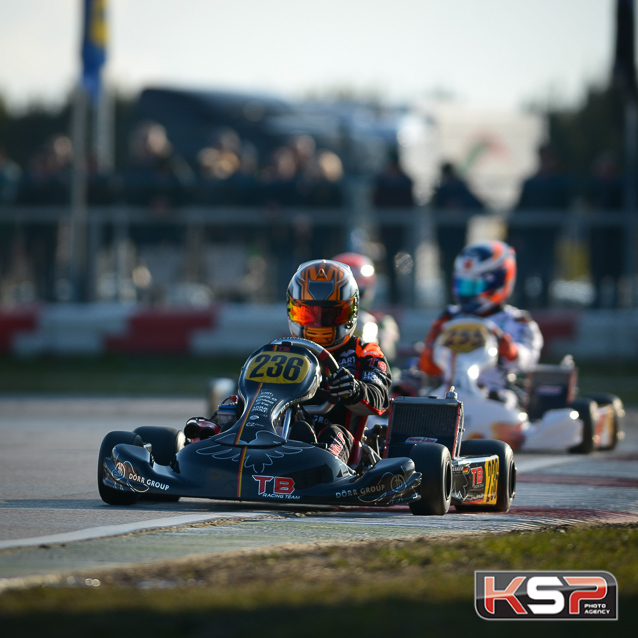 Lorenzo Travisanutto (KR / Parilla) retained his 1st place at the start of the OK Final of the WSK Super Master Series at Adria, but David Vidales Ajenjo (Tony Kart / Vortex) did not let go and went on the attack from the third lap. Nicklas Nielsen (Tony Kart / Vortex) was 4th behind Hannes Janker (KR / Parilla), followed by Roman Stanek (Kosmic / Vortex) and Pedro Hiltbrand (CRG / TM) who overtook Jonny Edgar (Exprit / TM). Vincent Fraïsse (Sodi / TM) did not seem to have the speed to take off from his 18th position. The three leading men remained very close and Travisanutto took control under braking at the hairpin at halfway. Janker followed the Italian in 2nd position on the next lap, while Nielsen was preparing to join the trio in the middle of a fight. The Dane took the advantage over the Spaniard in his stride to take 3rd place.

Janker then took the lead, Vidales was slightly off the hook, while Lorenzo Ferrari (Exprit / Vortex) was in the top five after overtaking Stanek. The TB Racing driver Janker was heading for a great victory by controlling Travisanutto, setting the fastest time on the last lap. Nielsen was no longer able to come back and worry his rivals and finished 3rd. Vidales took 4th place and Ferrari 5th in front of Hiltbrand. The two Sodi / TM drivers, Tom Joyner and Vincent Fraïsse, who started the development phase of their equipment here, were ranked 16th and 17th.