Puhakka remains leader in KZ2 after the heats 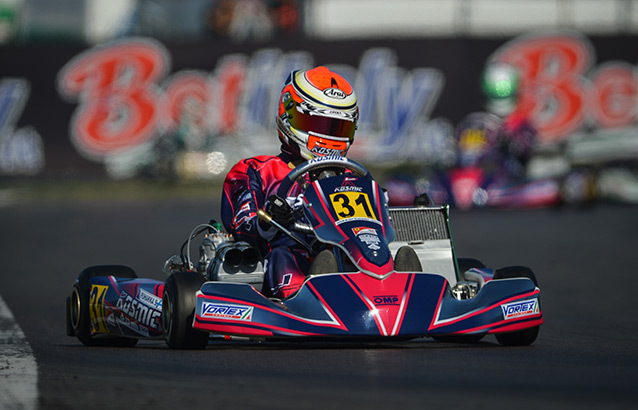 Despite the tremendous intensity of the struggles in the KZ2 category, Simo Puhakka managed to maintain his lead at the end of the qualifying heats of the WSK Super Master at Sarno, thanks to his two victories. The factory Kosmic / Vortexes were performing very well, as evidenced by Patrik Hajek’s 4th position, after an 8th and a win. Once again, Jérémy Iglesias (Formula K / TM) took 2nd place ahead of Bas Lammers (Sodi / TM), very consistent in the top three. The Sodi / TMs are in the hunt, Anthony Abbasse having succeeded in returning from 20th to 7th position and Tom Leuillet having made sparks, 15th despite an engine breakdown. Lorenzo Camplese (Parolin / TM) was both fast and steady in the lead group, which allowed him to take 5th with good potential. Let’s not forget Marco Ardigo (Tony Kart / Vortex) who is only 12th because of a retirement, but still winning two races.

Pierre Loubère (Zanardi / Parilla) had a little trouble, dropping from 15th to 32nd place as the only Parilla engine driver. Adrien Renaudin (Sodi / TM) is pleased to have progressed from 42nd to 33rd place, while Paul Fontaine (Sodi / TM) followed a similar evolution from 45th to 38th.