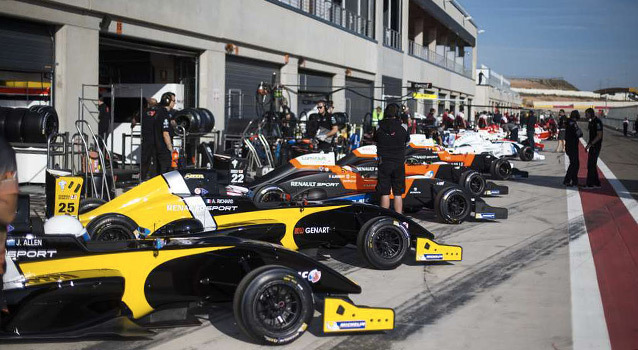 The drivers in Group A were first out on the track, with Tech 1 Racing duo Hugo de Sadeleer and Simon Gachet setting the early pace before being dislodged from the top of the timesheets by Kevin Jörg and Matevos Isaakyan. The situation remained unchanged until the dying seconds of the session, when Ben Barnicoat posted a time of 1:55.964 to relegate the Swiss and the Russian to second and third respectively.

Louis Delétraz was the first driver to dip under Ben Barnicoat’s time when the second group went out. The son of former Formula One driver Jean-Denis Delétraz, the Swiss stopped the clock at 1:55.766 to secure pole for race one ahead of Dennis Olsen and Anthoine Hubert. As the end of the session neared, he went out and bettered his second-fastest lap to book top spot on the grid for race two.

Louis Delétraz : “It’s the perfect start. I wanted to be on pole for both races and I’m delighted things turned out that way. We’ve worked hard. Testing went well for us and we backed it all up this morning. I’m hoping to now go and make a good start. It’s an important part of the battle because it’s not easy to get past people here.”