Two pole positions, two wins, two fastest times of the race and the provisional overall leader, is the assessment of Giuliano Alesi after the opening round of the French F4 Championship held at Lédenon. 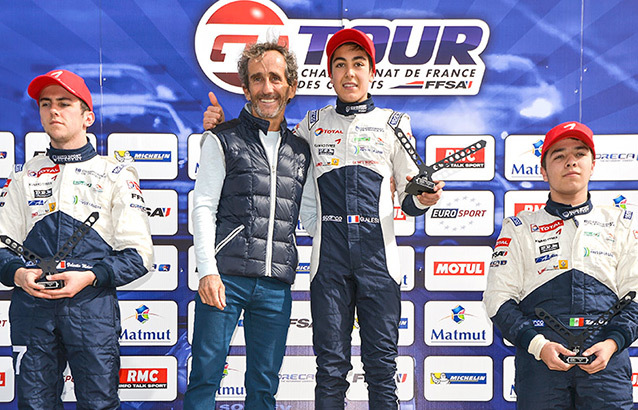 For the first race of the weekend, Giuliano made an excellent start from pole position and therefore very quickly built a gap with his closest pursuers thanks to his best lap in the race, before flying to his first victory for his first race in a car.
The second race was less significant for Giuliano who was the victim of a collision on the first lap which forced him to give up.
The weather was diabolical on Sunday’s last race. From pole position, Giuliano Alesi made a slow start but quickly resumed command of the race, never to leave it. Imposing a very high speed on all of his opponents, Giuliano was up to eight seconds in the lead after only four race laps. As the laps went on the rain intensified on the track which was made impassable, forcing the race direction to put out the red flag. Always the master of his subject in such delicate circumstances, Giuliano Alesi took his second win on home soil and in front of the many fans and supporters from Avignon.
Overall, logically Giuliano Alesi is leading the championship and is now focusing on the next meeting to be held at the Le Mans Bugatti circuit on 1st, 2nd and 3rd May

Giuliano Alesi: “From a general point of view, I am very satisfied with my first race weekend and my level of performance. The work this winter has paid off, but I still have a lot to improve on with number of points that I identified throughout my weekend. I’m a little disappointed with Race 2 retirement because I would have loved to fight with all of my competitors.
Now my focus is on the next round at Le Mans where I will prepare in the best ways possible in order to perform well.“