With five KF and five KF-Junior drivers make up the French delegation at the first of four rounds of the 2014 CIK-FIA European Championship. Apart from their levels, there are big differences between them as to preparation that may have happened since the start of the season, some have already competed in a half a dozen international races to date, and the others haven’t. While the free practice of the Italian competition is under way, here’s a quick overview of the country’s talents.

In KF, based on results it’s logical for hopes to rest on Gabriel Aubry (Tony Kart / Vortex) and Julien Darras (Kosmic / Vortex) who have often been at the top of the rankings this year. They are almost perfectly on the pace, running between one and two tenths slower than the fastest. Still faithful to the Kartronix International team, Paolo Besancenez (Tony Kart / TM) competed in the Winter Cup and one of the WSK Champions Cup events at La Conca in March with a very encouraging result. His times are steadily improving, and culminated on Friday morning at 3/10 off the best. It’s the first year for Nicolas Gonzales (Tony Kart / Parilla) after his victory in the IAME final at Lyon in October. He has a deficit of a little more than 4/10 from the leaders. Remaining with VDK Racing, Alexandre Gadois (FA Kart / Parilla) us participating in his first European Championship in this category after four Winter Cups and a European KF3 round at Varennes in 2011. His times are still a way from the leaders by about 1”. 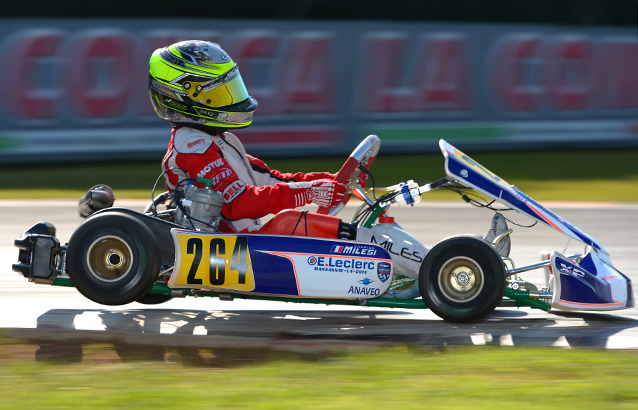 KF-Junior is especially expected to be a good warmup for the French drivers. Now used to international races, Giuliano Alesi (Tony Kart / TM) perhaps doesn’t have all the cards in hand to achieve the best results. At the moment he is 4/10 off the leaders. Charles Milesi (Tony Kart / Parilla), pictured above, working with Renato Merlin and Xavier Pompidou, and has consistently been within 2/10 of the best in free practice. Jules Bollier (Tony Kart / Parilla), at Ideal Kart, had the chance to work on the La Conca track at the WSK Super Master with good progression that led him to 13th place in the final. He is currently 4/10 off the best, but we can count on his sense of attack during the races. Tom Leuillet (Birel / TM) has hardly raced this year, participating only in the Margutti Trophy. He is learning the circuit and is approximately 7/10 from the front. Finally, the courageous Alessandro Brozzoni (Energy / TM), the least experienced of the group, who has raced at Lonato in the Winter Cup. He is currently a second off the fastest.