In the first year of homologation for Praga chassis and for its Racing Team, there is already a first world title! By winning the World Cup for KZ1 at Sarno, Bas Lammers has written the first chapter of an incredible success story.

Behind the wheel of a Praga, with a Parilla engine prepared by Tec-Sav, Lammers raised the pace throughout the weekend at Sarno against the best drivers in karting. The Dutch champion set the 10th time in timed qualifying and put in an excellent performance in the qualifying heats, showing his potential with a series of quickest laps. He was third at the start of the decisive final race, but he did not have to wait long to take the lead, which he kept right up to the finish line. Crowned for the second time at this level, Lammers gave Praga its first major victory with this World Cup. 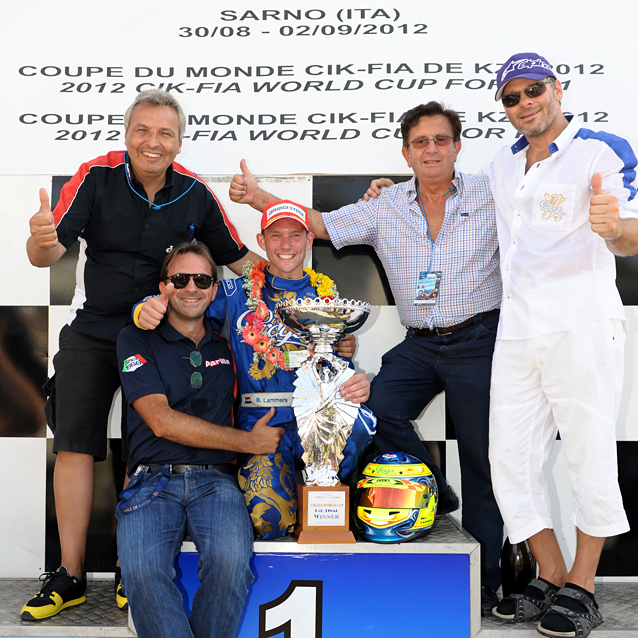 But Praga’s triumph was not limited to a single driver, because the brand saw two more of its chassis finish in the top 10. Patrik Hajek completed the success of the official team by ending 6th after a high level of performance. Performances shown by Alessandro Giulietti (Praga/TM) provided a perfect example of Praga’ strength, which allowed a private driver to outperform some of the best drivers, starting with a 5th time in timed qualifying and concluding the competition with an 8th place, alone among all the factory drivers. In KZ2, where the number of drivers who choose Praga chassis is constantly growing, it was the Czech Adam Janous who achieved the best results by climbing up from 20th to 12th during the final, while Martin Doubek was down on luck.