During the La Conca weekend marked by hot weather, much rubber on the track and bad luck, Jorrit Pex achieved two good results for CRG in KZ1, and is now leader of the WSK Euro Series classification, with one round to go in Spain in early August. CRG Racing Team drivers showed some good performances in the other classes too, but failed to win in the final phases. 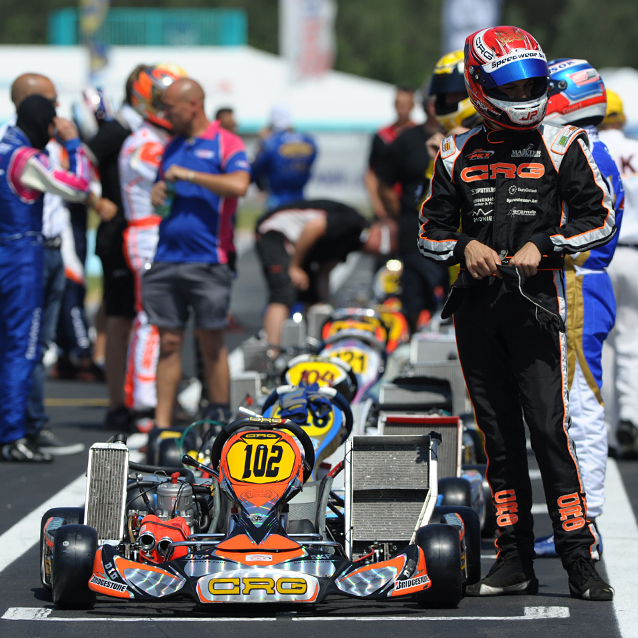 Already well placed on Saturday, when he was still adding the finishing touches to his CRG/TM adjustments, Jorrit Pex climbed onto the second step of the podium. On Sunday, the Dutch driver took every opportunity to get closer to leadership and won the heats and then the final. After a brilliant beginning of season, Jorrit is current championship leader, with high hopes to finish in beauty at Zuera. The other team members lost positions due to tyre and engine problems.

In KZ2, Jordon Lennox-Lamb (CRG/Maxter) was again the fastest. Everything went smoothly the first day, with pole position and victory in Final 1. The Briton was aiming for yet another success the following day, but after a series of collisions on the first lap of Final 2, he was forced to withdraw. Luckily he is still very well placed in the race for the title in Spain.

After starting far back during the qualifying heats in KF2, Felice Tiene (CRG/BMB) brilliantly climbed up to 4th, thus proving his competitiveness and that of his kart in the hot weather of La Conca. After a technical problem during the pre-final and a collision in the final, he was out from the fight for victory. Alex Palou (CRG/BMB) was not any luckier in KF3. After a pole in timed qualifying and a second place in his pre-final, the Spaniard could have aimed for another victory, but a difficult start in the final race forced him to give up. Thanks to his lead in the classification, though, he maintains the championship leadership.

CRG: the importance of the mind for a driver

CRG is thinking of you!

Work in progress for the CRG Racing Team