A major classical CIK-FIA event, the Viking Trophy was organised at the weekend in Finland on the circuit of Pori. Competition reserved for Drivers from Northern European and Baltic countries as well as Russia, the Viking Trophy has enabled Finland’s Jussi Kuusiniemi (KF2) and Henri Kokko (KZ2), but also Russia’s Nikita Sitnikov (KF3), to win a maiden title in a CIK-FIA competition. 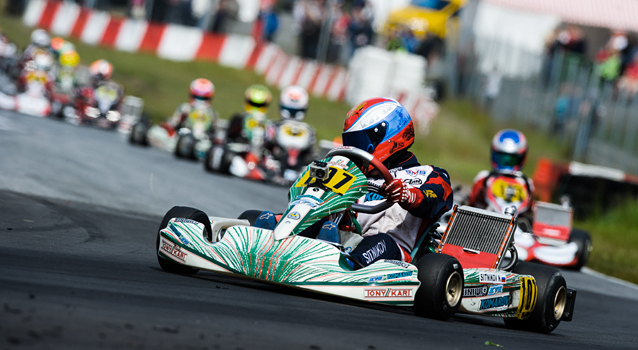 The category with the largest number of entries and often with the fiercest fights, the KF3 class offered its share of spectacle in Finland. Although the author of the fastest Qualifying Practice lap-time on Saturday, Nikita Sitnikov (Tony Kart-BMB), indeed landed on Sunday the Final of this Junior class (13-15 year-olds), it was all but a bed of roses. Delayed in the third Qualifying Heat held on a damp track, the Russian was only 7th in the Intermediary Classification. He gained two positions in the Prefinal, while he was very careful in preserving his tyres… and in booking a place for himself on the inside line at the start of the Final. In this decisive race, Nikita Sitnikov showed fine maturity by catching up his opponents one by one to take the lead shortly before the middle of the race. From then on, the Russian proved unassailable and took the best win of his young career.

Nikita Sitnikov’s success was perhaps facilitated by the troubles suffered by both his main rivals. In the lead further to the Qualifying Heats the Finn Tuomas Haapalainen (ART GP-Parilla) lost all his hopes in a Prefinal collision. Only 32nd on the starting grid of the Final, he recovered to 6th place. As a consolation he received the Lotta Hellberg Trophy (in memory of this late lamented very high-level female Driver), awarded to the Driver who has made the finest recovery in the Final. Tuomas could however have some regrets… Another prominent Finn, Valtteri Semi (Tony Kart-Vortex), was not any more successful as brake issues forced him to retire in spite of having won the Prefinal.

The Finn Aatu Moilanen (Haase Corsa-Vortex) subsequently prevailed ahead of Russia’s Dmitriy Stanishevskiy (Tony Kart-BMB), who made a good recovery from his 9th grid position to finish runner-up. When fighting for the podium, Finland’s Simo Laaksonen (ART GP-Parilla) and Jonas Lappalainen (Ninar-Vortex) collided on the last lap, and the latter was excluded for having caused the accident. They therefore left the other honorific positions to two other local competitors, Timi Tolvanen (Tony Kart-Vortex) and Olli Peltola (ART GP-Parilla). 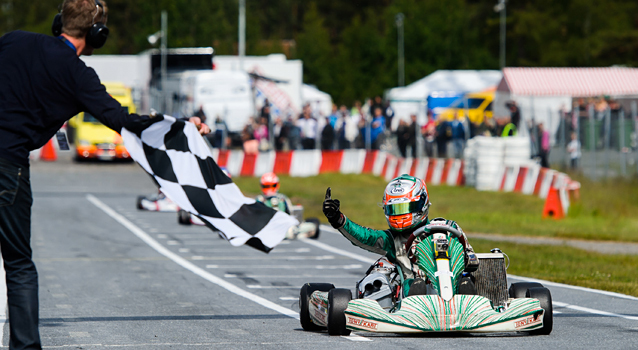 Jussi Kuusiniemi (Tony Kart-Vortex) certainly did not steal his victory in KF2 in this 2012 edition of the Viking Trophy. With the best Qualifying Practice lap-time and wins in two out of the three Qualifying Heats, the Finn also suffered a broken chain which pushed him back to 5th in the Intermediary Classification. Jussi managed the Prefinal with his brains and finished it 3rd, but he was only 5th after the second lap of the Final. Without panicking he rapidly recovered to 2nd and went after the Russian Kirill Karpov (Tony Kart-BMB), who had pulled a comfortable lead after his win in the Prefinal. The one and a half second gap melted like snow in the sunshine and Jussi Kuusiniemi definitively took the lead half-way through the race. While Karpov lost ground and fell back to 5th, Sweden’s Robin Hansson (Tony Kart-Vortex) created a sensation in the field by recovering from his 20th grid spot. He eventually climbed on the 2nd step of the podium ahead of the Finnish teammates Niclas Nylund and Joni Ruuskanen (both using ART GP-Parilla equipment).

Tipped as the big favourite of the KZ2 category (gearbox karts), Henri Kokko (Ninar-TM) was up to his reputation. From Qualifying Practice to the Prefinal via the Qualifying Heats, the Finn never left the first place. It is therefore quite logically that he dominated the Final and prevailed with a 12-second lead. After his 4th place in the 2011 European KZ2 Championship and his podium last year in this very Viking Trophy, Henri Kokko confirms that he is clearly one of the main Finnish Drivers to be watched in this category. He was accompanied by his compatriots Leevi Suonpää and Henri Mäkilä (both using DR-TM equipment) on the podium of a category which has unfortunately not enough entries.