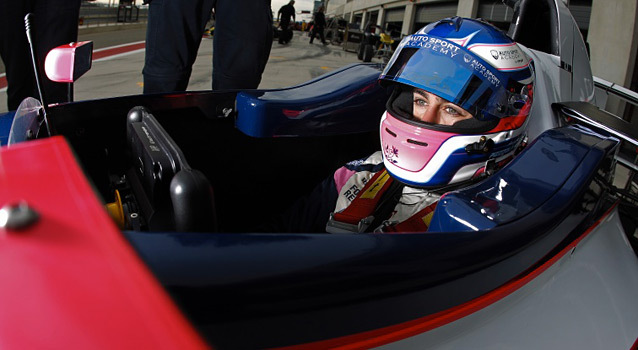 Today, Sunday, the Group B drivers were the first out for qualifying for the second race. There were a few drops of rain just before the green flag. The drivers went out on slicks but soon realised that rain tyres were the answer.

Oliver Rowland set a target time in 2m 57.454s in front of Esteban Ocon and Stoffel Vandoorne when the session was neutralised after Edolo Ghirelli (RC Formula) went off.

Vandoorne improved in the second part of the session to take provisional pole, but on his last lap Oliver Rowland went quicker and clinched a place on the front row in 2m 42.794s. The Racing Step Fundation driver beat Stoffel Vandoorne and Miki Weckstrom.

The Group A drivers went on out an increasingly damp track to try and beat the time set by Oliver Rowland. Not until the very end of the session were there any improvements and despite the rain Andrea Pizzitola was the first to knock Rowland off provisional pole with a time of 2m 42.291s.

Pizzitola went even quicker and the Frenchman clinched his first pole in the Eurocup Formula Renault 2.0 in the rain, conditions he doesn’t like very much.

Andréa Pizzitola: « Yesterday, I got fairly close to the pole in my group but my time was cancelled because of a yellow flag. That’s the rule. Today, I’m very happy to set pole even though I don’t like rain very much. I did a lap to get out of the traffic and then a flyer and on my second attempt I spun. I got away with it!”