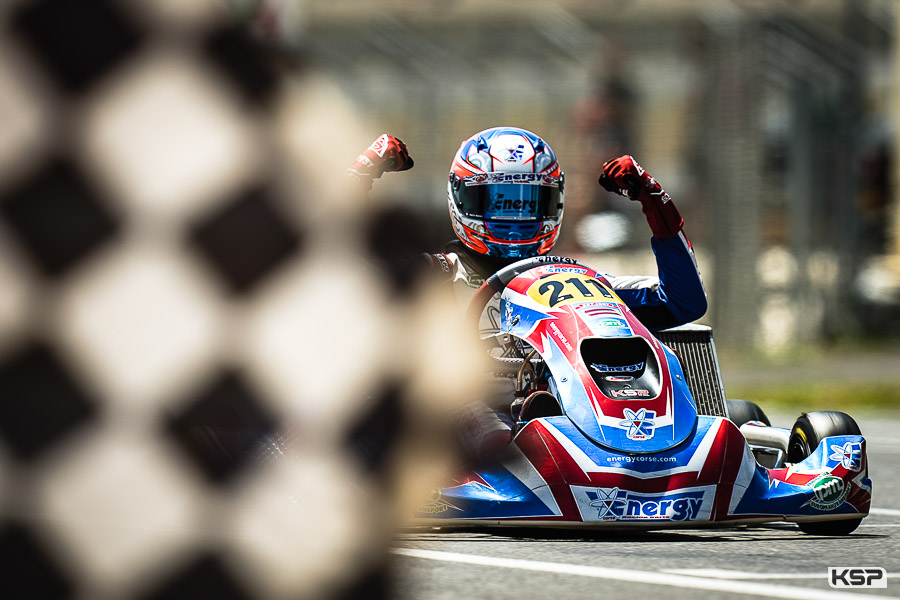 The final battle in the Euro Series was going to be intense with the OK title up for grabs by Joe Turney (Tony Kart/Vortex) on pole or Luigi Coluccio (Tony Kart/Vortex) 5th on the grid. The presence of Freddie Slater (LN/Vortex), Tuukka Taponen (Tony Kart/Vortex) and Kean Nakamura-Berta (KR/Iame) between the two contenders did not help to ease the tension. However the sky was still blue over Franciacorta with a 30° air temperature.

After four formation laps and two false starts, the race was finally on. Taponen took the lead over Turney while Evan Giltaire’s (KR/Iame) attempt to overtake ended in a pass in the dirt. Turney and Coluccio had a duel for 2nd place.

Slater moved up to 3rd ahead of Tomass Stolcermanis (Energy/TM) and Maksim Orlov (Parolin/TM). Nakamura lost several places, Coluccio crashed and lost his spoiler before returning. Arthur Rogeon (KR/Iame) was last. Taponen was a strong leader, but Stolcermanis went after him on lap 8. Turney was 3rd ahead of Maksim Orlov (Parolin/TM). Rintaro Sato (KR/Iame) had moved up 11 places to 6th ahead of Slater.

Alex Powell (KR/Iame) was 4th, 3 tenths behind Turney. Stolcermanis attacked Taponen on lap 14 to take the lead. Enzo Deligny (Parolin/TM) set a best time of 15th as he recovered from a difficult start. Slater went out in the barriers. Nakamura-Berta touched Turney when passing him and both lost places. With three laps to go, Powell passed Taponen for 2nd place, 1.7 seconds behind Stolcermanis. The Latvian driver from Energy Corse won for the second time in Franciacorta, far ahead of Powell and Taponen. Orlov finished 2nd in this crazy race after spoiler penalties for Powell (3rd) and Taponen (6th). Oscar Pedersen was able to climb 21 places to 4th place ahead of Gabirel Gomez (CRG/Iame). 11th on the line, classified 8th, Turney was nevertheless crowned while Deligny finally lost his 12th place with the fastest lap after a beautiful comeback due to a technical non-conformity.