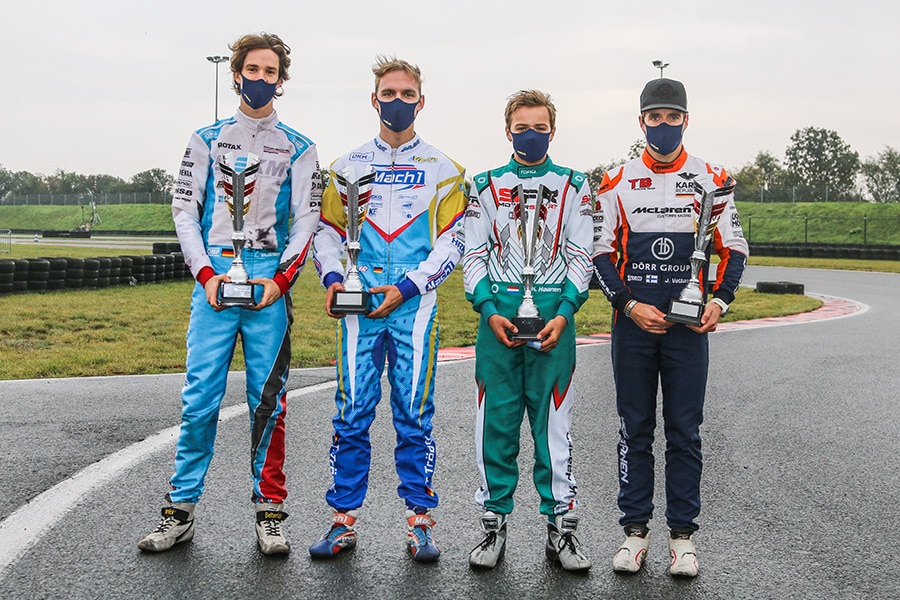 It was the German Kart Championship season’s finale last weekend at the Motorsport Arena Oschersleben and there were exciting races again. Next to DSKM-Champion Jorrit Pex, Juho Valtanen (DKM), Kris Haanen (DJKM), Tim Tröger (DSKC) and Luka Wlömer (DEKM) ended up on the list of Champions.

2020 was not an easy year for the German Kart Championship. The ongoing Corona pandemic caused a complete postponement of the racing calendar in the beginning and kept accompanying the German kart racing series. The races in Mülsen and Ampfing had to be cancelled. Two events in Kerpen, one in Wackersdorf and now in Oschersleben still made the shortened calendar of four weekends possible.

“In the name of the entire DKM-team and the DMSB, I’d like to thank all participants, teams and helpers for this year. It wasn’t easy for anyone, but that’s what makes the 2020 season special. Everyone gave their all and caused successful events in the end. I’d like to praise the Kart-Club Kerpen-Manheim, ACV Automobil-Club Verkehr and ADAC Ostwestfalen-Lippe, who accompanied us as organizers and also carried the additional Corona-regulations with us. Finally, I want to congratulate our Champions Juho Valtanen, Kris Haanen, Jorrit Pex, Tim Tröger and Lukas Wlömer on their successes”, DKM-series coordinator Stefan Wagner summed up.

Just as in Wackersdorf, the weather caused lots of diversions this time as well. The whole weekend the weather was quite unsettled and demanded clever choices regarding the tires. As winners, Juho Valtenen (DKM), Mathias Bjerre Jakobsen (DJKM), Lasse Karlshøj (DSKC) and at the DEKM Diego Stifter and Axel La Flamme prevailed. Regarding the fights for the Championships, Juho Valtanen (DKM), Kris Haanen (DJKM), Tim Tröger (DSKC) and Luka Wlömer (DEKM) received the trophies. Due to the cancellation of the DSKM, Jorrit Pex was the Champion already and therefore won the German Shifterkart Championship for the seventh time. 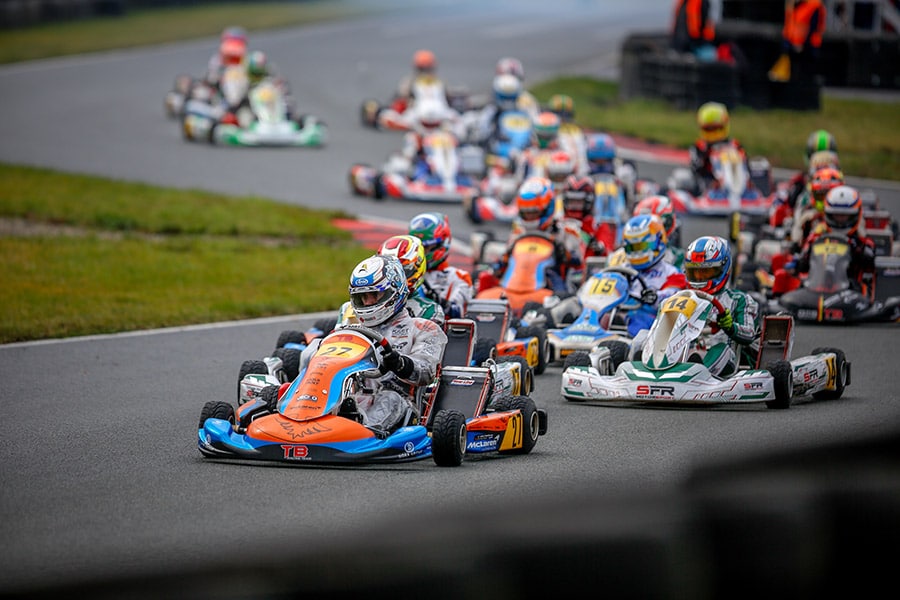 DKM: Double victory and Championship for Juho Valtanen
Juho Valtanen (TB Racing Team) was unstoppable in the German Kart Championship. From qualifying over both heats and finals, he led the Championship and brought the DKM-Championship trophy back to Finland after Paavo Tonteri in 2016. “This was a great weekend for me. I won everything and thereby paved the way to the title. Thanks to Thomas, Kart Republic and everyone involved in this success”, he summed up the final weekend. On the following positions, the places were taken towards the middle of the race as well. Ben Dörr (TB Racing Team) fought his way forward from eighth starting position to third place and kept very close to second driver Luca Griggs (SFR Motorsport) for quite a while – but the Hessian wasn’t able to attack before the end of the race anymore. Behind them, the places were taken early on by Joel Mesch (TB Racing Team) and Juliano Holzem (SFR Motorsport) as well.

Ben Dörr achieved a great start into the second race and kept very close to the leading driver. Temporarily, it seemed as though Dörr would achieve his second victory of the season, but nothing changed regarding the positions in the end. Behind the Kart Republic-duo, Griggs, Holzen and Mesch drove a calm race as well and ended up in the top five again. This meant winning the Vice-Championship for Griggs. “We didn’t have the perfect package this weekend and weren’t able to attack throughout the entire race. That cost us the chance of winning in the end,” said the Tony Kart driver in his interview. 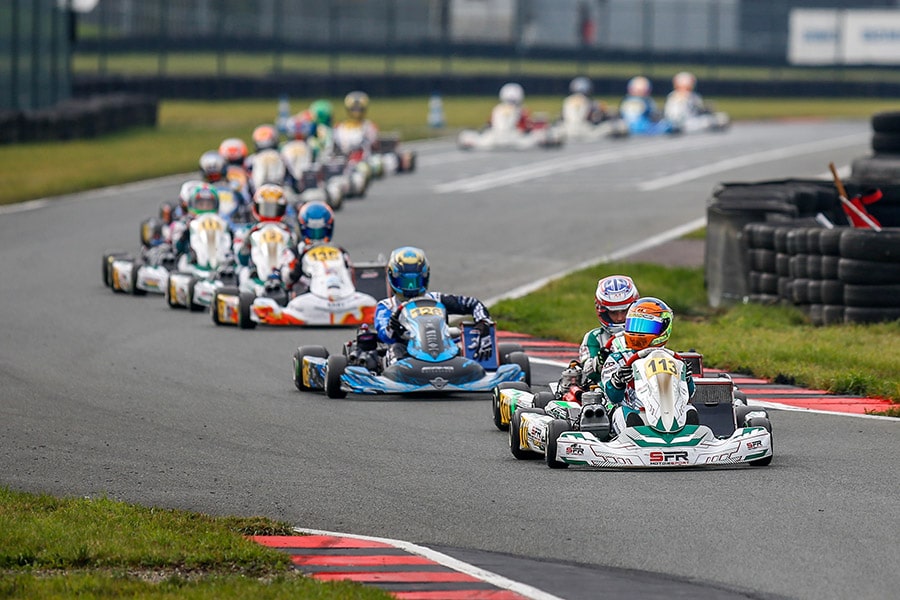 DJKM: Mathias Bjerre Jakobsen ends Kris Haanen‘s winning streak
Dutchman Kris Haanen (SFR Motorsport) already was the new Junior Champion after the event in Wackersdorf. With six victories in six races, he had gotten so far away from his opponents that they didn’t have a chance of catching up with him anymore. The fight for Vice-Championship was still open though. With the best time at qualifying, Mathias Bjerre Jakobsen (RS Competition) achieved the best start into the final weekend. Haanen came back during the heats though and regained the top position.

From pole position, he took the lead during the first final race. From behind, Herolind Nuredini (CV Performance Group) and Jakobsen came close though. Towards the middle of the race, both of them drove past the leading Dutchman. Towards the end, Jakobsen had the most reserves and still managed to overtake the German driver. At the finish line, Mathias Bjerre Jakobsen celebrated his first victory of the season in front of Nuredini and Haanen. “I managed to drive off a little and kept my lead until the end of the race. It’s a great feeling to win at the final event”, the Dane rejoiced. In the fight for fourth position, Douwe Dedecker (TB Racing Team) came out on top. He received a spoiler penalty though and was only ranked eighth. Daniel Guinchard (SFR Motorsport) inherited his place in front of his team mate Paul Ducoffre.

The last race of the year was highly exciting once again. Jakobsen and Haanen drove off from the field of pursuers early on and wanted to decide the victory between them. But from behind, Belgian Douwe Dedecker raced forward: During the last lap, he drove past Haanen. During the last bend he then also overtook the leading driver Jakobsen and won. Unfortunately the joy was only short-lived: A five-second-penalty threw him back to sixth place. One place behind him was Haanen, who received a spoiler penalty after the race. The new top five were made up of Jakobsen in front of Nuredini, Guinchard, Kiano Blum (TB Racing Team) and Marius Kristiansen (HK Motorsport). The new Champion Haanen was very happy to hold the trophy in his hands in the evening: “Today is my birthday and I couldn’t have given myself a greater present. It was a very special season for me and I’m very proud to have won. The whole team supported me and a part of this success belongs to them as well.” 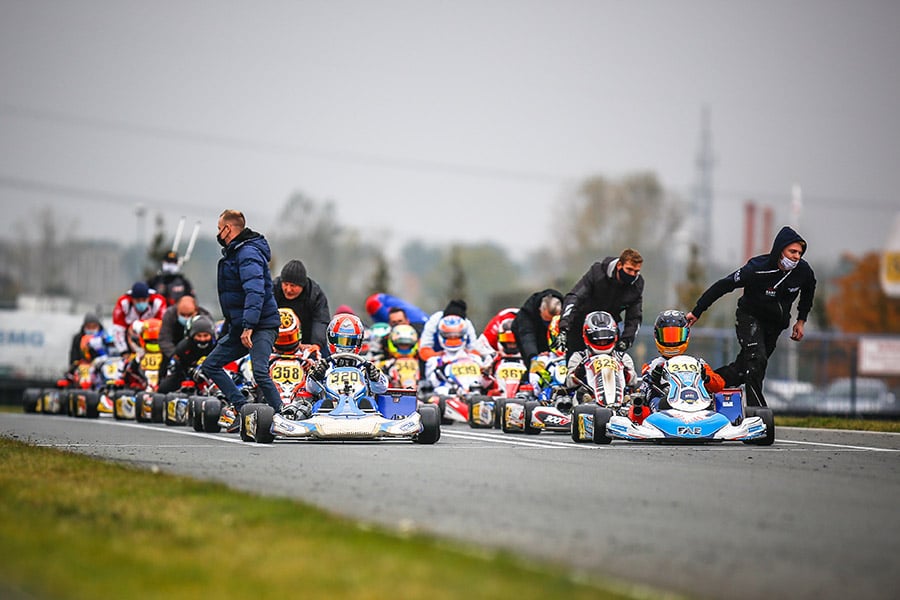 The field was divided into two classes for the pre-finals again. Tröger lost his lead to title opponent Doorn during his race. When trying to regain his leading position it came to a collision and both had to drop out of the race. Happy third driver was Julian Müller, who won after 20 laps. During the second pre-final, Karlshøj and Simon Connor Primm (Valier Motorsport) decided the victory between them. After 20 laps, rookie Primm prevailed and won.

After the dry pre-finals, the weather wasn’t good to the drivers during the final. Right on time for the start, rain set in and complicated the race – all participants drove with slick tires with no profiles. A fight worth seeing was being fought at the front by Müller and Karlshøj. The two drivers switched positions numerous times. With the rain getting heavier and heavier, Karlshøj came out on top in the end though and celebrated his first victory of the season: “This was the most difficult race of my career so far. The conditions changed every lap, there was almost no grip and all I could do was try to keep the kart on the track. This victory is a great success for us; I’d like to thank the team for their great job.” The fight for the remaining places was very narrow: The entire remaining field was so close together. In the end, Primm came in third in front of Marvin Langenbacher and Paul Voegeding (Mach1 Motorsport). Tim Tröger only came in 15th, but still won the Championship. “I want to thank my team, my mechanics and engine-tuners. Everyone did a great job and contributed to this success. We’re going to attack again next year”, he rejoiced about winning the title.

Regarding the team Championship, the trophy went to SFR Motorsport this time. The new team won the DJKM-title with Kris Haanen and the DKM Vice-Championship with Luca Griggs. Team leader Willemjan Keijzer was surprised when he received the trophy: “The whole team contributed to this victory. We were a convincing new team and everyone did great work. We’ll be back in 2021 and want to defend the title.”

With the final event in Oschersleben, the DKM is now going into winter break. The team is already working on an attractive program for 2021. Then, the German Kart Championship is supposed to consist of five races spread all over Germany and the bordering countries again.