F4 Academy: David and Bernier confirm their titles in Race 3

The French F4 Champion of 2019, Hadrien David, celebrated his crown with another podium in Race 3. Freshly titled in Junior, Victor Bernier won the last race of this Championship, which ended with a magnificent field of 23 cars. 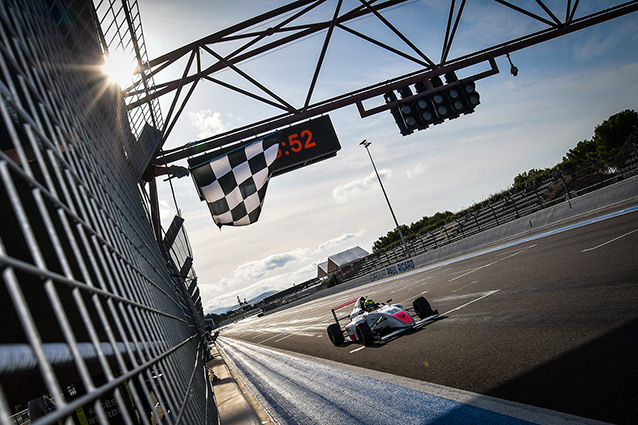 The final round of French F4 Championship was the image of the whole season: captivating and exhilarating! The use of two “joker” tyres, once in the year, added a little spice to the final meeting, as many drivers waited for the trip to Paul Ricard to use this advantage. Thanks to his double pole position taken on Friday, Hadrien David started from 1st place and maintained the leadership when the lights went out. But Victor Bernier quickly put the pressure on in Hadrian’s wheeltracks.

“I was already the fastest in Race 2 and I was confident for this final showdown, when I needed to make the most of my two new tyres,” commented Victor. “That’s what I managed to pass Hadrien on the second lap. Then I needed to increase the gap to safely manage the end of the race. This result means I will move up to 4th in the Championship, while I was far away at the beginning of the season. The title of Academy French Junior Champion is the icing on the cake! I am happy to have achieved my initial goals.”

Henrion finishes on the podium
Behind him, the suspense lasted until the end for 2nd place, with the return of Gillian Henrion behind Hadrien David. “It was a great duel, I was lacking only 45 thousandths to overtake Hadrien,” said Gillian. “But the important thing was to finish on the podium in this last race, to get noticed at the end of the season and to validate my top five in the championship.“

“It was not an easy race, because some of my opponents used their “joker tyres“, admitted Hadrien David. “I was still a little stressed at the beginning of the meeting, because it is here at Le Castellet that the title was decided. Finally, I am French F4 Champion, which was the goal and, on a personal level, I am satisfied with the statistics, with a total of 10 pole positions, seven wins, as well as many podiums and fastest laps. This title is very important for my future. I want to pay tribute to my runner-up, Reshad De Gerus, who pushed me throughout the seven meetings in 2019.”

Duels for places of honour
Determining to increase his number of successes in this very formative Championship, Nicky Hays had to settle for less. “I may have overloaded my tyres in the first few laps and the car started to vibrate, and it became more and more difficult to handle as the laps went on. Fortunately, the final podium of the French Championship was already assured,” said the American driver.

Indeed, Hays did not manage to contain Isack Hadjar, who finishes his year with a 4th place after a certain lack of success on Saturday. The French Junior Vice-Champion will have learned a lot during this season full of promise.

In the wake of his magnificent victory the day before, Jules Mettetal again showed good speed and finished 7th in the wake of Hays. Enzo Valente, who was often impressive this weekend, beginner Sami Meguetounif and Swedish driver Simon Ohlin completed the last very international top 10 of 2019.

“This race at Paul Ricard confirmed the particularly high standard of the Championship. No less than 12 drivers have managed to win a race during the season, which shows the quality of the grid. It was not until the last weekend that the Championship was decided. Congratulations to Hadrien David, the Champion, and to Reshad De Gerus, his runner-up, as well as to the American Nicky Hays for his great season and his final podium. Victor Bernier was able to rise to power and snatched the Junior title at the end of the season against Isack Hadjar, also very promising. The reputation of the French F4 Championship remains very high, as evidenced by the 2019 seasons in other categories for our alumni like Theo Pourchaire, Arthur Leclerc and Caio Collet. Also worthy of mention is the magnificent 23-car field, which makes this competition one of the major F4 championships in Europe. Trained in the French Junior Karting Championship, Sami Meguetounif and Esteban Masson achieved magnificent performances for their first single-seater race. All these reasons confirm that we should still have a formidable French F4 Championship in 2020, with new features to come…“